The dark truth about Australia's addiction to poker machines is exposed in a new ABC documentary. 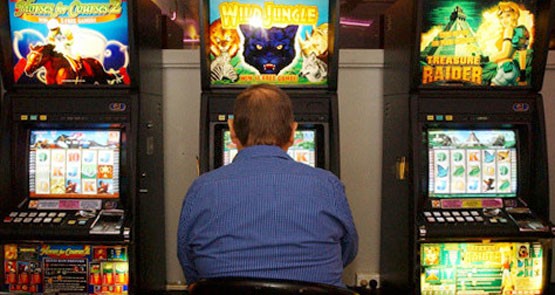 Carolyn Hirsh, the whip in Joan Kirner’s Victorian Labor government, voted to pass legislation allowing poker machines in Victoria. A few years later, she was desperately addicted to the machines.

Hirsh’s problem began when she saw a hotel offering free breakfast. She saw rows of pokies inside, and figured she’d see what the fuss was about. She put in a bit of money. Her addiction slowly grew from there, she told the producers of Ka-Ching: Pokies Nation, which airs tomorrow night on the ABC.

Some time later, her daughter committed suicide. Hirsh discovered her daugher’s body — the image of it haunted her. But she found that the pokies soothed and comforted. “It was a place where you could get lost in that world where nothing else mattered. Like a hypnotism,” she said.

“It is solitary. Like what I’ve read of opium dens, people lying on little mats smoking opium. Alone, but being soothed and comforted.”

Hirsh lost thousands to the pokies. Her grief is palpable on screen. “I’ve hurt my family so much,” she said.

Her story is not unique. Australia has more poker machines per head of population than anywhere else in the world, and the toll on individuals, families and communities is widely known. In 2010, in a bid to retain power, the Gillard Labor government reached a deal with independent Andrew Wilkie to introduce a number of measures aimed to curb poker machine addiction by giving addicts the tools to control their spending. The policy awakened a sleeping giant, as the gaming lobby brought its significant resources to bear opposing the measures, promising robust anti-government campaigns in marginal seats should they go ahead. The push was unsuccessful: the Gillard Government’s support for Wilkie’s measures was dropped as soon as they no longer needed his parliamentary vote.

To the public, the gaming lobby talked patriotism and liberty. It’s “unAustralian” to police how people pass their time, the pitch went. Problem gamblers were a small percentage of pokies users, and it wasn’t fair to place limitations on everyone else who enjoyed a spot or two at the pokies every once in a while. The pitch was about individual responsibility.

But Ka-Ching dismisses this argument. Most of its screen time is devoted to in-depth interviews with poker machine designers about why they make the choices they do.

“The purpose of the film is to shift the debate significantly from what happened before  — away from the individual gambler, which is what the gambling industry is very keen to lay it on,” producer Mitzi Goldman told Crikey. “What our story tells is the responsibility is with the industry and with government.

“It’s important to shift awareness away from weak individual and focus on the machine. It’s predatory and addictive. And has a direct line into your brain.”

The exact nature of this addiction is outlined in astonishing detail throughout the documentary, through interviews with numerous neuroscience experts. But the film’s big “get” is detailed commentary from a trio of Americans who usually operate behind the scenes. Experts at the top of their game, they reveal why they design poker machines the way they do, from the sound to the graphics to the spin of the wheels. Perhaps the most gripping of these interviews is with mathematician Michael Shackleford, dubbed “The Wizard of Odds”, who designs the mathematics logic of poker machines through spreadsheets he then delivers to manufacturers.

On most casino games, the house take is between 1-2%. On poker machines, it’s far, far higher. On average, the house takes about 10% of each bet placed on a poker machine. This, of course, means gamblers lose far more, far more quickly on pokies than on other forms of gambling.

He says he can set a machine so that it returns a higher or lower percentage of gamblers’ money. If gamblers are losing too much, too quickly (say, the machine is returning only an average of 85% of their investment on each spin), they are more likely to walk away. So sometimes it is more beneficial for the machine to give users more of their money back and take perhaps only 5% of each bet, on average, to keep them coming back for more.

“In Australia, they’re all set to between 85%-92%. And that’s just awful. I have such pity for the people who play them because I know what an awful bet they are.”

The voice missing in the documentary is that of the poker machine industry in Australia — it is represented only through news footage and the like. Goldman says producers approached Australia’s major poker machine companies for interviews, but were rebuffed. Some operators of  poker machines in Australia did appear, such as the head of the Fairfield RSL, which derives most of its budget through its pokies, and Liam O’Keefe, publican of Sydney’s Welcome Hotel — one of thousands of small businesses and enterprises reliant on the money from pokies revenue to stay afloat.

“[They are] hidden away … probably [because of] my shame in having them,” O’Keefe said. “If you went to a small bar and you said, ‘Here’s $100,000 a year for turning on a switch’, it’s a tough thing to not want to do. The business is addicted to poker machines.”

As are Australia’s governments. Of the $12 billion spent on the pokies each year, $4 billion goes to Australian governments. This comprises between 5-8% of the revenue of most states.

The film’s executive producer is lauded ad-man Neil Lawrence, the brain behind the Qantas (Feels like Home) and the 2007 Labor Party (Kevin 07) campaigns. He died suddenly, during a surfing holiday in the Maldives in July. The film was fully completed and delivered to the ABC at this point, so he got to see the finished product, if not the final edit.

“This was really Neil’s passion project, and he brought the project to me,” said Goldman. “We worked together very closely together over the last four years on it. He saw the finished film. But he won’t get to see it aired.”

Australia’s pokies: a tour by numbers

I fear the addiction is epidemic & so potent that even when poker machine ‘players’ are made aware of the abysmal odds they will not be put off.

ZUT: Well said. Do the addicted even realise they are addicts, or do they tell themselves it’s all for a charity, or some such thing?

As with too many addictions currently causing major problems, there seems to be no willingness to analyse them using factor analyses rather than simple correlations.
Why doesn’t Crikey take the lead on such issues?

In a comparison of states, Victoria reaps the largest tax revenue percentage from gambling (the NT has a similar per capita tax revenue). And the other states are jealous rather than appalled. Nothing is said about this epidemic by the major parties at election time.

To obtain revenue our State and Federal Governments are prepared to expose the population to addictive and socially destructive industries. The alcohol, gambling and. until quite recently, the tobacco industries have been cossetted and encouraged by governments that refuse to recognise the long term health and financial damage done to the population by these rapacious industries. Our governments refuse to protect us from industries that prey upon the vulnerable members of our community claiming to do so would be “nanny state” government and infringe on one’s personal freedom. (Stressless euthanasia being barred from that freedom of personal choice) Does the Liberal Party still accept donations from Big Tobacco? Are there tax concessions for gambling establishments that masquerade as sports or veterans clubs? Do taxpayers prop up the racing industries?