Agriculture Minister gets the last laugh ... is our Water Minister wearing makeup? ... member for New England just wants out ...

Take that, Pistol and Boo. The Agriculture Minister got into a spot of international bother a few months ago when he told Johnny Depp’s dogs to “bugger off” back to the United States after they were sneaked into Australia while the film star was in Australia filming the next Pirates of the nobody-asked-for-this-sequel. It seemed all over when, after the dogs left Australia, and Joyce tweeted simply “dogs gone”. The fracas led us to one of our favourite Barnaby video mash-ups: 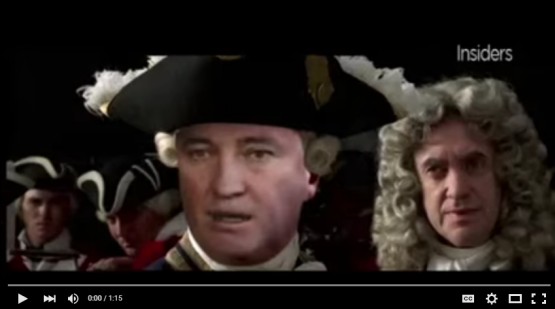 Depp said in response that he “killed and ate” the dogs on the order of “a sweaty, big-gutted man from Australia”.

But Barnaby has had the last laugh yesterday, tweeting a photo of Harvey, a dog that had complied with quarantine rules. Who’s a good boy? Who is? You are, Harvey! What a good boy! 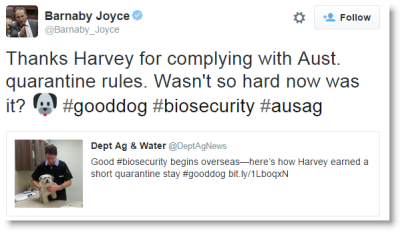 The makeup maketh the man. We have heard to reduce the red complexion the member for New England is well known for, he has, for the last few months, been wearing makeup foundation during question time. 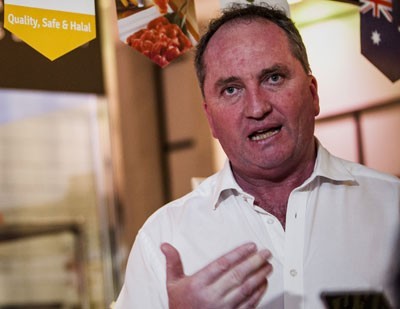 Triple J’s Alice Workman tweeted to this effect back in March. If you’ve watched question time recently, you would have noticed the Agriculture Minister getting fired up about his new water portfolio, but without the trademark redness we’ve come to know and love.

Australia and Indonesia, just like parasites. Our pale-complexioned next deputy prime minister Barnaby Joyce rarely leaves the English language undamaged during his trips to the dispatch box, but on Wednesday in question time the Agriculture Minister left us wondering if there was something profoundly wrong in our relationship with Indonesia. After first lauding Indonesian Fisheries Minister Susi Pudjiastuti, who has “shown us not only how you stop the boats but how you can burn them to the ground” (yeah, we did a double-take too), he went on to declare that Indonesia and Australia “have a symbiotic relationship”. Symbiosis, as normally understood, refers to two different species interacting with each other, frequently in ways that aren’t mutually beneficial — like a parasite living off a host. Quite who is the parasite and who is the host in the Australia and Indonesia relationship, and which species each one is, remains a Joyceian mystery.

The birds and the bees explained. “Honey comes from bees — the definition is clear. If it’s made from synthetic or other ingredients, it’s not honey.” Agriculture Minister Barnaby Joyce is sending a strong message to protect Australians against what he has termed as “funny honey”, which are products labelled as honey, but not actually from bees. Honey will be tested, and the ACCC will be on the look out for funny honey, he has warned. Bees, you are on notice.

I just want to go home. And finally, it has been a long week, and we’re all about ready to go home. One member of parliament was caught saying as much while the microphones were turned on during a press conference on Thursday. Did he learn nothing from Peter Dutton’s not-so-secret joke about Pacific Islands suffering due to climate change? Oh well.

Surely symbiosis refers to a relationship that benefits both parties – eg rhizobium bacteria and legumes?

As appalled as I am to find myself sticking up for Barnaby Joyce, to say that “Symbiosis, as normally understood, refers to two different species interacting with each other, frequently in ways that aren’t mutually beneficial” is almost the opposite of correct. Symbiosis, by defnition, benefits both organisms. That’s what differentiates it from parasitism, where one organisim benefits to another’s detriment.

Barnaby does use Manglish, for sure, but this time the old darlin’ was correct and you really must check before you point the finger at him. Oxford Dictionary: Symbiosis. Interaction between two different organisms living in close physical association, typically to the advantage of both. Compare with antibiosis.

Not only was the florid Barnaby Joyce correct in using symbiosis but he applied the perfect vernacular ‘bvgger off’ when advising Pistol & Boo.