Early indications are that Malcolm Turnbull's ministry will be a success -- except in a couple of crucial areas. 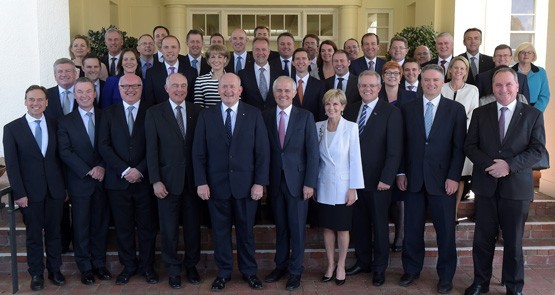 With the Turnbull government four weeks old, ministers are still finding their feet in new portfolios, adjusting to ministerial life altogether or getting on with their old jobs. But some early impressions are already clear if we run the ruler over the new ministry:

Kelly O’Dwyer has shown how ill-advised Tony Abbott was to leave her on the backbench in 2013. She performs strongly in Parliament — unusual in a newcomer (people like Greg Combet and particularly Bill Shorten struggled at the dispatch box when first promoted) — but her first big test will be with the release of the much-delayed Murray Financial Services Inquiry response, said to be imminent.

Simon Birmingham, the South Australian moderate and one of the architects of Tony Abbott’s downfall, wasted no time in ditching (sorry, “suspending”) one of the bigger albatrosses around the Coalition’s neck, its higher education reforms. He’s now reset that debate — most crucially with the crossbenchers in the Senate, who are likely to find their colleague a more genial interlocutor and negotiator than the “fixer” he replaced.

And speaking of Christopher Pyne, the shift to Industry appears to have invigorated him, if only because it gives him a direct role in policies that could save his seat. You always got the sense that Pyne wasn’t overly interested in education — remember when he dismissed the Gonski report less than two hours after it was released, and his attempt to abandon the Gonski reforms was the first big stuff-up of the Abbott government in 2013? A more interventionist portfolio like Industry might suit the most archetypically South Australian of ministers.

Michaelia Cash had an early opportunity with the first significant announcement of the Turnbull era — an additional $100 million domestic violence package (prepared by Tony Abbott, which is why it was good to go so early) — and has since dangled some red meat before the party base by talking about penalty rates — while being careful to flag that any changes would go to an election first.

Cities Minister Jamie Briggs has a promising mix of economic rationalism and urban infrastructure — if any politician is going to put some serious effort into road pricing in Australia, it’s the South Australian who was brave enough to call for an end to car industry subsidies. He’s also the focal point of a looming tension with the government — Warren Truss’ obvious lack of interest in urban infrastructure and transport compared to rural boondoggling. Briggs is in the Environment portfolio, and has no money to spend, and has to compete with Paul Fletcher, who’s in charge of Major Projects, who is in Truss’ portfolio. Confused? So you should be.

Yet to trouble the scorers

New Social Services Minister Christian Porter has been keeping quiet; those who don’t watch politics for a living might be confused as to who that stranger is sitting on the frontbench. So far, his only achievement is to be the briefest-ever Aged Care Minister.

Mitch Fifield Steady as she goes stuff from the new Minister for Communications, whom you wouldn’t expect to be charting his own course just yet given his predecessor is now the PM.

Mal Brough is back in the ministry eight years after the Ruddslide took away his seat, but we keep forgetting he’s there.

Julie Bishop Still performing well, although the “only adult at the kids’ party” look she often had under Abbott has been replaced with a more relaxed appearance. Perhaps it’s the dearth of Credlin in her life.

Andrew Robb keeps on keeping on, hugely successful at his job of achieving economically “modest” (according to the Productivity Commission) trade agreements and making the world safe for large US corporations. A star performer under Abbott and so far under Turnbull as well.

Sussan Ley, despite a wobble with the doctors’ union over the Medicare Benefits Schedule review, has neutralised health as a negative for the government — under her predecessor Peter Dutton it became a running sore around the bungled GP co-payment. Under Turnbull, Ley’s first task was to fix another Abbott-era error — retrieving aged care back from Social Services, on which she moved swiftly and successfully. The mental health review response is the next big challenge — and will Turnbull follow through on his commitment to a less command-and-control governing style? Health has — under both sides — traditionally been a portfolio where the real control lies in the PMO.

Greg Hunt is still, shall we say, flexible. This week, renewables are fashionable, so he’s spruiking clean, green power like he never slashed the Renewable Energy Target, celebrated repealing an effective, low-cost carbon price and established a corporate welfare scheme masquerading as a carbon abatement mechanism.

Mathias Cormann, our favourite minister, has kept out of sight — like there’s a FREEEEEZE on his appearances — doubtless busy preparing the Mid-year Economic and Fiscal Outlook since he’s now the fiscal corporate memory of the entire government, or maybe licking his wounds after the ouster of Abbott.

Marise Payne has taken the big step from Human Services to Defence in her stride, and apart from anything else it was a positive to see two female Australian ministers facing off with John Kerry and Ashton Carter at the AUSMIN talks. Still, Defence has been the graveyard of many competent ministers…

Peter Dutton is tasked with solving one of the government’s most vexing problem: how to end our operation of an open-air rape camp on Nauru without either admitting we’re actually responsible for it (all inquiries should be referred to Nauru police, thanks very much) or providing an incentive for a new wave of boat arrivals. The endless litany of tales of abuse from Nauru have begun to shift public opinion from its stalwart “lock them up and forget them” mentality that both sides pandered to until recently. Dutton’s problem beyond his own clumsiness is that he has a department that believes it’s a paramilitary force that can treat due process and basic rights with contempt.

Stalled on the grid

Josh Frydenberg took to his new portfolio of resources less like a duck to water than a canary to a coal mine. Singing the praises of coal as if Tony Abbott were still in power, Frydenberg hinted that the government would be prepared to help out Adani’s vast white-elephant-in-the-planning, Carmichael. When even the uber-rent-seekers Glencore pointed out this would be a waste of money given any number of shuttered coal mines on existing rail lines were available for a song, Frydenberg was suddenly, “what subsidies?”

Scott Morrison is the serious one. Morrison has had a poor start. Treasury is obviously a tough brief, and it’s early days. He still sounds like a cross between Abbott and Hockey, but more problematically he hasn’t settled on the government’s economic narrative yet, either on the budget — he’s persisting with this “we don’t have a revenue problem” nonsense — or on the economy. For Australia’s sake, Morrison needs to make a success of his new gig. Next test — the Murray Inquiry response, with O’Dwyer, and then MYEFO with Cormann.

As for the boss

Malcolm Turnbull‘s had a ripper of a start. Two things stand out: when he decided not to have a media conference after his mini-economic reform summit, demonstrating that the rather verbose ex-lawyer understands that sometimes a Prime Minister doesn’t need to say anything. It’s a lesson Tony Abbott tried to implement early on and found he couldn’t. And yesterday’s response to Labor’s attack on his tax affairs, about being wealthy because of both hard work and luck, showed you can ruthlessly cut down your opponents without the aggression and negativity that characterised Tony Abbott. So far Turnbull has looked anything but the hot-headed, arrogant leader of 2009, doubtless because he understands he has sources of danger behind him as well as across the dispatch box.

Morrison – who put that cement in his saddle-bags, and why?
[(“Clowns to the front of me, clowns to the back of me.
Here I am stuck in the middle of ewes.”)]

Arthur’s job is to pop his head out into the public foyer every now and then, like old Mr Grace, and soothingly tell us: yes, they’re all doing very well…

It all looks a bit same same to me. I can guess what’s coming next, rob the poor and keep the rich happy.

BK, intersting synopsis, but I think you are jumping the gun saying they will be a success:
Hunt and Frydenburg: The Adani mine will be a millstone around their neck the next election and after Paris. Both haven’t got a clue what needs to be done to address climate change, apart from dig up more coal to burn! Frydenburg was even recently (post-Abbbott) mouthing the furphy that we are stalling the development of the 3rd world in Africa by not selling coal. Meanwhile, we have had the hottest September in records.
Pyne: “the shift to Industry appears to have invigorated him”. I haven’t heard they are building subs in SA, only choosing which sub to buy. Meanwhile, over the horizon, the closure of remaining car making and no idea how to address the resulting considerable unemployment.
ScoMo: Can’t keep his mouth shut about economic reform; read Work Choices was not too bad, just misunderstood. What is he going to do about addressing taxation disparity between his mates and the rest of us.
Cormanator: He’s looking for his cigars (I think Uncle Jo might have taken the rest of the box with him);
Dutton: Who briefs him? Todays sound bite about the seizure of tobacco by Border Force and stating it will keep cheap tobacco off the streets and away from children; WTF? More likely, the revenue they would have missed out on from duty and GST. His comments were painful.

I wonder how much of Turnbull’s wealth comes from his banking days – in one of the perpetrator banks of the global financial crisis that was and will be. Is there no stigma attached to such a role?