Media briefs: Lyall Mercer is not in hiding … Latham on show, but no one’s watching … Rundle saves <em>The Verdict</em> …

Even the Mark Latham factor can't save The Verdict. And other media tidbits of the day.

I’m not hiding! Brisbane-based PR operative Lyall Mercer disputes Crikey‘s suggestions that he has gone to ground, after we reported on Wednesday that he’d upped the setting on his social media accounts after being slammed for releasing the name of an alleged rape victim on behalf of his client, the Nauruan government.

“We are simply focused on servicing our clients in the manner we always have, rather than answering ridiculous questions no one in Australia cares about, like the settings on our social media accounts. Just because we choose not to give a particular journalist a response to questions doesn’t mean we are hiding,” Mercer’s company Mercer PR said in a statement.

The statement also hit back at industry body the Public Relations Institute of Australia for condemning Mercer’s release of the information, through an attached police report distributed to some journalists, which we reported on yesterday. Mercer PR says it is considering its legal position “in regard to the defamatory statement issued by PRIA”. The release, which can be read in full on Mercer’s website, continues:

“Completely contrary to reports, neither our client or our company has published the name of the person in question. We are not a publishing company. Only the media can publish and her name has not been published anywhere. Her name was not even ‘released to the media’ as many reports have said.

“Our client — not our company — merely provided background information from a police investigation to a very few media outlets who we understood already knew the details. The media release sent generally by our client via our office did not contain her name. Ironically one of the main media outlets condemning us and our client was not even sent the report.”

The argument that releasing something to journalists doesn’t count as releasing it was also made yesterday by the Nauruan government. — Myriam Robin

Scholarship in memory of Balibo Five. In remembrance of the 40th anniversary of the murder of the Balibo Five, as well as the upcoming 40th anniversary of the murder of Australian AAP/Reuters journalist Roger East, journalists’ union the Media, Entertainment and Arts Alliance has announced a new scholarship that will pay for East Timorese journalists to study short courses at major Australian journalism schools, and potentially also do work placements in print or broadcast newsrooms.

“We believe a practical program like this is the most appropriate way for our union to honour and commemorate the Balibo Five and Roger East,” MEAA president Paul Murphy said.

“A little over a decade since East Timor became an independent sovereign state, press freedom is still fragile and there are few formal structures to develop journalism skills.

“By providing a scholarship for journalists from East Timor to study and spend time with experienced Australian journalists, we hope that we can help build a strong free press there.” — Myriam Robin

No one cares anymore. Mark Latham seems to finally have admitted he was the one behind the @RealMarkLatham Twitter account. But barely anyone was watching.

Channel Nine’s The Verdict scored only 369,000 metro viewers last night, down from the 520,000 it had last week. It’s almost certain not to be renewed past its initial five-episode run. An apparent admission from Mark Latham, which he famously refused to give at the time when people were dying to hear it, did little to improve the figures.

It was host Karl Stefanovic who raised the question, asking Latham whether he was the one who operated the abusive account. In response, Latham said:

“In November last year and again in January this year, The Australian reported that I was tweeting, and from that point on it became a case study of a bunch of silly journalists and some other people beating themselves up on Twitter with ‘is @therealmarklatham the real Mark Latham?'”

It wasn’t really an answer, so Stefanovic asked again.

Hmmm, was that an admission? Certainly sounded like it, though some were still left scratching their heads. And Latham disputed that it was the reason he had resigned from his column at The Australian Financial Review. “The reasons for my resignation essentially are between me and the editor of the newspaper.” — Myriam Robin

How to save The Verdict. When Mark Latham gave his great raging, unhinged performance at the Melbourne Writers Festival — one of those “wankfests” he makes a great deal of effort to get to — it reminded many a film buff of something, couldn’t quite put their finger on it … of course! Crazy Howard Beale, played brilliantly by Peter Finch in the 1976 film Network — in which a burnt-out newsreader, sacked in favour of a new brainless schedule (featuring a proto-reality TV show focused on a cell of violent Maoists), has a breakdown live on air and tells his viewers: “I want you to go to your window, open it and shout ‘I’m mad as hell, and I’m not going to take it anymore!'” The event is such a success that it becomes a regular part of the schedule until (spoiler alert) the Maoists shoot Beale live on air, in the final episode of both shows.

With The Verdict tanking worse than The Bolt Report, it’s clear that the producers should rewatch Network. Or watch it. Or watch any movie before Transformers 3. Because who wants a pseudo-Q&A, with none of that show’s genius for ceaseless invention? We want Crazy Mark Latham! Piff off those other five and the host, and just have Latham in a chair, fed topics, either by an interesting antagonist — thinking Helen Razer — or simply by a workie, or even with a topic coming up on screen as a subtitle.

In this new format, Latham simply expiates against the clock on a range of topics — women, selfie sticks, imputed stamp duty, women, Kevin Rudd, breastfeeding in cafes, #illridewithyou, women, teal as a summer colour option, women, women — without drawing breath. Charities run sponsor campaigns (“can Mark do two minutes on meals being served on a board, to help Punchbowl High get a badminton court?”), with side bets on: total collapse, confession of being a North Korean agent, punching out the camera guy, etc. The audience could have cards, like diving judges and give him an overall rating.

You’d watch that? Hell yeah, you would. So would we. So would Mark, later, on Betamax (“a real western suburbs video format!”). Would there be any concern that he might be shot? Ha, no Mark. You’re not getting out that easily. — Guy Rundle 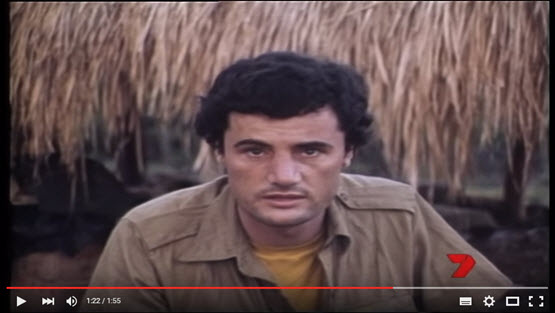 Rundle has hit on a workable concept that no commercial TV network would have the nerve to trial.

The Betamax crack is a classic.

And Latham could be seated in a chair suspended above a water tank, and if viewer voting demanded it, be dumped without warning.

I’d probably watch that for at least 10 weeks…with the sound off.

Grundle has a constant problem writing on his iThingy with its unAutocorrection – did he really mean that mad Mark ‘expiates’?
Hard to imagine.
On tuther hand, to watch him “expatiate”? At tedious and obfuscatory length – yeh, as long as we had to option to douse him, regulary.
KevH – me three!

I know what… how about a JOINT pitch for RT’s Comedy Channel….

@AR – of course Latham can fill the whole show expiating. He has a lot to expiate for. And it seems (I did not watch it) expiate he did – the “realMarkLatham”‘s bile belonged to hime indeed. Expiation