No one has ever been prosecuted for the cold-blooded murder of Australian journalists in Indonesia. 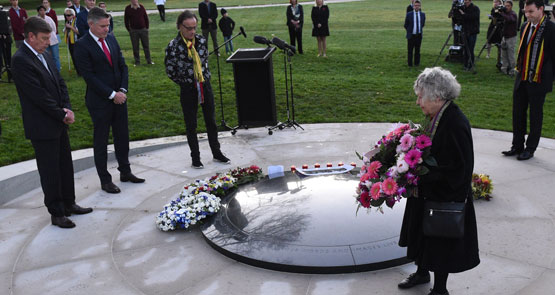 Forty years ago today, five journalists working for Australian TV stations — none older than 30 — were killed in cold blood in the early hours of the morning by covert Indonesian forces in Balibo, East Timor.

No one has ever been charged with the murders of Channel Seven journalists Greg Shackleton, Anthony Stewart and Gary Cunningham, or of Channel Nine’s Malcolm Rennie and Brian Peters. Australia has not pursued justice for them. This morning at the Australian War Memorial, their families and colleagues paid tribute to the men gone long before their time.

The murders of the Balibo Five, and two months later, of Roger East, a just-retired journalist who went to East Timor to investigate their disappearance, were a precursor to the slaughter that was perpetrated by the Indonesian army on the fledgling nation.

Demographers have estimated that over 200,000 people died in the Indonesian occupation of East Timor, with most of the deaths occurring before 1980. East Timor’s population before the invasion had been 649,000. The scale of death was extraordinary, but hidden. The Australian public, and the world, knew little about it.

“The Indonesians always had an eye [on] what Australia would say about the invasion,” says journalist Mark Davis, who has covered East Timor since 1998. “The fact that they could murder five of them and the Australian government said nothing … It gave the green light to murder.”

For the broader public, it took years before the truth of what happened in Balibo was known. In 1996, Tom Sherman, a former government solicitor, conducted an inquiry into the deaths that concluded the journalists had been killed in crossfire. The conclusion came under heavy criticism, partly due to its reliance on one witness, and also due to further uncovering of another witness, a commander of pro-Indonesian forces, who said there had been a plan by the Indonesian military to kill the journalists to keep the truth of Indonesia’s offensive quiet. Then-foreign minister Alexander Downer asked Sherman to mount a second inquiry in 1999, which he did, concluding, again, that the journalists had been killed in crossfire.

Then, in 2007, the NSW coroner conducted an inquiry into the death of Brian Peters, who had lived in Sydney. This was the first independent investigation into the murders that had the power to compel witnesses, within Australia at least. Deputy NSW coroner Dorelle Pinch called 66 witnesses to the events, including 12 East Timorese who had fought on the Indonesian side (many Indonesian military witnesses declined to come forward). Using legal advice from respected international jurist Ben Saul, she concluded a war crime had occurred, with the journalists killed in cold blood to prevent them airing reports of the Indonesian army’s actions in East Timor.

The political reaction was a milestone, though an ultimately hollow one. Kevin Rudd, then opposition leader, said: “I believe those responsible should be held to account.” But the government never formally accepted the findings of the report, as it had the earlier inquiries. An Australian Federal Police investigation into the war crime finding laid out in the coroner’s report commenced in 2008. But in October last year, almost 39 years to the day of the murders of the men, the investigation was dropped, over a jurisdictional concern. Because the territory on which the men had been killed was officially Portuguese, and the Portuguese army had been nowhere near Balibo, it was argued that a war crime couldn’t have occurred. The East Timorese resistance couldn’t be considered a proper army, and so one of the criteria of a war crime, it was argued, was not met. It’s now known the investigative team never had any contact with their counterparts in Indonesia, where the men accused of war crimes by the coroner’s report still hold positions of influence.

“They were finding a way out,” sayid UNSW professor and former Australian Army officer Clinton Fernandes. “The Australian Federal Police have a finely tuned political antennae. Let’s not pretend these guys don’t understand the political implications.”

Davis says he can’t for the life of him understand why the investigation was closed. “If anyone else is murdered, the investigation is not closed,” he said. He acknowledges the diplomatic difficulties of pursuing the arrests of figures like Yunus Yosfiah, an influential Indonesian political figure who was in command during the attack on Balibo, but says he doesn’t know why Australia is unilaterally making things so easy. “There should be an international warrant for their arrest. We might say we can’t march into Indonesia. But the process should be there that they’re wanted as prime suspects in the murder of five Australian citizens. That should be an active process.”

Shirley Shackleton, the widow of Greg Shackleton, says she never had high hopes for the AFP investigation. “They kept changing who was on it,” she told Crikey yesterday.”The main investigators would change every few months, and it was my job to talk to the new one, and they wouldn’t know what had been done by the old ones.

“I’m a practical optimist. I always have high hopes. But I don’t take anything for granted. And I knew it didn’t add up. So I was not at all surprised they stopped it.”

Asked what she’d like to happen now, Shackleton says it would be good to have a “proper inquiry into everything”. “A lot of the things that happened were reprehensible. And all kinds of evidence was shelved.”

She adds that she’s heartened by the 40th anniversary commemorations, which were organised, she notes, with little input from her. “What’s good for me now is I have all these wonderful people who are trying with me, like Senator Nick Xenophon, like Mark Davis, like Peter Cronau. A lot of people who are working from their own accord.”

“My husband was murdered. I don’t have a choice. It’s not just my right, it’s my duty.”

Shackleton has never received an apology, publicly or privately, from the Australian government for its role in what Xenophon and many others have described as the cover-up her husband’s murder. Neither have the other families. For years, others who have taken their side, even distinguished jurists like Saul, have been tarnished with the same brush — dismissed as political polemicists. And as things stand today, there is no ongoing investigation into what happened, either in East Timor, where the Indonesians murdered six Australian journalists in rapid succession, or in Australia, where the Whitlam government knew about it and did nothing.

Apart from Xenophon, who gave a speech in parliament this week to mark the 40th anniversary, no one in Parliament is pushing the issue, says Fernandes. “Many people are broadly sympathetic. But both sides of politics are compromised on it. No one wants to go back to Balibo.”

Perhaps the only bright spot is what’s happened to East Timor itself. The country is now independent — though still struggling with many things including press freedom — and memories of the Balibo Five are strong. Over the past few days, many East Timorese have marched from Dili to Balibo in their remembrance. The surviving families of the Balibo Five have played a big role over the years in nation-building. All are involved with Balibo House, the same house that Greg Shackleton painted with an Australian flag the night before his murder, which now operates a number of charities for the region, including a dentist and a pre-school.

Will the murderers ever be held to account? Shackleton is hopeful, but unsure. “I don’t know. But I think, just keep going.”

To paraphrase, “god said to Abraham, kill me five sons..” but, alas, no ram caught in the thicket.

On the question of important issues never revealed adequately, what about Crikey’s lack of interest in how to prevent the East Timorese being allowed to vote on their future when the Leftist Government in Portugal decided to give up Colonies,the Fretlin forces STARTED the military action which caused Indonesia to intervene?
When as a NSW Trainee Teacher in 1955 we were addressed by visiting Indonesian Educationists whom I condemned as apologists for Indonesia’s neo-colonial empire building, I was told by the Bureaucracy of the NSW LABOR State Government that my employment would be ended without any right of appeal. I ignored them on principle and survived. I’d suggest Crikey should consider Santayana’s warning about the Lessons of History.

AR, it’s little wonder successful students including ones at postgraduate honours levels used my help with their papers if the alternatives available to them were anything similar to what you deem relevant, is it.