Art Gallery of NSW hit by more redundancies. In August, Crikey reported that redundancies had hit the Art Gallery of New South Wales, with the media department folded into a communications unit. This followed news that the gallery was aiming to save around $800,000 from its budget through voluntary redundancies. The gallery seems to be moving ahead with this plan, with four staff made redundant on Wednesday morning, and more expected over the next couple of weeks. A tipster tells us that the gallery is attempting to reduce the number of staff by 20 in total.

The tipster questioned whether the executives should be taking a pay cut in the name of “savings targets”, instead of the staff.

“I wonder if the gallery or its trustees has thought of giving the director Michael Brand and his executive team of four a pay cut due to poor performance? Brand’s salary is close to $500,000 p.a. while combined with the executive team is in excess of $2,000,000 p.a.”

A spokesperson for the gallery said the redundancies remained voluntary, and insisted there was no target:

“The Gallery recently offered voluntary redundancies to staff, and the Gallery held a farewell breakfast yesterday for four staff who nominated themselves for a voluntary redundancy.  They all have been highly valued members of staff who have made significant contributions to the Gallery over many years.  They will be greatly missed by their Gallery colleagues and we wish them all the very best for their future.

“Voluntary redundancy is one of a range of options the Art Gallery of NSW is looking at to find efficiency savings.  These measures are not unique to the Art Gallery; other NSW Government agencies have also been tasked with the same efficiencies. The Gallery’s highly competent management team is currently exploring options to find these savings in line with existing Government policies and procedures. The rumour that there are redundancy ‘targets’ is incorrect.”

The gallery would not disclose the wages of the executives of the Art Gallery of NSW but said the detail could be found in the gallery’s annual report. This suggests that Brand’s salary is between $422,501 and $488,100. There are four executive members of staff, and three in the next highest wage bracket of $238,301 to $299,750 per year.

Waving flags. It became a running joke of the Abbott era that journalists could determine the “seriousness” of an announcement by the number of flags Abbott had in the background of his press briefing. Abbott was determined to lead a flag-based economic recovery. Leader of the opposition in the Senate Penny Wong asked the government to detail exactly how much had been spent in the last financial year on flags. In a response she received yesterday, the government revealed 936 flags had been purchased in the 2014-2015 financial year for a total of $109,058. Most of the flags were for the G20 Summit, or government visits.

Unsurprisingly, the most represented flag was the Australian flag at 171, but the government also purchased 110 Ukrainian flags, possibly to do with the Ukrainian government’s involvement with the MH17 investigation. Perhaps this is why Ukrainian President Petro Poroshenko has reportedly invited Abbott to go work in the Ukraine now that he has a bit more time on his hands?

The full breakdown is below: 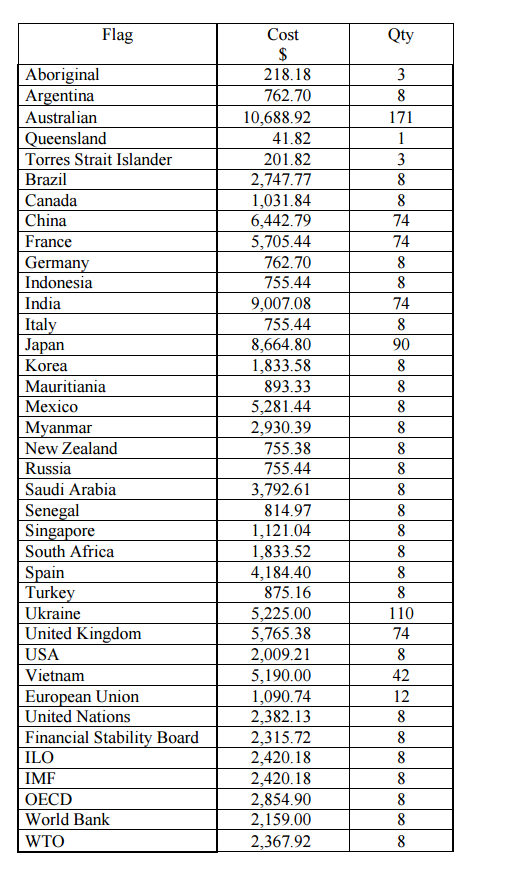 Since Turnbull became PM, there has been a significant downturn for the flag industry in Australia, with the PM opting  for just two flags at most of his prime ministerial announcements.

Morrison’s thin confusion. Treasurer Scott Morrison made an expedition into the world of high finance in question time yesterday when he argued that Labor’s proposals to address multinational tax avoidance via “thin capitalisation” would “be putting at risk serious infrastructure investment in this country, because you will be applying a higher interest cost than you otherwise would”.

Errrrrr … well, mate, actually the thin capitalisation proposal is designed to address the way multinationals charge local subsidiaries higher interest rates, or overgear them with parent company loans, with the interest charges flowing offshore and reducing the local company’s profits. Labor would curb the amount companies could claim as debt costs to the overall level applying across the entire company, not just the local arm, and have no impact on interest rates, except to remove a tax incentive for parent companies to overcharge subsidiaries for debt. Of course, if you regard tax as just another cost of doing business, well, companies would be paying more tax, and thus have a higher cost of doing business, but the rest of us might have a slightly different view of tax than that.

Hackathon for government hacks. Ms Tips reported earlier this week on some of the more interesting policy suggestions submitted as part of assistant minister for innovation Wyatt Roy’s policy hack event this weekend, and while the policy suggestion is a free-for-all with everyone able to submit their ideas, the hackathon itself is only open to 100 people, handpicked by the government. Some 40 of these are people from government departments. While it makes sense to have a few government officials there, filling up so many of the slots with people from the existing public service probably seems a bit counter-productive for all the agile, innovative, disruption that the government will be seeking to foster at the hackathon.

No Turnbull lifeline. Former Turnbull adviser Stephen Ellis has been fighting allegations he committed an act of indecency in Canberra airport on budget night in May. He resigned from Turnbull’s office as a senior policy adviser on the NBN after being charged with drug possession and committing an act of indecency in the presence of another person. A tipster tells us the Turnbulls are attempting to secure the best legal representation for Ellis, and want Ellis to return to work in the office of the now Prime Minister. But when asked whether this was the case, a spokesperson for the Prime Minister flatly denied the claim.

The battle to fight Swannie. While questions still remain over whether Wayne Swan will contest his seat at the next election (he insists he will, though others are angling for him to go), the Liberal-National preselection contest is already on. The four candidates to go up against the former treasurer are: Business consultant Felicity Evans, engineering consultant David Kingston, GRC institute non-executive director Lois McCowan and educator Bibe Roadley. The final candidate will be selected on November 1.

Turns out, they really can’t spell ‘Bendigo’. Last week, in response to an anti-Islam rally in Bendigo, Victorian Premier Daniel Andrews said that those protesting against a mosque in Bendigo “wouldn’t be able to spell Bendigo”. It turns out he was right. On its Facebook page, the fringe far-right extremist group United Patriot Front posted about going to the “Bendgio council meeting” held on Tuesday night. It somehow managed to misspell Bendigo not once, but twice. Some 13 hours later, and the misspellings have not yet been corrected.

Eight flags for Mauritania? Maybe its widespread use of slavery was the blueprint for proposed labour reform.

Indeed the bigots cannot spell. I have often baited them for this on their Facebook pages. Along with suggesting that they go back to their porches with their banjios.

Call me weird but I’m fascinated by the final 7 categories, who knew that boards & qangos had flags, averaging just over [email protected] for a total of $16,920.
What does the IMF flag look like, an iron heel crushing a human face for all Eternity… or is that the World bank?