ClubsNSW is suing the ABC over a claim Peter Garrett made. Plus other media tidbits of the day ...

A reshoot doesn’t halt a defamation case. The pokie wars look bound to erupt once again, as ClubsNSW announces its plans to sue the ABC for defamation over claims by former Labor MP Peter Garrett that he had been handed an envelope with cash — which he later said was a cheque — by a representative of the organisation at a campaign event in 2004.

The claim was made in Ka-Ching: Pokies Nation, a documentary to air on the ABC next Tuesday, and in his recently released book. When ABC reporters asked Garrett last week about a claim that he had been offered “hundreds, if not thousands of dollars” in an envelope, he said subsequent conversations had made him remember it was a cheque, not cash. He amended his story through a slip placed in his recently released book, and the ABC published a piece noting the changed details in his story.

But the changed story came under fire by ClubsNSW today, with the body’s CEO, Anthony Ball, taking aim at Garrett’s “appalling memory”. The body denies any envelope with any contribution was handed over at all.

“We considered the initiation of legal proceedings very carefully before coming to this decision, and only decided to proceed once the ABC refused to issue a retraction or apology,” Ball said. “The fact is that ClubsNSW did not make or offer to make a contribution to Mr Garrett or his electorate council. There was no cash, no cheque, no EFT transfer. Neither Mr Garrett nor the ABC have any evidence to the contrary because this alleged incident never happened.”

“ClubsNSW makes donations within the law and they are fully declared. Any suggestion to the contrary is defamatory.”

After Garrett changed his story on the envelope, the ABC reshot the interview with him. A new interview, with the claim of a cheque rather than cash, will be what goes to air on Tuesday. In the new version, Garrett says he was at an event that included “representatives of clubs and hotels”, during which one of them approached him. “I was handed over an envelope which I unthinkingly took, thought it might be literature or something like that. But it was a cheque. I gave it back.”

ClubsNSW doesn’t appear to be suing Garrett personally, though it says it is considering going after his publisher, Allen and Unwin. The organisation believes the slip correcting the story is “inadequate”. The ABC had no comment. — Myriam Robin

As Crikey noted yesterday, Mercer, who does media relations for the Nauruan government, deleted or made private much of his social media and online presences this week, after being condemned by journalists for distributing a police report that named an asylum seeker who said she had been raped.

But in a press statement released this morning, the government urged the Australian media to not refer to the 26-year-old Somali woman at the centre of the story as a rape victim, as a “the police investigation has shown there was no rape”.

Naruan Justice Minister David Adeang said his government had not named the woman in the release distributed by Mercer:

“It is a lie to say we ‘published’ the name. We did not even use her name in our statement. We simply sent a police report to a few media outlets who already knew who she was, in the interests of accountability.

“I haven’t seen her name published anywhere so this is just a smokescreen to protect the embarrassment of the ABC and the Guardian who ran the original story that has now turned out to be false.”

Adeang said the media should stop blaming others, “including the country’s Australian PR company who merely distributed the Government’s statement”.

In Australia, things keep getting worse for Mercer. Yesterday afternoon, the Public Relations Institute of Australia took the unusual step of issuing a statement condemning the release, saying it had been contacted by members over it and while the matter was currently under investigation by the relevant bodies, the PRIA felt the need to signal its ethical concerns about the release of this type of information by a public relations agent.

“PRIA strongly condemns the distribution and publication of any material that involves an invasion of privacy for any individual. The release of personal information that causes harm or distress to any person is strictly in breach of our Code of Ethics.”

The PRIA has been trying to be more involved in setting ethical standards in the rapidly expanding PR industry. It currently has 4000 members out of what’s estimated to be 30,000 PR practitioners in the country. But the institute itself notes that none of the parties involved are members of the PRIA and are thus not bound by its code of ethics. — Myriam Robin

Alternatives to paywalls. Andrew Holden’s recent announcement that more rental space would soon be opening up at Media House — sorry, his announcement that Fairfax took only $20 million a year by means of paywalling — shone a light on how ad hoc and desperate the whole paywall process has become. But a new standard seems to have been set by London’s Financial Times, which offers one-off story access in return for answering a survey question. Your correspondent got “how many children do you have?” and clicked on the response “I’d prefer not to say”. For which invaluable piece of data, he passed through the portal. What safe hands big media is in. — Guy Rundle

Front page of the day. Glow-in-the-dark ghost children! And for half the price of the Sun. Seems you get what you pay for … 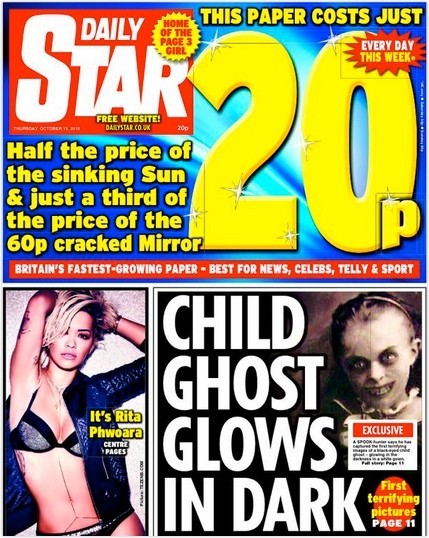 I wholeheartedly support this move by Clubs NSW to keep the topic of political donations from gambling establishments on the front pages.

On the flip-side, I suspect it’s going to be hard to report the news if they win.

Amateur-lawyer thoughts on their chances set aside for now.

Further proof, were it needed, that Garrett has the judgement & perspicacity of a dead tree – any glimmer of intelligence ringbarked by his born again xtianizm.