It's back to business for the government, with a big focus on terrorism.

Offshore detention and national security have been the top issues of the week, with PM Malcolm Turnbull and Immigration Minister Peter Dutton called on to ensure medical assistance is available to a woman reportedly raped by a Nauru guard, and Save the Children workers raided after rumours they had leaked information to media. Former PM Tony Abbott is still second in our top 20 as he sits on the backbench during Parliament’s sitting, next to Former Treasurer Joe Hockey — up six places this week into ninth — and following Turnbull’s praise of Abbott’s “generous and gallant” behaviour since losing the top job (what show was he watching?!). New South Wales Premier Mike Baird reportedly asked then-PM Abbott for key changes to anti-terrorism laws six weeks before the fatal Parramatta shooting but received no response, and has renewed his calls to PM Turnbull — as the Federal Government debates counter-terrorism measures — and added a request to reduce the age threshold for control orders against terrorism suspects from 16 to 14. Foreign Minister Julie Bishop says we “won’t be bullied” by Russia in our pursuit of justice for families of those aboard MH17, after a Dutch investigation confirmed a Russian-made missile downed the flight. All our metadata is reportedly being tracked and stored by telcos for two years, with Attorney-General George Brandis up 22 places this week into eighth, and the PM’s credibility on metadata taking a hit following revelations he is using a private email server and a transcript of his 2012 Deakin University lecture about why storing metadata is a terrible idea. Oopsie. It’s almost like we don’t even needto track metadata with everything so readily available online! And speaking of “readily available online”, Queensland Premier Annastacia Palaszczuk is up 16 places this week into tenth as MP Billy Gordon faces allegations from four women that he sent them “explicit” pictures of himself, weeks after being cleared of domestic violence charges due to insufficient evidence. 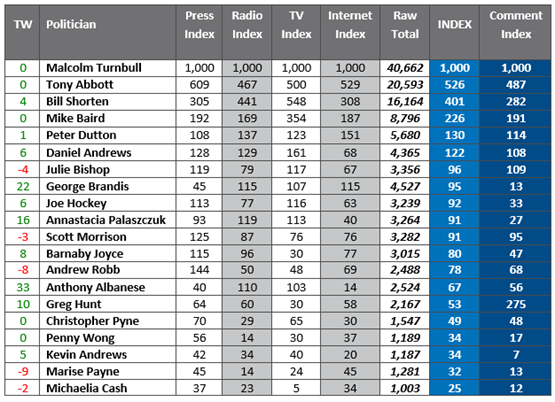 As Assistant Minister for Multicultural Affairs Concetta Fierravanti-Wells received plenty of mentions on talkback about offshore detention and terrorism, including caller Steve to Andrew Bolt and Steve Price’s night show on 2GB — who was “surprised” that she was allowed to speak on the show. Pot, meet kettle.

A magazine known for its nude centrefolds stopping them in favour of more profitable endeavours? I just don’t know what to think. (That’s a lie).