Further ructions in the Greens ... Brandis still does not understand metadata ... crowdsourced policy ...

Di Natale’s home state criticises Greens leader’s portfolio changes. Crikey has reported over the last month on the current turmoil in the Greens over the decision to take responsibility for the higher education portfolio away from NSW Greens Senator Lee Rhiannon. Most of the anger within the party has come, understandably, from the New South Wales branch of the party, but Greens leader Richard Di Natale is now facing pressure from his own state of Victoria to reverse the changes.

In a confidential motion passed by the Melbourne City branch of the Greens this week and leaked to Crikey, the branch:

2.    Expresses deep concern over the decision of the Federal Parliamentary Leader to remove the Higher Education portfolio from Senator Rhiannon, and the way the decision was made, noting that;

a.    The sole right of the Parliamentary Leader to allocate portfolios under the Party Room rules is inconsistent with the consensus decision-making model valued by the Greens;

b.    The protection of federal representation in New South Wales is a high priority;

c.     Senator Rhiannon’s work in the Higher Education portfolio has been prolific, prominent and of consistent high quality, and acknowledged as such by the National Tertiary Education Union, National Union of Students and others;

d.    Senator Rhiannon has been left with the smallest collection of portfolios of all the Federal Greens MPs in terms of prominence and importance (she is now the only Greens MP without a cabinet level portfolio), which carries serious policy and election campaigning implications;

e.    The portfolio reshuffle has resulted in approximately 70% of cabinet-level portfolios within the Greens being held by men;

f.      The portfolio reshuffle was announced during the change of Prime Minister on 15 September 2015 and did not include any generally distributed media statements describing the full reshuffle of portfolios as has been the case previously, and so invites the fair criticism that the announcement was intentionally secretive; and

g.    The change of portfolios was not communicated to party members;

3.    In the absence of an appropriate explanation being forthcoming, calls on the Party Room to reconsider the allocation of the higher education portfolio;

4.    Calls upon National Council to review the procedures by which the Party Room, the Parliamentary Leader’s office and the Leader are involved in allocating portfolios, inline with the Party’s decision-making principles;

5.    Requests the Branch Coordination Group to write to Senator Rhiannon thanking her for her exemplary work in the higher education portfolio to date and include in that correspondence a copy of this resolution, and also send a copy of that correspondence to the Federal Parliamentary Leader, the Federal Party Room convenor, the National Secretary and the State Secretary;

6.    That this resolution be considered confidential, but that it be communicated to the Party Room, National Secretary, State Secretary and State Council, and the Member for Melbourne.”

Metadata is the uhhh… read the legislation. As we have reported, today is the official start of mandatory data retention requirements for Australian telecommunications companies, and most say they are not ready to comply with the government’s new obligations. Attorney-General George Brandis has previously tangled himself up attempting to define the metadata needed to be stored in a Walkley Award-winning interview with Sky News’ David Speers. He’s not about to let himself get into the same mess again. When asked by Michael Brissenden on ABC’s AM program what data was required to be held, Brandis stuck to the script:

Brissenden: One of the problems seem to be what it is exactly they are supposed to keep.

Brandis: That is set out with particularity in the legislation.

Brissenden: What is it?

Brandis: What is required is that metadata, that is information about a communication as opposed to the content of the communication, be retained by industry participants. There is a detailed specification which is set out in the legislation.

The legislation, however, does not set out the exact types of data that telcos will be required to keep. It just sets out the more general sorts of data the companies should be keeping. Contrary to the government’s claim that it is only requiring telcos to store the data they already store, there are many types of new data that will need to be held under the scheme. The confusion lies in that many telcos have different types of data and despite going back and forth with the Attorney-General’s Department over the last six months, a majority of telcos still have no idea what data needs to be held. Not even Telstra, Australia’s largest telco, could meet the deadline. The company’s chair, Catherine Livingstone, told shareholders today that it had been approved by AGD for an extension of time to get ready.

Policy by crowdsourcing leads to interesting results. The new assistant minister for innovation, Wyatt Roy, is holding a “policy hack” whereby people can submit ideas for policies and the top voted policies will be considered at a policy “hackathon” in Sydney this weekend. The results so far are an interesting insight into what happens when you ask the public for policy ideas. Currently the top voted policy reads like something Ron Swanson might suggest in Parks & Recreation.

Some just seem to be rather personal policies.

And some are, well, ideas.

The many walks of John Howard. Former Prime Minister John Howard was well known for his love of walking, and today he gets his very own Walk of Wonder. Prime Minister Malcolm Turnbull today launched the walk at Questacon. According to the Questacon website, the Walks of Wonder is an app that people take on walks around Canberra to discover the hidden gems of the nation’s capital. The John Howard walk, pictured below, covers the parliamentary triangle, and takes around 45 minutes to an hour to complete. 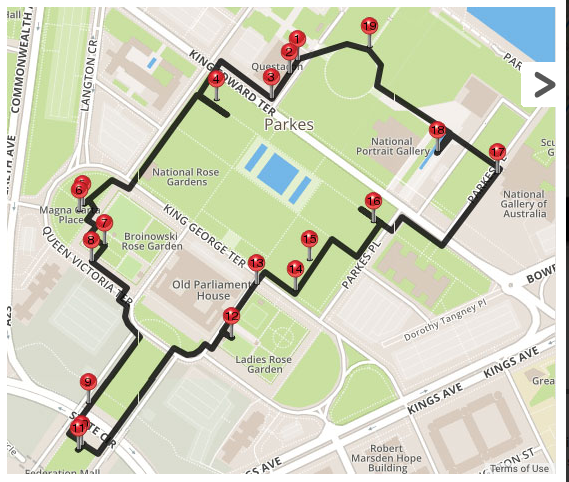 Where can I vote for “Wide Boy’s Thought Bubble-thon”?

Inner Melbourne has long dominated the world of the various “Green” collectives, so nothing is changing.

The legislation, however, does not set out the exact types of data that telcos will be required to keep.

The most obvious objective being that ISPs will just collect as much as they can to be on the safe side.

I heard Brandis on AM yesterday and I don’t think he understands technology issues at all. He has been juggling this hot potato for a ling time now, surely he should have paid someone to educate him about communication issues in 2015.
According to AM there is something called an app that one can buy for a dollar that somehow means the government cant get their hands on ones metadata. Whatever metadata is.

Ken, the simplest and cheapest solution is to run an off-shore VPN connection. Boom. This entire expensive data retention exercise has just been negated for a monthly fee of cheap-as-chips.