There's a very interesting, very last minute clarification in Peter Garrett's book, as those who attended its launch discovered. 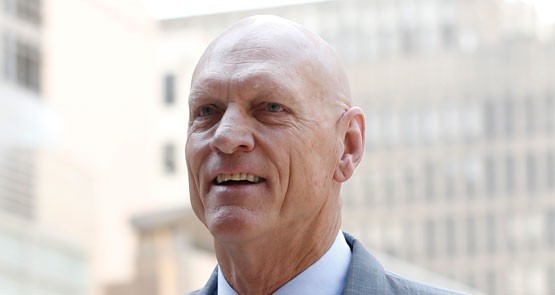 It was a brilliant idea of Peter Garrett to generate so much publicity for his autobiography, Big Blue Sky, by getting into separate fights with the pokie lobby and Kevin Rudd.

While no one was shocked to discover that the former PM is a megalomaniac and that pokie pushers love brown envelopes, it did make for a marvelous public spectacle. Like Garrett’s famously unco-ordinated dancing style, he’s been stepping around the allegation in the book that he had received an envelope full of cash from a representative from the clubs and hotels industry, and it has been great to watch.

He writes in the book about his time as a Labor candidate for the seat of Kingsford-Smith, in Sydney’s eastern suburbs. He says a representative from the pokies industry handed him an envelope of cash at a meet-the-candidates event (though when he realised what it was he gave it back).

He reiterated the story when being interviewed for a documentary about poker machines, Ka-ching; Pokie Nation, which is to be shown on ABC TV next Tuesday night. However, at some unspecified time between the filming of the interview for the documentary, the printing of the book and last week, something happened and Garrett changed his mind.

“On page 409 mention is made of an envelope of cash being handed to Peter Garrett … Peter Garrett wishes to make clear that the envelope in fact contained a cheque, made out in favour of his electorate council, and not cash. Then, as described on page 409, as soon as the author became aware of the contents of the envelope he gave it back.”

Funnily enough, it wasn’t mentioned at this morning’s launch party, which was attended by Garrett’s wife, Doris, and their three daughters, along with most of the members of Midnight Oil, author Thomas Keneally, lead singer of Cold Chisel Jimmy Barnes, author and activist Anne Summers, and former NSW opposition leader John Robertson. My true fangirl moment came, however, when I spotted Tim Freedman, the lead singer of the Whitlams, who wears his age lightly.

The book, coming in at a hefty 445 pages, chronicles Garrett’s extraordinary life. At just 62, he has been a musician, environmentalist, indigenous activist and politician.

Launcher Todd Sampson said it was a story of “love, hope and tragedy, eloquently written and clear, without pretence”.

In it, he “releases his frustration with constipation of government”. Although he is critical of politicians, the book shows that this is “just another chapter on this incredible journey — [it is a] beacon for many young people who want to make a difference.”

“You are left with a very special man, who not only cares but also does something about it.”

Protecting the orangutans: One last “me too”?

Perplexing indeed. Which prompts the question how many other errors are in the book?

Margot, in the unlikely event that Peter Garratt ever participates in a genuine debate, there’ll be far more embarrassing events from his book than these recent “oversights”.

Not reporting an envelope of cash to the police would be a crime I suppose. Whereas a cheque made out to his election campaign is OK. Might account for the change.

tonyl, I’ve worked with and for parliamentarians who weren’t as bright as Garratt but didn’t get similarly confused about what was happening with donations.
Q.E.D.

Having been a Midnight Oil gig attendee before they got famous and the crowd got big and ugly I strenuously disagree with your statement. Garrett was an awsome spectacle on stage. I’d describe his dancing style as energetic and aggressive. He was co-ordinated in a rather angry way.

Maybe this book would go a little way to make up for selling out and joining the Labor Party. Midnight Oil were uncompromising in their political beliefs. Too bad Garrett didn’t bring that same conviction into politics with him.