The NSW Young Liberals are attempting to discipline a member for speaking out on Facebook. 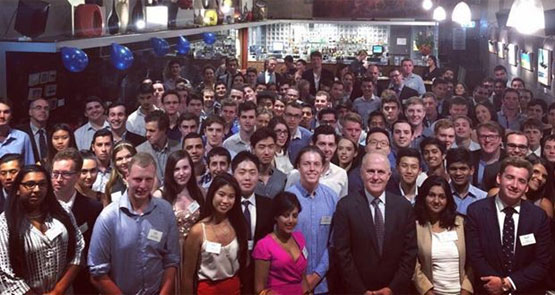 A motion to discipline a member of the New South Wales Young Liberals for disagreeing with Liberal policies on Facebook has blown open long-underlying resentments about the freedom of Liberal members in the state to speak openly about party policy and culture.

Crikey has spoken to numerous Young Liberal members in Sydney and elsewhere who have slammed the NSW division’s increasing control over the way its members interact on social media. Their resentment has most recently focused on a motion on the agenda for the next NSW Young Liberal Council, which calls on the Young Liberal executive to refer university student Kerrod Gream to the state executive for disciplinary action after comments he made on Facebook. Supporters of Gream have told Crikey his main crime was to robustly criticise the state government’s lock-out laws. The motion proposed puts things somewhat differently — it refers to his “online and personal abuse towards state and federal Liberal party parliamentarians” and criticisms of “the Liberal brand” and “internal party processes” as bringing the party into disrepute, thus putting him in contravention of the New South Wales media policy that covers party members.

Gream declined to comment to Crikey. It’s not clear who proposed the motion, which has no mover on the agenda paper. Our attempts to reach NSW Young Liberal president Alex Dore were unsuccessful.

But Crikey understands the motion has provoked a great deal of concern in Liberal circles in NSW and across the country. Member for Hornsby Matt Kean, one of the politicians Gream criticised on social media, is understood to have signalled his opposition to moves to discipline the Young Liberal. Other state Young Liberal bodies have also signalled their distaste for the motion, as has national Young Liberal president Simon Breheny.

“It’s antithetical to the Liberal Party,” said one NSW Young Liberal member who asked to remain anonymous. “Frankly it’s embarrassing,” said a Young Liberal from outside New South Wales. All those Crikey spoke to said the NSW Liberal Party had a tradition, now increasingly enforced for social media comments, of policing what members say in their personal capacity. It’s frequently used as a political tool — referring factional enemies for a slap-down from head office over policy disagreements is not something that would happen in other states, where media policies normally only police those who have explicit spokesperson roles within the Liberal Party.

It isn’t only Young Liberals who frequently fall foul of the media policies. Over the weekend, The Sydney Morning Herald reported that Patricia Shields, who was elected to the NSW Women’s Council last week, had resigned from both the Council and the party after Fairfax asked questions about anti-Muslim and far-right material on her Facebook page. After Fairfax started asking questions about Shields of Tony Nutt, the NSW Liberal Party state director (and Prime Minister Malcolm Turnbull’s “director of transition“), the outlet was told an hour later she’d resigned.

Meanwhile John Ruddick — a high-profile advocate of direct election of the federal Liberal leader by rank-and-file members, and candidate for the Liberal Party presidency in 2014, resigned from the party two weeks ago — after penning an opinion piece in The Guardian about the need for party reform.

One of those who has spoken most publicly in opposition to the motion proposed at the NSW Young Liberal council is Alex Butterworth, a former president of the Australian Liberal Students Federation and the Western Australian Young Liberals. Now living in New South Wales, he resigned from the NSW Liberal Division last August, after he received a reprimand from Nutt. The call was prompted by a piece Butterworth wrote on right-wing blog Menzies House about why Julie Bishop wouldn’t make a good prime minister (because she has no stated policy positions of her own, he argued).

Butterworth tells Crikey his conversation with Nutt went something like this: “[Nutt] said to me that he had the ability to suspend me. In this case he wasn’t going to as long as I gave an undertaking not to criticise any state or federal MPs on social media platforms while a member of the NSW division.” Butterworth wasn’t willing to agree to this, so he resigned his membership of the NSW division. He’s still a member of the WA division of the Liberal Party, which he says has far more palatable rules around free speech.

Now somewhat more free to speak out publicly than most, Butterworth wrote another post on Menzies House yesterday slamming the attempts to silence Gream:

“While other state and territory divisions of the party relish the challenge of policy debate, there is a chilling effect that occurs in New South Wales because of the media policy. The ‘tall poppies’ who express a view are torn down. Others don’t dare to say anything for fear of a similar fate. Those who fight the culture are sidelined and pushed out, no matter how distinguished their past service to the party has been.”

Speaking to Crikey, Butterworth said he had no issues with the Liberal Party aiming to keep those who represented it explicitly in line with the party line. But he said the media policy in New South Wales was being used against rank-and-file party members, preventing them from speaking in a personal capacity. Butterworth is a lawyer, and he says he can see situations where such a policy would prevent him or others from acting in a professional capacity in their representations of others. He also says the media policy is not applied uniformly. “Usually it comes down to your ability to pull strings behind the scenes.

“While I have a lot of friends in WA, I don’t have as many here in New South Wales. So the rules came down on me. And they’re coming down on Kerrod [Gream] because he’s a young, passionate person.”

“And there is a pattern of this. It’s not an isolated incident. And it’s not just grumpy young Libs — it has been happening for a long time across all members of the party, and different parts of the party, from moderate to conservative. And it’s really stifling healthy debate.”

The Newhouse resignation letter that won’t be buried

In the photo…count the number of female members who weren’t shunted to the front row to give the illusion of inclusion!

Naughty little men! How dare they be disloyal. Back to kinder with the lot of them.

What’s in the water in NSW? Labor, Liberal – same-same in so many ways. Oh, that’s right, no factions in the Libs (sound of Liberals laughing).

Wotta surprise – one major as open to dissent as tuther. Hooda thunk it!
When an organisation becomes so sclerotic that it no longer adapts it is a Dylan sang, “.. them not busy being born, is busy dying..”.
Not as if the Libs couldn’t have learned from the calcified & fossilised ALP.