Shed a tear for Andrew Bolt, who has lost his leader and gone completely to pieces. Crikey intern Sunny Liu and managing editor Cassidy Knowlton chronicle the long, sad spiral. 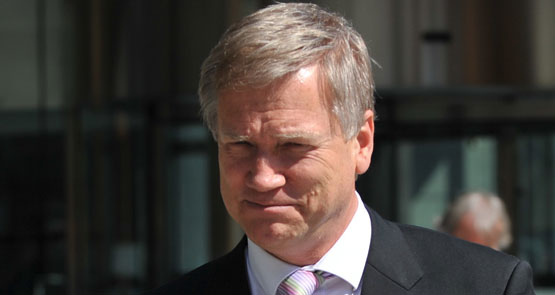 Poor Andrew Bolt. His man-crush Tony Abbott has been unceremoniously booted to the backbench, and climate change-believing, gay marriage-supporting Malcolm Turnbull has taken his place. For all his talk of “housetraining” Turnbull, Bolt’s clearly got a big bad case of the sads. He seems to be very publicly going through the five stages of grief, with all of his commentariat along for the ride.

Australia’s most-read (and probably most prolific) columnist had little to say about the biggest event in the Australian political year on September 14, saying only that Australia’s political system was “a madhouse”, and summing up the day’s events. His column on September 15 was a laundry list of Abbott’s “achievements” and why Turnbull wouldn’t be a patch on his hero. But the blog was eerily quiet on the day after the coup (Bolt claimed his son was having his tonsils out, which is remarkably terrible timing). It seemed as though he could not get his head around the idea that Abbott was gone.

By Thursday, September 17, Bolt had moved on to a much more familiar emotion for his audience — anger:

“Liberals [are] disgusted by the treachery and deceit that went into assassinating former leader Tony Abbott … Conservatives were always going to be furious about having their party stolen by the Left. But many are now appalled by the treachery as well.”

The following Monday, September 21, Bolt seemed to be coming round to the idea of a Turnbull prime ministership:

“He looks prime ministerial and sounds positive. He has an air of authority in economics that Abbott lacks, and an ease in front of the cameras. So I expect poll to favour him for a while, and I also expect him to win the next election, as I believe Abbott would have.”

He began to offer advice to the newly minted PM, a way that Bolt could accept that this terrible thing had happened:

“He must convince Liberals their party still represents them, too, and they have a stake in making him succeed.

“He must convince them he’s no longer the Turnbull who once donated $25,000 to Labor to defeat the young Howard government, or the Turnbull who, as head of the Australian Republican Movement, claimed prime minister John Howard ‘broke the nation’s heart’.

“He must persuade them he’s no longer the global warming crusader who as Opposition leader tried to force the Liberals to back Labor’s plan for a form of carbon tax.”

Ah, but the next stage was nigh upon him. By the next column, on September 24, Bolt had sunk into a depression (and there still seems to be a fair bit of anger in there):

“The media left is gloating. They’ve won and knuckle-dragging conservatives like me and Alan Jones have lost. Our man, Tony Abbott, is gone as prime minister. Their man, Malcolm Turnbull, rules.”

“So boo hoo hoo, we cry. We helped get Abbott elected, but couldn’t save him. But at the ABC it’s party, party. Abbott used to be treated like filth there, but it’s all hugs and kisses now for Turnbull, the ABC’s favourite Liberal.”

And this depression looks like it’s settling in for a long spell. In his September 28 column he was drowning in sadness:

“Now that Tony Abbott is gone I can finally tell the truth about him. Folks, you made a big mistake with this bloke. No, no. The mistake wasn’t that you voted for him. In fact, you got one of the finest human beings to be Prime Minister.”

“So you’ll call me biased. You’ll laugh that I can write this massive praise of him when almost everyone else is horse-laughing. And you’ll say that’s why I see more qualities in Abbott than are actually there.”

“Yes, I know Abbott made mistakes, and I was hard on the worst. I know he was too stubborn. And I know he was clumsy in selling himself … That’s why I say: this country has despised and rejected a great servant.”

Yesterday’s column was an ocean of depressed navel-gazing (he used no fewer than 37 first-person pronouns), so it does not look like he’s going to find his way out of the mire of grief for his fallen leader anytime soon. Despite exhortations from readers (one from “Johnno”: “Get over the loss of Tony [Abbott] and embrace Turnbull”), Bolt just can’t find his way to that fifth and final stage of grief, acceptance:

“What exactly do my critics want me to support? Should I have cheered Turnbull’s ludicrous talkfest … How could I cheer that, when I’d mocked Kevin Rudd’s own summit? Or should I have hallelujahed when Turnbull promised to do lots of ‘explaining’ … I’d have been a hypocrite … Should I have perhaps said how wonderful Turnbull was to put a million options back on the table … Haven’t I argued for years that the Government under both Labors and the Liberals had a spending problem.”

It’s OK, Andrew. We’ll get through this together.

Sounds like the sort of grief process Edgar Bergen would have gone through when his Charlie McCarthy was attacked by termites?

[It’s OK, Andrew. We’ll get through this together.]
Dear Cassidy and Sunny, your task, should you choose to accept it, is to lead Andrew *deeper* into the woods.

It makes preferring Turnbull over Abbott so much easier knowing that Blot is firmly in the latter’s corner.

Without wanting to enumerate the number of obfuscation methods employed by Crikey in its politically-prejudiced campaigns, I suspect that number would exceed the 5 stages you assert for Andrew Bolt.

This cries out for one of those lovely German words that does what English cannot.

Schadenfreude (/i>. Too predictable?

Or Schlimmbesserung – Bolt trying to make things butternut actually making them worse. That one works for me ..