Liberal Women’s Fight Club heats up. According to Prime Minister Malcolm Turnbull, there are no factions in the Liberal Party, but last month a tipster told us that there was a civil war between the moderate and conservative not-at-all-factions over the position of NSW Liberal Women’s Council president. That battle was ultimately won by Robertson MP staffer Chantelle Fornari-Orsmond, but it appears that one elected member of the executive council has already resigned just days after the election was over.

Yesterday it was reported that Patricia Shields, just shortly after being elected to the executive committee, has resigned. In a week where Turnbull called for mutual respect in multicultural Australia, Shields resigned after Fairfax asked questions about anti-Muslim and far-right posts on her Facebook page from groups such as Australians United Against Sharia Law, Reclaim Australia and Britain First. Shields had won the position of country vice-president last week. Know more? Let us know. And you can stay anonymous.

Send ’em to Davy Jones’ Locker. Last week we reported on the potential mutiny on the Royal Caribbean’s Legend of the High Seas trip after there was a last-minute change of itinerary to account for bad weather in Broome. This meant the ship was diverted to  the less glamorous Port Hedland. At the time the company claimed that guests has been informed by letter before they boarded the ship, and they were offered refunds for short excursions and port fees. But one tipster told us he received no such email prior to departure in Fremantle, and another said all refunds needed to be taken to the head office of Royal Caribbean:

“When we held a meeting to complain about the Broome cancellation we were assured by the ship’s staff that at the very least our port charges for Broome would be refunded. Upon settling accounts passengers (including me) we surprised to see no refund. We were told that the ship had no authority to refund the charge and we should take it up with had office.”

A spokesperson for Royal Carribean had not responded by deadline.

Too sexy for the internet. Last week, Ms Tips reported that the eSafety Commissioner ordered a number of Western Australian adult shops to pull down listings of DVDs from their websites, even though the DVDs were not refused classification and are allowed to be sold in Australia. It wasn’t clear at the time why the eSafety Commissioner was targeting legal content on adult sites in Australia, but after speaking to Communications Minister Mitch Fifield’s office on Friday, we were told that the interim take-down notices were issued while the sites ensured that the title listings were put behind an age verification page:

“Where content is likely to be classified by the Classification Board as X18+ (explicit sexual activity) or Refused Classification (for example, child sexual abuse material) it will be potentially prohibited – whether subject to a restricted access system or not. The office has recently investigated a number of complaints about pages advertising adult DVDs. The advertisements were accompanied by images likely to be classified R18+ (and not subject to a restricted access system) and X18+. The office issued the relevant content services with interim take-down notices. The content services responded promptly to the notices, ensuring that the material was either taken down or brought into line with Australian classification standards.”

Sunbeam redundancies? A tipster informs us that Sunbeam’s Botany factory in Sydney has made a number of forced redundancies in the last week. No word on the number of jobs or the areas of Sunbeam affected. We asked Sunbeam for comment, but the company had not responded by deadline.

Dangerous content ahead. Twitter this morning seems to be declaring all links to The Australian are “potentially harmful”. Users clicking on links to The Australian are being warned that the site could contain malicious software, or attempt to steal your password, or personal information, or take your information for spam purposes. Ms Tips always suspected too much Oz might be dangerous …

This isn’t a sudden new compliance with the eSafety Commissioner’s content guidelines for social media, alas, but usually something to do with a rogue advertisement in a news website’s page being potentially dodgy. Sharri Markson said this morning that The Australian was having a word to Twitter about it this morning. 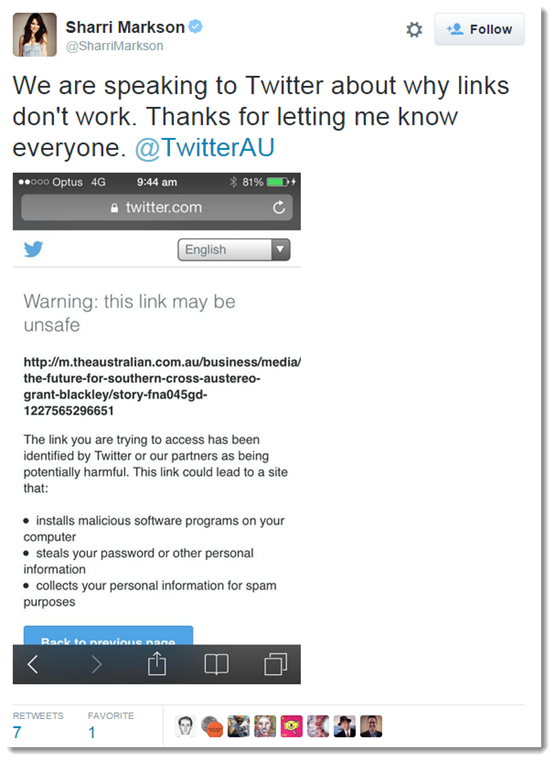 Tony Abbott dot com. Before the 2013 election, Tony Abbott, like many MPs, had his own personal website. Tonyabbott.com.au was the home for all press releases, announcements and local Warringah news right up until the election. Shortly after the election, Abbott’s website was scrubbed and redirected to liberal.org.au. Some had suggested the scrub was a recent thing, but looking through the archives shows that Abbott relinquished his control of the website to the party shortly after becoming prime minister.

Inquiring minds are wondering now that Abbott is no longer PM, will he get his own website back, if, as he insists, he still has a lot to contribute to public life? Especially given the new prime minister still has his own personal website, not to mention his own personal email server he uses to send ministerial emails … but oops, sorry, that’s not a three-day story, according to his office.

The backbench bandits. Speaking of the recently deposed prime minister, Abbott is expected to make his return to Parliament today to sit in question time for the first time since he lost the leadership almost one month ago. Abbott was originally seated next to Liberal MP Andrew Laming right up the back, but after the swearing-in of the new ministry, a new seating plan out today reveals Abbott has a new spot. Abbott is now flanked by other victims of the leadership change, former treasurer Joe Hockey and the not-at-all-bitter Kevin Andrews, halfway up the back bench.

Shed a tear for the end of the glorious “wolf pack” on the backbench that was Liberal MPs Ewen Jones, Wyatt Roy and Dan Tehan. The trio were often seen mucking around in the back row during question time, but sadly now they are separated as Roy is part of the ministry and Jones is a government whip. In a seating arrangement that won’t at all confuse anyone, Wyatt Roy is now seated to Ken Wyatt.

Laming triples down on teacher controversy

Now there’s an image – “Abbott, Andrews and Hockey stuck halfway up your back bench”?

At least Leventy is spitting his overcompensated dummy but imagine the other two formenting retribution – the O/T is full of such stuff – so it is a pity that Borey Carnadi is in ‘another place’. What an unholy trinity they’d make.
BTW, Blot thinks that it is shameful that his hero should even be exposed to the humiliation of having to appear in the rear stalls.
Schadenfreude,the gift that keeps on giving.