Rundle: doctors rise up against Australia’s regime of torture

Australia's treatment of asylum seekers has a reached a point at which it is so crisis-ridden that its moral suasion has started to fail. 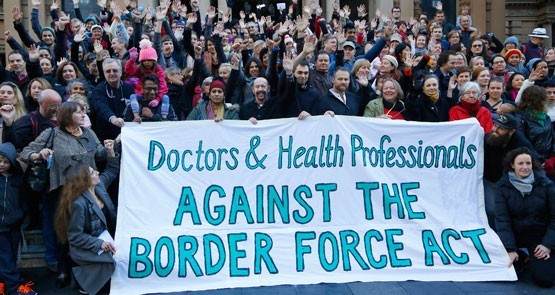 Will the refusal of doctors, nurses and other staff to return sick children to detention camps (even the “open” one of Nauru) mark the start of a new stage in Australia’s treatment of refugees? It is years since anything so categorical and assertive has happened — not due to the lack of energy and persistence on the part of activists, but simply because there was nothing new left to do. Protests, sit-ins, marches, letters to editors and on and on, they have maintained the moral and political objection to policies and practices, in a situation that stalemated long ago.

The refugee disaster is most likely not the hot-button one it was some time ago, but the public opinion remains stalemated where it has been for years: around 65% to 35% in favour of a harsh regime. By one measure this has been locked in place for 17 years now. By another, for nearly a quarter of a century, since the system was instituted in the face of Cambodian refugee arrivals. The first high-profile protest was David Kang’s mock-assassination attack on Prince Charles with a starter pistol in 1994. Kang thought he would be killed by security, and that that would give the issue global attention. The event seems as distant as the end of World War II.

Nothing since the break-out at Woomera in 2002 has been as inspiring as the medical refusal and the photo of resisting staff, their fists raised en masse. This next stage could only have come from within the system itself, the machine that reproduces a process to which many people give silent, and far from ardent, consent. The “outside” of the system now has very little possibility of altering its process. Meanwhile, the “inside” of the system is becoming crisis-ridden by the contradictions of the system itself.

This would appear to be a result of the way it has been set up and justified. The moral justification for what has been a virtually continuous system, from a sort of “xenophobia-first” model — in which the humanity of refugees could be disregarded — to one based on a universalist morality: that the thousand or so drownings during crossings made it morally incumbent on us to use immoral methods to minimise or prevent them.

It’s been little observed what an enormous switch that was — from a communalist “ethic” of national borders to an obligation to persons unknown, all in the service of an absolutely unchanged practice. Most of the people who switched enthusiastically behind it had no real belief in it at all, of course — they simply realised that the xenophobic response was less salable than it had been, and the universalist response reversed the moral demands onto those opposing the policy. That was effective, because the moral conundrum was genuine. Absent of some pie-in-the-sky policy — sending regular ferries to pick up would-be refugees was one desperate suggestion — the rise in drownings did make it arguable that some sort of deterrent policy could be considered.

The challenge to this, as your correspondent noted at the time, was the “switching problem” — the question of what happens when person X takes on evil action as a means to prevent a greater evil occurring by other hands. Taking the relatively “consequentialist” side — where one would be pretty willing to do evil things to prevent greater evil — throws up various problems. It abolishes the difference between action and circumstance, thus removing the brake of personal responsibility and consent. It makes one person’s ends — the person in an island prison camp — the means by which another person’s ends — the person who might otherwise drown at sea — are measured. Thus making a real person’s suffering the tool by which a potential person’s greater suffering is avoided.

Putting that sort of disjunctive morality at the heart of an institutional system rapidly removes any brakes to action. Harshness, cruelty, sadism become part of the means of deterrence. The policy encourages the worst aspects of individual humans in power — a pleasure in power over others — and of institutional structure, i.e. the indifference to the humanity of the others under its care.

This is exactly what has occurred under the current system. The purported universalism justifying the system — we are stopping the boats on behalf of people who might drown in them — has licensed the creation of two island prison camps, which are simply laboratories of cruelty, neglect, torture, sexual assault, psychological torment and despair. The policy has created, stabilised and finessed a system in which suffering is finely calibrated and assessed not from its moral aspects, but for its strategic value, and its cost-benefit analysis. It will leave permanent deep marks, physical and social, on thousands of people, particularly children, it corrupts the people who enforce it at the front line, the public servants who administer it, and it has more or less destroyed parliamentary rule of law in a whole nation, Nauru, using its dependence to empower a group who have staged a series of mini coups, to create a sham-democracy.

Proponents of this as a deterrent system will point to the absence of drownings. But at some point, the horror of sustained abuse, soul murder and despair have to be taken seriously. Many refugees themselves say they would prefer the risk of death to the torture of incarceration. Indeed the very act of making such journeys is often a preference of life-risk over a non-life — and we are now well aware of the paradox: no regime of detention that would be morally acceptable would have the slightest deterrent effect. Any “harsh” regime will become a sadistic one by a process of escalation. We have become a nation authorising not merely torture, but experimentation with its range, effect and measurement. Eventually, it’ll be a key-export service — nations building their own such camps will seek out Australians for lucrative consultations in how to do it. Yay for us.

But you can only push such cruelty and indifference so far — if it has been underpinned by a claim to be done on behalf of the people you’re abusing (or people like them, or in their same circumstance). At some point it simply produces a rupture at the point where the contradictions are highest. That has occurred where ‘refugee-boat’ ethics meets another, and genuine, humanist ethic, that of the Hippocratic Oath. This general oath — “first, do no harm” — setting out the precondition of the oath-giver exercising their role, has finally done its work. It is occurring in the same way that a refusal of medical co-operation with capital punishment in the US has dealt a huge blow to that institution — a blow, once again, that couldn’t come from the outside. It suggests that at some point, what is crucial to such campaigns is an act of internal interruption. Once the smooth reproduction of the system cannot occur, its moral suasion starts to fail.

The question now is whether this can be sustained — and whether it can be extended. The entire system — its daily process, its moral license, its justification — is as crisis-ridden as it has ever been. Now it needs public servants to refuse to administer it, unions to refuse to supply Transfield, and other connection points. But it also needs a public, viable and alternative plan to reduce the risk of drownings should the boats restart again. I very much doubt this mass medical refusal is a sudden spontaneous act, and I would be surprised if there had not been the presence of refugee activists in the midst. But that’s of historical interest merely. Someone’s thrown a wrench into the gears, now is the time to pull the machine apart.

Why is the starting presumption that we (Australia) are responsible for people who drown at sea trying to come here? We didn’t invite them and they choose to get on the boats.

The choice here is simple, we do or do not do evil. We should no be running prison rape camps because it is not our responsibility that others take these life risks.

Good piece today Guy.
The medical profession’s stand on this issue, has final given me some sort of hope that a circuit breaker might be possible.

It does seem like a first tentative act of civil disobedience but that is a start. Whether or not there’s some sort of subsequent groundswell among the Australian public and corporate world seems very doubtful to me given the 65%/35% support for incarceration. I’m afraid I don’t think there’s the moral value or the conscience left in enough Australians these days, too busy worrying about capital city real estate and new Italian sofas or a new smartphone. The people who do care are passionate but the rest vote for people like the current bunch of politicians. Tell me I’m wrong?

Dutton, the Limited News Party and their “Hypocritic Oath”?

Another piece, Guy, harking back to an emotively-inspired rally which added little to actual analysis of the situation, did it.
At least you haven’t made absurd suggestions that it was “a first tentative act of civil disobedience.”