David Speers and Emma Alberici explain the delicate balance between being a breaking new journo and being a hard-hitting interviewer. Plus other media tidbits of the day.

It’s complicated. It can be tricky trying to break news and hold politicians to account through robust interviews, Sky News’ David Speers told a panel at the New News conference on Saturday.

He’s both Sky News’ political editor and the host of PM Agenda, where he frequently interviews politicians. “A lot of my sources are people are I interview,” he said. “So you don’t want to burn them, but you also can’t treat them with kid gloves.”

Questioned by former ABC journalist Ramona Koval on whether this was appropriate, he said it was inevitable — it was “where the media’s gone”.

“I’m in the same situation,” piped in fellow panelist Emma Alberici, from Lateline. “Well maybe you shouldn’t be,” Koval retorted.

But there’s no way around it, Alberici explained, saying that the information some sources gave her helped her to interview others more effectively. Questioned by Koval about why Speers and Alberici didn’t share their sources with others in the nwesroom, freeing them up to focus on either breaking stories using confidential sources or conducting forensic, open interviews, Speers said it was an “interesting point, but that’s not how it works”. “Journalists don’t share,” Alberici said. “Because of individual pride. We guard our own contacts.”

Both political journalists nominated the intense time pressure they are under when preparing for interviews as one of their biggest challenges. Politicians are usually only locked in a few hours ahead of time. Speers’ Walkley-winning George Brandis “what is metadata” interview was locked in only 30 minutes in advance, he said. Being able to do live interviews with relatively little notice comes down to “day-to-day consumption” of news across a wide range of policy areas. “With live interviews, you’re so exposed to not knowing everything about a story,” Alberici said. — Myriam Robin

Is Guardian Australia making money? It is, editor-in-chief Emily Wilson assured an audience in Melbourne. “We make money. But we also spend money,” she said.

The Guardian globally has access to the Scott Trust, a massive money-pile that allows The Guardian to make small losses that can be covered by the interest earned by the trust. But The Guardian Australia doesn’t have access to this pool, Wilson says. “We hope to become self-sustaining here by year five or six,” she said.

The Guardian Australia now employs 42 journalists, but Wilson says it still doesn’t have enough reporters to do what it needs to do. “We’re missing an Indonesia reporter. Someone in New Zealand. We need more people in China and more in Hong Kong.” The local site covers much of Asia for The Guardian globally, given its more convenient time zone.

Locally, she’d like more reporters covering Australian news, too. “All our reporters are juggling breaking news with investigations.” But any expansion would depend on revenue growth to fund it. — Myriam Robin

ABC does original content, says ABC boss. The ABC news division is often criticised by rival media organisations for spending too much time following up or repackaging stories done by others and too little time breaking its own. But that’s not the case, ABC managing director Mark Scott preached to a Melbourne audience (forgive us — he was standing on a literal pulpit) last week.

Aunty recently commissioned a review of its news services, which counted the number of reports that were either broken by the ABC or had “significant new information and fresh angles by our journalists”. Scott said on that metric, the review had found 21% of 7pm TV news bulletins fit the bill. In radio news, it was 20% of stories. And in online news, it was 39%.

The flagship daily current affairs programs scored far higher on the metric — 76% of 7.30 stories were “distinctive content”, along with 92% of radio current affairs stories. — Myriam Robin

Me, myself and I. Andrew Bolt says he won’t support Turnbull. He just won’t, won’t, won’t (italics ours).

“Still, I won’t pretend I don’t have plenty of critics, and to them I have two questions.

The first is: Do you really want me to publicly support Turnbull? Call me a megalomaniac — plenty do — but whenever I defended Abbott, I got the distinct feeling the Left in the media thought it should go even harder against him. If the most evil man in Australian journalism said something was good, odds were, it was bad.

And if I then kicked journalists for making false claims about Abbott’s fabled homophobia, misogyny, thuggery or sponsoring of a possible war criminal, it was as if those journalists tried even harder to prove Abbott was all they had said.

So I’m guessing that the more I criticise Turnbull, the more such journalists will defend him. This means I’m actually helping Turnbull, right? So stop whinging. Well, that’s my excuse.”

It keeps going. We counted 33 personal pronouns. This from the man who says he’s “housetrained” Turnbull. — Myriam Robin

Netflix price hike. Streaming video frontrunner Netflix reports its third-quarter results Wednesday morning, Sydney time, but already we have a flavour of what will be in the report — the company wants to make more money from its millions of customers in the United States, Australia and the rest of the world. Late last week the company revealed it was hiking the cost of its standard subscription by US$1, to US$9.99 a month. The pricing will apply to new subscribers in the US, Canada and some Latin American countries. The change is only for Netflix’s “standard” service, where two consumers can stream HD programming on two screens at once. The move does not affect Netflix’s “basic” service, which costs US$7.99 a month for standard definition on one screen. It also does not affect Nielsen’s “premium” service, which costs $US11.99 for HD to four screens, and the Ultra HD when it becomes available shortly. Netflix has 69 million global and 42 million US consumers. There is no breakdown of the number of subscribers in the differing offer classes. Netflix said the price rise was needed to finance the extra content it is producing (and buying in) for the streaming service. Another price rise is probably going to happen next May, when many subscribers who have got two years of “grandfathering” on price rises lose that protection. – Glenn Dyer

Front page of the day. Turkey confronts a tragedy. 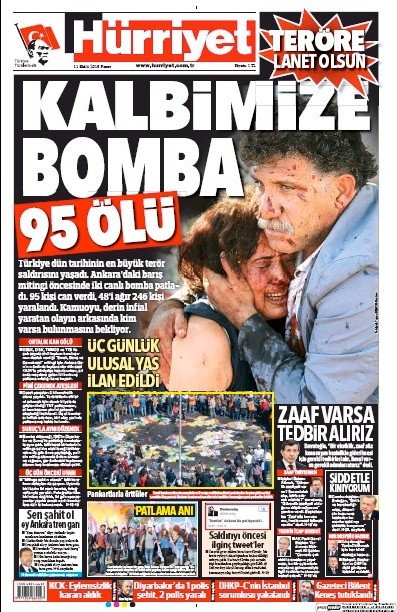 Alberici’s admissions? Now there’s a “surprise” of the bleeding obvious?

Blot still refers to “journalists” as if he isn’t one – paid as he is (presumably) to contribute to Murdoch’s excuses for journals on a regular basis?