Pyne and Albo on Kitchen Cabinet. There’s less than a month until the next season of Annabel Crabb’s Kitchen Cabinet is back on the ABC, and judging by the ads that have appeared already it looks to be a cracker — Scott Morrison cooking Sri Lankan fish curry, tyres squealing with Ricky Muir — and this intriguing note that popular Canberra restaurant China Plate would be closed for filming. 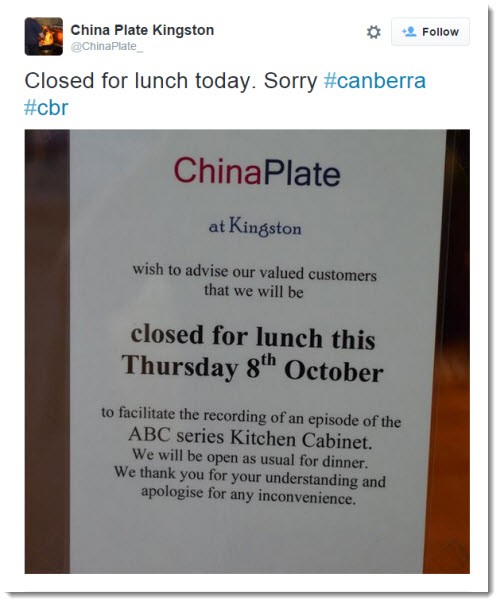 Who is the lazy pollie who isn’t cooking for Crabb, we asked in the Crikey bunker — even Joe Hockey managed to put some snags on the barbie! Turns out it’s not just one MP who shirked their cooking duties, but two. Crabb will be dining with regular sparring partners and friends Christopher Pyne and Anthony Albanese this afternoon. It’s not the first time Pyne has appeared on the program — he was in the very first episode of season one, back in 2012. He teamed up with his mentor Amanda Vanstone in that episode, and Pyne seems a clever host. Two appearances without cooking once!

Speersy’s first love. Year 12s around the country are counting down the days until their final exams, and youth charity ReachOut has again made a series of videos of prominent Australians talking about their experiences in their final year of school and assuring stressed-out teens that there is life after year 12, no matter what results come from exams. This year features a number of politicians and journalists who talk about the political climate, what music they were listening to and how they studied. Independent MP Cathy McGowan says her favourite subject was history and reveals she failed her first year of university. Sky News political editor David Speers says he was very into jazz and admits that he was distracted by music, falling in love for the first time and going on a band tour overseas. 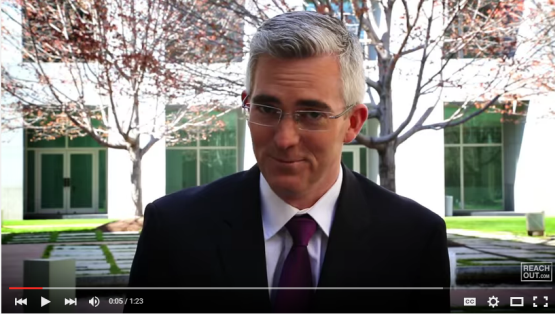 What a talented man! Kelly O’Dwyer reveals she was an Abba fan as a teenager and she avoided physical education as a subject. Ken Wyatt says his favourite subject moved from maths to literature in year 12. Bob Katter says he sat his exams in 1962 under the shadow of the Cold War. “It was on, nuclear holocaust time. We’re all looking at each other, white faced with fear.” And that fear had nothing to do with English essays!

Anyone seen Jeff? While notices of businesses going into receivership are not usually moments of celebration, we can’t help but be intrigued by this in today’s AFR, advertising “20 animatronic dinosaur units”. “Specially designed, museum quality exhibits, previously displayed in major exhibitions by museums in Western Australia and most recently in Queensland,” reads the advertisement. The description sounds eerily similar to Clive Palmer’s dinosaurs, which filled the Palmer Coolum Resort, or Palmersaurus, as it came to be known. Palmersaurus closed down earlier this year after it failed to draw crowds — are these dinosaurs victims of the collapse? We made multiple calls to the receivers this morning to find out about the dinosaurs’ recent history, but didn’t hear back by deadline. 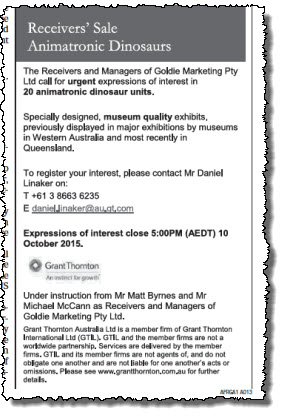 Mutiny on the high seas? Luxury cruise ships are not the type of place one would generally expect a mutiny, but a Crikey tipster tells us that a brigade of grey nomads aboard the Royal Caribbean’s Legend of the Sea have been talking about staging a coup over a change in the ship’s itinerary. The ship, which left Fremantle last weekend, was due to stop at Broome as part of the two-week journey to Singapore, but customers were told it would be stopping at Port Hedland instead after they had gone through Immigration and were boarding the ship. The crew told passengers they couldn’t stop at Broome because of the tide, but the passengers thought they weren’t given enough notice of the change of plans, lobbying the captain for answers:

“So the issue appears to be that RC could of advised passengers nearly a week out but chose not to. Many (like myself) were planning to catch up with friend and relatives in Broome who had taken time off to meet the ship. One lady who was to board in Broome was told to buy a ticket to Port Hedland and claim it on her insurance.

Port Hedland was a poor substitute with the tour highlight a trip by bus to the local Woolworths.

By about the second week of the cruise the anger started to seethe with a passenger committee being formed by a retired Ansett Captain and some very capable fellow passengers. A letter was drafted and signed by nearly 400 passengers and sent to both the Captain of the Legend of the Seas and the CEO of the company. The management on the ship seemed to go out of their way to shut down dissidents by not allowing suitable meeting rooms and pulling down notices of meeting that appeared on the ship’s notice boards. That being said getting 400 people to sign a letter by word of mouth was not a bad effort. The management of RC were asked to formally respond Tuesday 6/10.

This afternoon in a very ‘cozy’ meeting room several hundred passengers took turns to hear the response from Royal Caribbean (Photo’s attached) RC sent no staff to address the crowd nor did they send an official written response. Instead the Captain has passed along a message stating that the letter from the 400 passengers would be effectively ignored and if passengers still wanted answers or recompense they should contact the company on an individual basis.

… With four days left to Singapore don’t be surprised if the Captain is made to walk the plank.”

We asked the Royal Caribbean why it took so long to alert passengers of the change of itinerary but did not hear back by deadline.

Update: Royal Caribbean got back to us with a statement confirming that the ship didn’t dock in Broome, saying that safety was their priority:

“Legend of the Seas was unable to call at Broome on 1 October 2015 during her 14-night Fremantle to Singapore cruise due to extreme tidal conditions. Working closely with Broome Port Authority, we were unable to determine a safe gangway solution to bring guests ashore.

Tidal conditions would have resulted in access doors to the ship being below wharf height for seven hours during our time in port, preventing gangways from being able to be safely connected between ship and shore, inhibiting evacuation of the ship in the event of an emergency.

Safety and security of our guests and crew are our number one priorities, and after careful consideration, a decision was taken by the ship’s Captain before the cruise departed to cancel the scheduled call at Broome and substitute with Port Hedland, where we were able to dock alongside. Guests were provided with a letter advising of the itinerary change immediately prior to boarding the ship.

We do our best to minimise itinerary changes to avoid disappointing guests who may be looking forward to visiting particular destinations, however safety always remains our highest priority and itinerary changes occur from time to time if sea conditions and available port infrastructure compromise our operations. Guests will be refunded all prepaid shore excursions and port fees for the missed port.”

Tips and rumours: mutiny on the high seas

“Kitchen Cabinet”? Another half hour to wash my hair.

Thanks for that suggestion, klewie.

Pyne may be reluctant to dish up but is ever eager to dish it out.

Surely the cruise company has defaulted on the contract? I hope the passengers sue for breach of contract.

Pyne must be in trouble in Sturt – getting another Crabb make-over?
After watching them carry on in public – such tongue baths are best left in private.

I received an email from Royal Carribean this week with four pages of cruises available. Crikey some of them are cheap at just over a hundred dollars a day, especially the SE Asian cruises.
I wouldn’t be whingeing too much about missing Broome, is about as exciting as Townsville.