Business conference decides interviews come with some strings attached. Plus other media tidbits of the day.

SydStart’s been around for five years but was purchased late last year by juggernaut startup Freelancer. Under new management, it boasts high-profile hacktivist Kim Dotcom as a speaker. But when The Australian/Technology Spectator journo David Swan tried to set up an interview, he was told in an email:

“If you would like to go ahead with this, simply provide me with the link to your pre-event coverage once it is live and I will then give you the details for the VIP pass and confirm your interview with the speaker of your choice (however we cannot guarantee Kimdotcom).”

Print media outlets almost never guarantee coverage before (or even after) an event, partly to keep the strong distinction between covering an event for its newsworthiness and using editorial for the sake of promotion. Swan wasn’t happy. He emailed back:

“Yeah, no thanks … That’s not how journalism works I’m afraid. Good luck getting coverage though.”

Crikey spoke to conference organiser Cheryl Mack, who seemed rather perplexed and apologetic about the whole thing. She says the conference had instated the policy recently and had had positive responses from several outlets, until News Corp’s journo objected.

“It was something we tried. It definitely wasn’t a clause or set in stone,” she said. “It obviously wasn’t taken well.

“We want media coverage, and we tried something new. And we’re open to suggestions.”

It’s the second scandal to befall SydStart this year. When the first batch of panelists were released, they were all men. After a media backlash, there are a few women speaking now.

Of course, had SydStart been an entertainment event, the rules would have been somewhat different. Your correspondent’s queries yesterday revealed that in arts and entertainment journalism, where negotiations to access high-profile celebs come with plenty of strings attached, such demands wouldn’t have been odd at all. At Taylor Swift’s most recent tour of Australia, for example, journalists were told interviews would go to those most supportive of the tour — whether through pre-tour coverage, previous positive mentions or similar. — Myriam Robin

Australian Property Review. The weekly Fin property edition has made a return, with today’s edition of the Financial Review being around 25% property ads. That’s 16 and a quarter pages in a 64-page edition.

Independent journos wanted. Journalist’ union the Media, Arts and Entertainment Alliance has for the first time in recent memory invited applications for someone to take up its spot on the Press Council. The union is inviting applications until Monday, October 19 — the media section council will vote on the applicants.

Crikey understands there isn’t exactly a frontrunner for the position. Current union Press Council rep Alan Kennedy might choose to run again, but it’s not yet clear if he will. — Myriam Robin

Gannett goes fishing. Gannett Co, the biggest newspaper group in the US, is about to swallow a smaller rival in the Journal Media Group at a reported cost of around US$300 million. Gannett owns USA Today, America’s third-highest- selling paper, and 91 other publications. It was split from its TV and online arm at the end of June. The Journal’s biggest asset is The Milwaukee Journal Sentinel.

As Journal Media had a market value of US$192 million at the close on Wall Street overnight, Gannett would be paying a big takeover premium. Gannett is a giant with a market value of US$1.7 billion. If it happens, the deal would add Journal Media publications — which include a handful of dailies besides the Journal Sentinel as well as dozens of community papers throughout the midwest and south — to Gannett’s network of 92 mostly small- and medium-market daily newspapers across America.

Gannett has been busy revamping itself since late June — it first closed a printing plant in Minnesota, reached agreement to sell its London HQ (it has substantial newspaper interests in Britain) and on Tuesday announced plans to close a printing plant in the Washington DC area at a cost of 250 jobs

The Gannett move is a bit of a surprise as it was expected to try and buy Tribune Publishing, the much-reduced spin-off of papers in Chicago, Los Angeles and southern California (The LA Times is the big title). Its value at the close overnight was just on US$230 million, less than a third what it was at the end of 2014. — Glenn Dyer

Front page of the day. The Herald-Sun turns 25 … 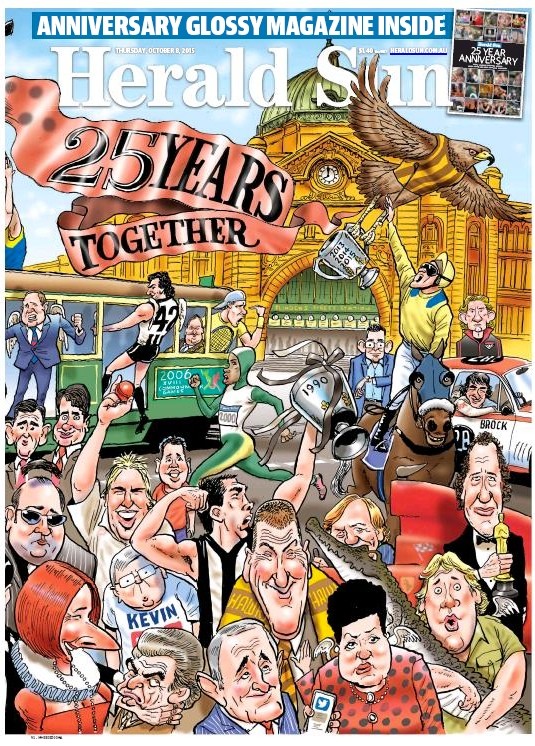