Gillard ‘hostile’, Rudd chucked a tanty: behind the scenes of The Killing Season

Sarah Ferguson gave her audience a peek behind the curtain of one of TV's most electrifying political dramas. 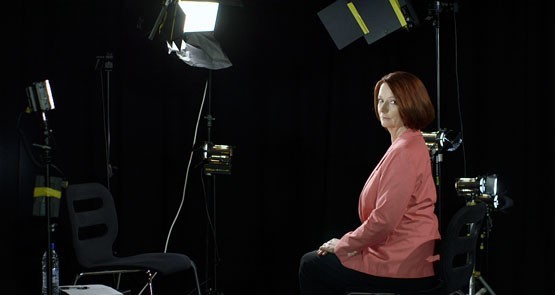 Julia Gillard was, before committing to the series, one of the most hostile potential interviewees Sarah Ferguson has ever come across, while Kevin Rudd told the ABC journalist he was pulling out of the Killing Season halfway through an interview after a particularly persistent barrage of questions.

These and other behind-the-scenes insights into the filming of The Killing Season were gleaned from Ferguson’s A. N. Smith lecture in Melbourne last night. Ferguson spoke before a smattering of Melbourne’s media establishment (well, the members of the establishment who weren’t at the Herald Sun’s 25th birthday bash across town — we spotted Age editor-in-chief Andrew Holden, Monthly/Sat Paper publisher Morrie Schwartz and our own Eric Beecher), issuing a rallying call for her industry to resist ever-encroaching limitations on the ability of journalists to tell the truth.

She said she often got asked when she would start on another series of The Killing Season, about the fall of Tony Abbott. But Ferguson said she had a broader concern: whether the ABC would be allowed to tell these stories at all in the future.

“The head of Netflix recently said no broadcast television in 30 years time. By then, we’ll be getting ready to make the Wyatt Roy Years, or the Sam Dastyari Season. The question is: will they, or other future leaders, allow the ABC to tell their history? Like John Howard did. Like Hawke and Keating did. Like Rudd and Gillard did. Or will our future leaders not trust the ABC anymore, or any media they don’t control?

“John Howard trusted the ABC to make a four-part series. Bob Hawke was always in favour of Labor in Power. Paul Keating was difficult, but eventually came round. Gillard and Rudd’s involvement in The Killing Season had many challenges, but both agreed eventually to take part fully with nothing in return.

“Will politicians doubt, or will they accept that the ABC has a role in curating their history? Or will they package their own versions and disseminate them on their own terms?”

Ferguson said both Rudd and Gillard had come to The Killing Season with huge reservations about the role of the media had already played in telling and influencing their stories. When negotiations began with Gillard, Ferguson said she quickly realised Gillard was “as hostile as any potential interviewee I have ever encountered”.

“It wasn’t personal. She just had a very dark view of the media. She wanted to know, before she would take part, whether we would examine the media’s role, which in her view was so egregious at the time that you couldn’t do her story justice without doing that. Rudd was similar — had a jaundiced view of the media, particularly the ABC. It helped that none of us came from the press gallery.” Their criticisms were echoed more recently by Tony Abbott, who urged the media to not act as the “assassin’s knife” in leadership challenges.

“I don’t wholly accept Abbott’s characterisation of the media, or Gillard’s or Rudd’s,” Ferguson said. “But it did make me reflect on our relationship with politicians, and how honest we are about the way their stories reach us as journalists … Does the culture undermine the audience’s trust in us?”

Gillard and Rudd were both highly skilled television performers, Ferguson noted. Both of them were capable of not directly answering a single question she asked.

Gillard’s interviews were polished and even. She’d already written a book on her prime ministership, and she was clear on what she wanted to say. “Gillard’s technique, I came to know, was a firm answer to a question you haven’t asked,” Ferguson mused. “Brilliant, that one.”

The interviews with Rudd were more taxing for him. He hadn’t spoken at length publicly about his period in power, and he was initially hard to pin down — The Killing Season ran behind schedule after Rudd had to delay some interviews to travel overseas.

“Just after Christmas, we set up in old ABC studio … I realised [Rudd] was extremely nervous,” Ferguson said. “So I hurriedly wrote a note to the producer … we have to go fast. I asked him if he was enjoying himself, he said no.

“After a period of time, Rudd retired to the green room and stayed there. I went in to see him. He sat on the sofa and said he wasn’t coming back. He said: ‘It’s like being in a witness box. Why am I the one answering allegations? I’m not doing it anymore.'”

“At that moment, the series really hung in the balance. I left him to his own devices, and then, all of a sudden … he suddenly perked up, put on his jacket, marched back into the studio and gave quite a brilliant afternoon’s interview.”

Ferguson said Jenny Macklin had always maintained that Kevin Rudd would perk up similarly for the 2010 election, while Gillard said that he couldn’t. “We’ll never know the answer to that question.”

Clarification: This piece has been changed to reflect that when Ferguson described Gillard as ‘hostile’, she meant only initially, before the former PM committed to participating in the series.

The usual suspects who post on Crikey with allegations of the ABC’s left-leaning bias may have pause for thought on learning both Rudd & Gillard ‘had a jaundiced view’ of the national broadcaster.

What is “the truth” – best defined by some opinionated hack?

I did not expect, and did not receive, any real insight from the prog. As Ferguson points out, how would two such highly opionated & badly thwarted, not to mention traduced, denigrated, betrayed and abused, egos be open & honest about their motives & machinations.
Nonetheless I enjoyed watching it. Just not very much.

The way Gillard was treated by the gallery, compared to the rails runs run given to “woe is me” Tony, it’s a wonder she didn’t tell you to f… off. I would have.

Sorry “you” refers to MS Ferguson.