Bigwigs in, journos out for Hun’s star-studded bash

There were celebs -- and Liberals -- aplenty at The Herald Sun's big birthday party. But noticeably absent were many of the paper's hardworking journalists.

Melbourne’s movers and shakers gathered at the Emerson Hotel last night to toast the 25-year anniversary of the merger of the Melbourne Herald and the The Sun News-Pictorial.

Some 350 guests descended on South Yarra for the invite-only event, which featured a star-studded cast of Melbourne’s glossiest and most successful, along with quite a few politicians. The event is pictured in all its shoulder-rubbing glory in today’s Herald Sun — you can read all about it there. Ex-Victorian premier Jeff Kennett turned up, but current Premier Daniel Andrews didn’t. Other attendees included Jeanne Pratt, Eddie McGuire, Daryl Somers and Melbourne lord mayor Robert Doyle. Rebecca Judd brought the glamour to the evening, with former treasurer Peter Costello also making an appearance. A picture of the guests (with the Melbourne Cup for some reason) featured in today’s paper. The photo features four prominent Liberal members: Costello, Doyle and Kennett, as well as John Elliott, but no one from the Labor side. Columnist Andrew Bolt is seated next to Kennett. Rupert Murdoch did not attend. 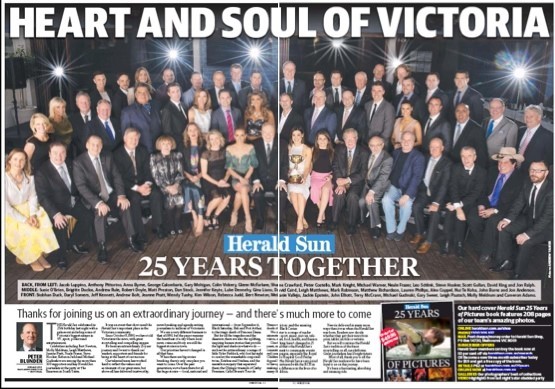 As is usual with these things, the list of who wasn’t invited is as fascinating as the list of who was. Long-standing Herald-Sun staff, including some very big names who worked at the paper for most of its history before taking redundancy or leaving, were left off the guest list.

“Apparently those of us who started huge projects but never made it to TV counted for naught. I worked there for 10 years and barely recognise the people I saw all over social media — aside from the celebrities who had nothing to do with its success,” one former staffer told us.

Here’s another: “I was there for nearly 20 years, and the first I heard about it was on social media. Very poor form and extremely ungracious. I’ve had calls and emails and messages from at least six former Herald Sun staffers who are more hurt than angry. It’s a very sad day.”

Even current staff weren’t guaranteed an invite. Crikey hears plenty missed out, with those covering sports and celebrity taking most of the spots. Some of the news division’s heaviest hitters were absent.

But there were other celebrations. Crikey was told that about 40 mostly former staff turned up at the Duke of Wellington on Tuesday night, where there was cynicism about Wednesday’s “celebrity” gig the following night; it was seen as more about securing celebrity endorsements for the paper rather than celebrating those who’d made it what it was. One popular topic of conversation on Tuesday night was the story behind the Herald Sun’s very first edition.

In Monday’s Australian, Darren Davidson wrote a piece about how 25 years ago Rupert Murdoch, in town for the launch, personally killed off a plan to have a story about Kerry Packer, who’d just survived a near-fatal heart attack, be the front-page story:

“Murdoch arrived and instinctively realised only one story mattered to footy-obsessed Victorians. Page 1 was consigned to the dustbin of history, Packer was bumped to a single column strip and a new headline was forever etched in the memory of Melbournians: ‘Lethal’s Weapon.’ 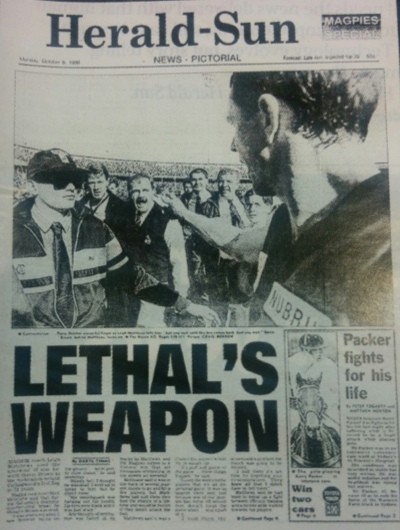 But that wasn’t precisely the way of it. Crikey is told the first front-page splash, “Packer fighting”, went into the full first edition — no fewer than 300,000 papers of the 840,000 sold, which doesn’t exactly seem like the dustbin. But then Murdoch came in and overrode the editor, grabbing photographer Craig Borrow’s back-page picture of then-Magpies star Leigh Matthews for the front page from the second edition on. Packer was reduced to just three paragraphs on the bottom of the page — pictured above.

Old news: how young voices are being left out of the media

God what an awful guest list, a whos who of Melbourne’s low society.There is nothing to celebrate about the Herald Sun, except it’s eventual demise.