Dispatches from the government in exile. Everyone knows Tony Abbott’s new Parliament House office — which is slightly larger than most backbenchers’ offices in having an extra meeting room — is next door to that of another recent backbench arrival, Bronwyn Bishop (and what odds would you have got two years ago of that scenario playing out?). The two are no-speakies after Bishop, in one of the most remarkable acts of political bastardry in recent decades, voted against Abbott because she felt slighted at his failure to support her enough over her creative use of travel entitlements. In any event, the other day Abbott’s office — where former prime ministerial chief of staff Peta Credlin is also located for the moment — was the destination for an interesting work of art. Political art, that is: a large electoral map of Australia was taken inside. Such maps aren’t exactly compelling aesthetically, but they’re very good for politicians and staffers planning electoral visits. Is Abbott planning the campaign that will effect a Rudd-like political restoration? Will he be ducking past Bishop’s office to that of yet another new backbencher, the far-right Kevin “keep me in Defence or the nation gets it” Andrews, to plot a return to power? Elba on Lake Burley-Griffin, or corridor of broken dreams? Time and the polls will tell.

Porn going soft? Some in the “adult product” (i.e. sex toy) industry have questioned the government’s new office in charge of protecting children from online bullies after some websites received interim take-down notices for pages selling pornographic DVDs that had already been classified under Australian law. The Western Australia-based website Absolutely Adult received notices last month asking for the pages advertising nine DVDs to be taken down, with owner Mark Coleman believing it was because the covers were more explicit than others on his site. The pages were taken down in accordance with the notice, but he had never received such a notice before. While the eSafety Commissioner’s main remit is to protect children online, it also handles complaints related to the Broadcasting Services Act, which were previously handled by the Australian Communications and Media Authority. The eSafety Commissioner’s hotline investigations team told Crikey that complaints had been received in relation to a number of pages advertising DVDs:

“The Office of the Children’s eSafety Commissioner has recently investigated a number of complaints about pages advertising adult DVDs. The advertisements were accompanied by images likely to be classified R18+ (and not subject to a restricted access system) and X18+. The Office issued the relevant content services with interim take-down notices. The content services responded promptly to the notices, ensuring that the material was either taken down or brought into line with Australian classification standards.”

The office said that between July 1 and September 30 this year it received 1182 complaints about prohibited offensive and illegal content, 325 of which were about adult content, and 830 about child sexual abuse material. We asked if the new office was actively seeking out prohibited content online and were told “all investigations carried out by the Office of the Children’s eSafety Commissioner are generally based on complaint”.

Creative accounting. Ms Tips is often impressed by the Australian Financial Review‘s ability to take completely non-business news and find an angle relevant to its readers. Today it was that one of the contestants on Channel Ten’s The Bachelorette is an accountant, hoping to “make it through Sam’s round of husband-hunting due diligence”. 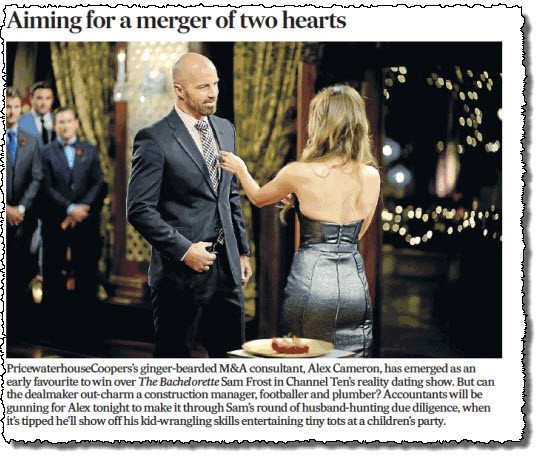 Know your product. Former Queensland premier Campbell Newman’s biography Can Do: Campbell Newman And The Challenge Of Reform was released yesterday, and it’s been an unqualified success … according to the publisher. Anthony Capello from Connor Court (who also published Senator Cory Bernardi’s book The Conservative Revolution) told the ABC the book had sold out of its initial print run of 2500 copies, and more copies were on the way. Popular Brisbane independent book shop Avid Reader (the Sunshine’s State’s Readings or Gleebooks equivalent) has refused to stock the book as an act of protest, and a picture posted to Twitter by Brisbane author and sometime Avid Reader employee Krissy Kneen shows there weren’t too many takers for Can-Do at his signing outside Angus & Robertson in the Brisbane CBD this morning. 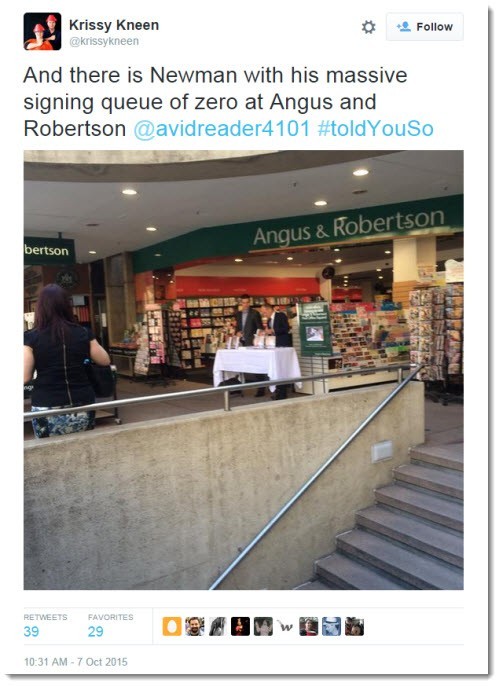 The official Brisbane launch is happening at the Tattersalls Club this afternoon —  the same men-only club the Queensland Liberal National Party chose as the venue for its International Women’s Day function. With ticket prices starting at $120 a head, it’s pretty clear to see that Newman wants a rabble-free function to welcome his book into the world.

I get knocked down … The saying goes that insanity is doing the same thing over and over again but expecting different results, and a Christian group predicting the end of the world seems to have learnt the lesson … kind of. The E Bible Fellowship, an online group that insists it’s not a church, predicted the end of the world in 2011, which of course turned out to be a little off. Undeterred, the group has come up with another doomsday prediction — for today. The group bases the prediction on a select few Bible quotes and some dodgy maths that Ms Tips’ heathen mind could make little sense of. The group seems less sure than standard end-of-the-world predictions — the pamphlet is titled “A strong likelihood that October 7, 2015 will be the end of the world”. We’ll stay in the Crikey bunker for the day, just to be sure. 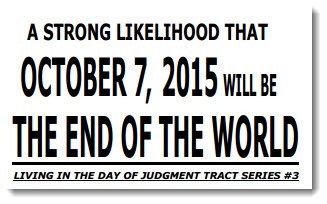 It is likely most of your readers who saw the expurgated version of Matthew Condon’s “All Fall Down” (the 3rd book in his Trilogy) on television recently wouldn’t bother buying the book.
Until I was part of the Gleebooks audience last night I was of the same mind, but that experience opened my eyes, and I’m urging acquaintances to purchase it.
Keep your eyes open also for his next effort, the working title of which could very appropriately be “The 4 Horsemen of the Apocalypse.”

Give it a couple of weeks and the Campbell Newman book will be in the $2.99 specials bin.

Will the Abbotrocity’s “Wheels of Spleen” or “Rolling Blunder” tours be pedalling?
Or peddling his paucity of political visdion?