The Australian economy is performing better than the gloomsters think, but lifting growth has nothing to do with penalty rates, Bernard Keane and Glenn Dyer write. 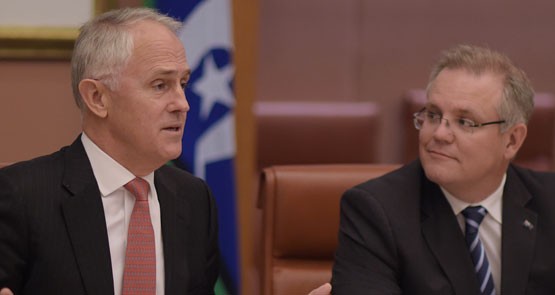 While the now almost ritualistic downgrading of growth forecasts, including for Australia, by the International Monetary Fund is hardly good news, it reinforces that, despite the crash in commodity prices, the economy is still travelling OK. Not as strongly as we’d like, and not strongly enough to make a serious dent in unemployment, but also not enough to ring alarm bells, and certainly nothing to justify the mutterings of recession by some analysts, particularly off the back of pessimism about China.

But the IMF’s forecasts of 2.4% this calendar year and 2.9% next year aren’t as strong the budget’s forecasts (2.75% for 2015-16 and 3.25% for 2016-17), giving further credence to the view that former treasurer Joe Hockey’s second (and last) budget was very optimistic about growth. We’ll find out in a couple of months whether new Treasurer Scott Morrison is going to be as positive, in the forthcoming Mid-Year Economic and Fiscal Outlook.

Perhaps Morrison shouldn’t take his lead from Treasury forecasts, but from those in the Reserve Bank’s fourth Statement of Monetary Policy for the year, to be issued next month, with its new estimates of GDP and inflation for 2015 and 2015-16 and 2016. They may well be closer to the mark than Treasury’s figures.

But the Coalition appears convinced that the key to stronger growth remains in preferential trade agreements and industrial relations deregulation.

We’re yet to see the nonsense the Department of Foreign Affairs and Trade will produce as part of its “National Interest Analysis” for when Parliament’s Treaties Committee considers the Trans-Pacific Partnership — a document that will be untarnished by the contribution of independent economists and most appropriately lodged in the fiction section of the Parliamentary Library. But it’s worth recalling what the Productivity Commission says about preferred trade agreements, which this government constantly hyped under Tony Abbott — a tradition continued now under Malcolm Turnbull, who absurdly called the TPP “the foundation for our future prosperity”. In the PC’s view of bilateral and regional trade agreements (BRTAs):

“Theoretical and quantitative analysis suggests that tariff preferences in BRTAs, if fully utilised, can significantly increase trade flows between partner countries, although some of this increase is typically offset by trade diversion from other countries. The increase in national income from preferential agreements is likely to be modest. The Commission has received little evidence from business to indicate that bilateral agreements to date have provided substantial commercial benefits.”

The PC says “modest”; a politician says “foundation for our future prosperity.” Take your pick.

Then there’s the Coalition’s obsession — reflecting that of the business groups it represents — with industrial relations deregulation. Penalty rates have again surfaced on the policy agenda, as they now do after every long weekend, which elicits complaints — always anecdotal, never backed up by actual evidence — that a local cafe owner can’t afford to open on Sundays.

There’s a two-fold problem here. First, Australia’s tepid economic growth has nothing to do with Sunday penalty rates: in employment terms, the cafe and restaurant sector has been powering along at twice the growth rate of the rest of the economy. Indeed, it has little or nothing to do with industrial relations: both the PC — which recommends some fairly minor adjustments to the system rather than a full-scale overhaul — and the Reserve Bank have made a point of noting the existing Fair Work Act system is flexible and has assisted in enabling the economy’s transition from a mining investment boom to a more normal pattern of growth, by trading off lower wages for higher employment. That flexibility has been reinforced by the continuing rise in demand for labour with the regular Australian Bureau of Statistics survey and the monthly job ads report from the ANZ both showing three year highs for vacancies, driven by weak real-wage growth.

The other problem is that employers are dead keen to pay lower wages, but would prefer if all other employers didn’t cut wages, because that will undermine demand. Cutting penalty rates, even if you can mount a case that logically there’s no basis for Sunday rates to be higher than Saturday rates, will reduce wages, particularly for low-income earners, who necessarily spend a larger proportion of their income than middle- and high-income earners.

Cutting penalty rates now would exacerbate the current problem of weak, or non-existent, wages growth, which is not helping overall demand levels or the government’s fiscal problems — it’s all very well to warn of bracket creep, but when workers’ wages aren’t rising, it rings a little hollow. It’s also a poor look when the biggest problem around penalty rates is the systematic evasion of remuneration obligations by employers like 7-Eleven, rather than the impact on employment of penalty rates.

While they obsess about penalty rates, the Coalition apparently is content to ignore a significant economic problem that has developed on their watch — the collapse in public infrastructure investment. With everyone from Labor and business to the Reserve Bank and the IMF calling for a steady pipeline of rigorously assessed projects to be put in place, the federal government’s apparent unwillingness to live up to its rhetoric in infrastructure will mean lower growth and lower productivity into the future. An agile, innovative economy needs investment in all types of infrastructure, from transport and renewable energy to broadband and health (the biggest employing, and hardest-to-measure, sector of the economy) and education.

With building approvals and housing finance data suggesting the current housing construction boom has peaked and is now starting a long slowdown, replacing it as the driver for the economy’s transition from the resource boom is vital. Infrastructure stands out as the easiest and most logical new driver. There’s a well-established mechanism in Infrastructure Australia, has obvious benefits for an “agile” economy and has been long promised, but avoided by the Coalition. Instead of obsessing about cutting workers’ wages, the government would do better to focus on reversing the dramatic decline in infrastructure investment, starting with MYEFO.

Infrastructure or infra dig? It’s time to get politicians out of building

It won’t be easy to deal with the mess left by their predecessors of course, but at least there’s an effort to work towards a light at the end of the tunnel created by those predecessors.

Would a cut in penalty rates increase the number of households eligible for Social Security payments?

And what is the economic benefit of households frittering away income at Sunday restaurants? Better socially and economically to have a picnic in the park.

Is agile a policy..? maybe we need a minister for agility..
looks like penalty rates are going to get agiled..

Drop your silly bias and see the facts
Howard was the one labeled profligate
The previous Govt was commended by every reasoned and neutral economic commentator for the it’s handling of the GFC
The current Govt’s two terrible budgets have demonstrated an incompetence rarely seen in a little over two years they have doubled the debt and failed on any reasonable measure to advance some needed reforms whilst at the same time polarising the community to make achieving consensus even harder. This betrayal of trust will burn our hopes for reform for years to come.

The classic proof of the stupidity and incompetence of Abbott/Hockey was their approach to renewable.