It was a footy-flavoured week in politics, amid talk about the TPP.

Listening was this week’s theme in politics. Numbers across our top 20 reflect this, with a big drop in raw totals from Prime Minister Turnbull in first place to second, former PM Abbott.  Turnbull hosted an economic reform summit early in the week, with “everything on the table” and no Captain’s Calls announced, while Abbott had lunch with former Treasurer Joe Hockey and former PM John Howard and said he doesn’t want to “simply surf and cycle for the next 20 years”. Nice to have the choice though, I’m sure.

Foreign Minister Julie Bishop remains in third place after she voiced weariness of Russia’s involvement in Syria, and helped change the rhetoric around the Islamic “death cult” by describing Muslim families as our first line of defence against the radicalisation of youth, following the fatal shootings of a Parramatta police officer and the 15-year-old alleged offender over the weekend. Bishop also endorsed Australia’s 2029 UN Security Council bid as cheaper than one for an earlier spot (and predicted MP Wyatt Roy’s ascension to the throne! Spill, spill, spill).

The other big story of the week was the Trans-Pacific Partnership between 12 countries, signed yesterday and pushing Trade Minister Andrew Robb up 19 places this week into fifth. It’s unlikely to be passed by the US Congress and Canada is facing a national election, while PM Turnbull denied rumours it would negatively impact our Pharmaceutical Benefits Scheme. 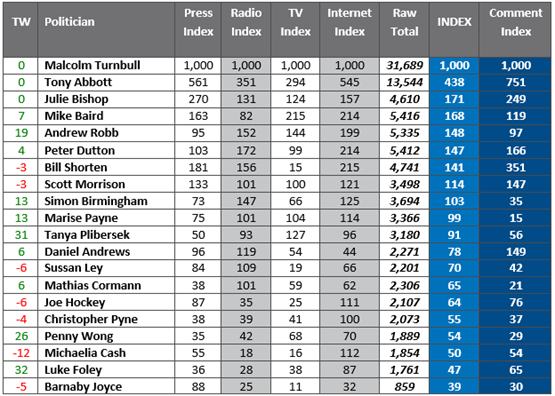 The PM tracked his travels by public transport (no choppers here!) on Twitter, in Melbourne for the AFL and reportedly poking fun at the city for having a public holiday on grand final eve.

NSW Opposition Leader Luke Foley caused a ruckus on talkback after he called for more mosques in the state, in the hopes it would decrease radicalisation. Caller Penny on 2UE: “It’s absolute bollocks… my mother was Buddhist and she didn’t ask for more temples”.

Yet another episode in the Johns brothers public display of poor behaviour. But we would never suggest that he’ll undoubtedly turn up on the telly in a few months’ time…

AFL and NRL both beaten by an ABC rerun

Australia shows its commitment to Married at First Sight