The Australian government knew that the Nauruan government planned to "open" its asylum seeker detention centres before the legislation was made public. 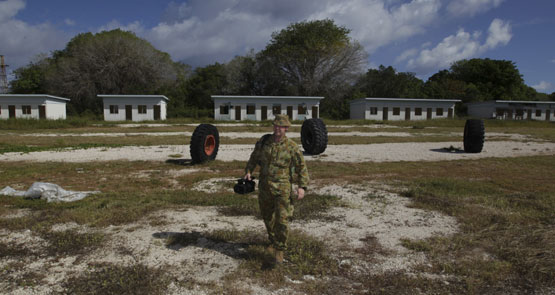 On Friday last week, the government of Nauru announced it would make its detention centres in Nauru “open centres”, with asylum seekers free to come and go, 24 hours a day, seven days a week, and would quickly process the outstanding 600 asylum seeker claims in the next week.

Although the “open centre” arrangement is effectively in name only, with the asylum seekers required to still live in detention centres, and restrictions said to be placed on what they can take in and out of the centre, the Australian government is clearly relying on this new open centre arrangement as part of its argument in the High Court. In an internal document from the DIBP, seen by Crikey, it is stated that on October 1 the Australian government approached the High Court to inform the court about the Nauruan government’s “decision to expand the open centre arrangements”.

Yet the Nauruan government announced on October 2 it was going to put the legislation for an “open centre” arrangement before its parliament, on the same day the Australian government was required to file an affidavit that would be made public revealing the new open centre arrangements.

The government is also not downplaying the significance of the case, according to the internal document:

Yesterday it was reported that an officer in the DIBP was internally urging that the department try to return, from mainland Australia, as many asylum seekers to Nauru as possible ahead of the High Court hearing.

Almost as explosively, the document seen by Crikey also reveals that the government is attempting to appeal a landmark Federal Court ruling that the Department of Immigration and Border Protection did not offer a fair process to help asylum seekers whose data the department accidentally published online.

Dozens of cases have been lodged in the Federal Court asking for those asylum seekers whose data was published to be granted protection in Australia from potential persecution in their home countries as a result of the breach. A number of the claims have been dismissed, but a recent judgment of the full bench of the Federal Court found that in the case of two asylum seekers, the department’s handling of their claims in light of the department’s own data breach had been “unfair to a significant degree”.

The court found that in the case of the two asylum seekers, the procedures in place to determine their claims after the data breach had been unfair.

“Rare is the case where a decision-maker asks a claimant to make submissions about what should happen in consequence of a failure to adhere to statutory safeguards of confidentiality committed by the decision-maker affecting the claimant,” the three justices said in their judgment.

At the time of the judgment, the department did not say whether it planned to appeal the decision, but in the leaked document, the department has said it will challenge all but one of the findings of the court, and that it filed an application for special leave to appeal the case to the High Court at the end of September. The government will not challenge the court’s finding that then-immigration minister Scott Morrison had been considering lifting the bar, preventing the asylum seeker from applying for a protection visa.

The Department of Immigration and Border Protection confirmed, when asked by Crikey, that an application for special leave to appeal the case to the High Court had been filed, but declined to comment further.

It has always been a myth that Nauru runs the detention centres. Australia runs the whole show and always has done.

There is an evil sickness in the department of ignorant criminals and the ministers who run them and has been for decades, since the White Australia policy really.

Who do these cowards think they are that they can abuse, torture and traffic innocent humans.

And I note that the ignorant John H has stumbled here with the usual lies about stopping the non-existent people smugglers by torturing and raping a couple of thousand refugees in the Pacific.

Perhaps the ignorant John H is not aware that 16 million people fled their homes last year alone and that they all paid someone to do it.

It is not people smuggling, no-one has been smuggled to Australia and our own courts have been saying that since 2000.

We are not allowed to punish people because of who they paid, but not one lazy journalist ever bothers to even read the protocols, let alone report on them.

The majority of Americans accepted slavery. Do we contend therefore that slavery is right?

Will you accept responsibility for all the refugees who are tortured and killed at the hands of their persecuters because they were unable to escape or, worse, escaped but were towed back to where they ran from ?