Campaign to vindicate Joh’s crooked cop too little, too late

A Queensland QC is trying to exonerate one of the top cops associated with the reign of Queensland premier Sir Joh Bjelke-Petersen. 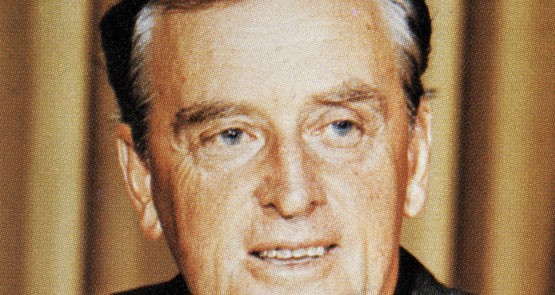 Des Sturgess QC, a former Queensland director of public prosecutions, has emerged from retirement to support a campaign to cleanse the reputation of one of the Moonlight State’s most corrupt cops, the late assistant commissioner Tony Murphy.

Sturgess, now in his 80s, has startled former legal colleagues by writing a glowing endorsement of Murphy, the leader of the infamous “Rat Pack” during the era of premier Sir Joh Bjelke-Petersen.

In a foreword to a recently released ebook, titled Tony Murphy — An Honest Cop, Sturgess contributed a piece called “My Friend” in which he says:

“I knew Tony Murphy well, our friendship, however, being work-related and not social.

“He was a busy detective and I a barrister with notions of establishing a practice in the criminal courts.

“Murphy was by way of being the best-known policeman in the Queensland police force. During his career and afterwards he was to be much investigated, but nothing ever came of it.”

Sturgess, Queensland’s first DPP between 1984 and 1989, is familiar with Murphy’s brushes with the criminal law. Sturgess represented him in 1972 when he was facing perjury charges and the case was thrown out by a Brisbane magistrate for lack of evidence.

Award-winning Brisbane journalist Phil Dickie has listed the “Rat Pack” coppers and criminals that Sturgess represented in the Bjelke-Petersen era.

Although it is true that Murphy was never convicted, his notoriety was legendary. Just as Roger Rogerson was the most notorious detective in NSW, Murphy, 1927-2010, carried the same dubious reputation north of the border.

His coterie of supporters have come out of woodwork since publication of journalist Matthew Condon’s trilogy of non-fiction books, Three Crooked Kings (2013), Jacks and Jokers (2014) and All Fall Down (2015), exposing political and police corruption while Bjelke-Petersen served as premier, 1968-1987.

In his strident defence of Murphy, Sturgess has chosen to ignore the accumulation of evidence now in the public arena. A document sent in 1984 to Brisbane Labor MP Kevin Hooper (now deceased) named Murphy as head of “The Rat Pack” and continued:

“The men of the Rat Pack have been able to ‘corrupt’ politicians, men of other government departments and leaders of industry by using the resources of the Police Department for non-police purposes. These men are able to exert influence over not only politicians, but members of the judiciary, magistrates, trade union leaders, businessmen and jurors.”

Murphy’s career of corruption, extortion and frame-ups caught the attention of Ray Whitrod, the cleanskin Queensland police commissioner who resigned in disgust in 1976 when Bjelke-Petersen appointed Lewis as deputy commissioner.

“Police corruption is not a matter of a few rotten apples. What you really have in any police force is a case load of susceptible apples. For many years now, there has been an east coast network of corrupt police officers in key positions who have run operations worth of lot of money to them and their associates.”

He rated the Queensland force as the worst.

Bjelke-Petersen’s handpicked police commissioner Terry Lewis, one of Murphy’s associates in The Rat Pack, was convicted on corruption and forgery charges in 1991 and given  a 14-year jail term.

In his personal diary for May 2, 1996, Lewis recorded a conversation with Sturgess in which the QC is alleged to have said:

“I have said some harsh things about you and others in the past but now should look to the future. I admired the way the drugs laws were administered when you were there (as commissioner). The police force has paid a terrible penalty from the Fitzgerald Inquiry. The media make the police a whipping post. The morale of the force is low.” (Lewis’ diary entry quoted by Matthew Condon in All Fall Down, page 529).

Sturgess has accused Condon of “selectivity” in his investigation of the 1981 murder of drug dealer William Paul Clarke and his wife, Grayvyda. Their charred bodies, riddled with hundreds of shotgun pellets, were found in the burnt-out ruins of their far-north Queensland home; the cop in charge of the investigation was regional commander Tony Murphy.

More than five years after the double murder, a man named Terry Sichter went on trial in Brisbane Supreme Court. He was found not guilty and outside court claimed he was the victim of a “police set-up”. Two years after his acquittal, Sichter was found shot dead. No one has ever been convicted of the Clarke murders.

The recent attempts to sanitise Murphy’s career and present him as “An Honest Cop” have been greeted with a mixture of hilarity and disbelief. Unfortunately for Murphy’s coterie of apologists, the detective known as “The Godfather” was indeed a corrupt and crooked cop. The people’s verdict is in and it won’t be changed by anything Des Sturgess QC might say.

Atomising and mystifying: why the nebuliser is the perfect symbol of our times

As Matthew Condon has pointed out, it’s not the publication of this nonsense that’s offensive, but rather the manner in which the crooks’ associates have forced unsolicited copies of the book on bystanders attending the launch of the powerful factual story, “All Fall Down.”

As I recall at the end of the Fitzgerald Inquiry, Fitzgerald said that all Queensland police from Sergeant and above should be replaced.

That did not happen, being impractical, and I have no doubt that Queensland has suffered since.

Despite the passing of the years the stench from this era hangs heavy and seems to intensify when defended.

Thanks Des, ‘as crooked as a Queensland cop’ deserves coining for a few more decades and now you’ve reminded everyone why.