Are you sure you want to live like common people? The thing about starting a sentence emphasising how in touch one is with the average person is that one needs to make sure that what follows doesn’t contradict the idea of being in touch with the people. “See, Labor is not out of touch with how people make their money,” Opposition Leader Bill Shorten said at a press conference yesterday defending penalty rates on public holidays.

Shorten defended himself this morning on Twitter, saying that he supports public schools, and saying that he was referring to “small Catholic and Christian schools that charge low fees”.

This didn’t impress advocates for public schools or penalty rates, with the Greens’ Adam Bandt saying: “If we start linking weekend rates to private schools, then we’ve lost the argument.” Indeed.

Erica’s new role. While ex-defence minister Kevin Andrews has been busy telling anyone who will listen about his achievements in the role (even if it means beating his successor to official announcements), Senator Eric Abetz has been a bit quieter, popping up to say that hundreds of Liberal Party members had contacted him to say they had left the party in the wake of Turnbull’s coup — a claim that was later refuted by various state branches, which said that overall numbers were up since the leadership change. Abetz doesn’t have a lot to do now, so we’re glad to see he still has one role within the Liberal Party — promoting Tasmania. Next Wednesday evening Abetz will host a Flavours of Tasmania event at Parliament House, which is advertised with the tagline “get a taste for it”. We’re glad Abetz has some form of comfort — Tasmanian cheese and wine should do the job.

Weighty matters. Christmas came early this year for the tabloid press in the form of Auburn Council deputy mayor, who shut down streets for his extravagant wedding in August, followed by accusations that some of his property development deals were not above board. Last night on Channel Nine Salim Mehajer defended himself in a bizarre interview in which he asked for a lectern to answer questions, with his new wife standing behind him — two metres behind, as requested by Mehajer. He said that he hadn’t made decisions on the council to benefit his developments, but the accusation that cut deepest is most revealing about Mehajer. Accused of threatening a gym owner who told him to stop dropping weights, Mehajer said: “Not only are these allegation false and misleading, but they are sheer evil and unAustralian.” Heaven forfend.

Pagan sacrifice. We thought we had some odd politicians in Australia, but as usual Americans take the cake when it comes to weird and wacky. A candidate for the US Senate in Florida has admitted to killing a goat in a pagan sacrifice and drinking its blood. The Libertarian Party candidate, whose name was legally changed to Augustus Sol Invictus, which means “majestic unconquered sun” in Latin, has been disowned by his party.

“I did sacrifice a goat. I know that’s probably a quibble in the mind of most Americans,” he told a reporter. “I sacrificed an animal to the god of the wilderness … Yes, I drank the goat’s blood.”

Verdict is in. Channel Nine has announced the full panel for the opening episode of new Karl Stefanovic’s The Verdict, and Mark Latham is top of the list. Is this the commercial opportunity he’s been waiting for to admit to his Twitter account? The topics to be covered include “should sports stars guilty of a crime be allowed back on the field?” and “why does a teenager turn into a terrorist?” It’s a large panel with seven guests — none of whom are shrinking violets. Will Latham even be able to get a word in? 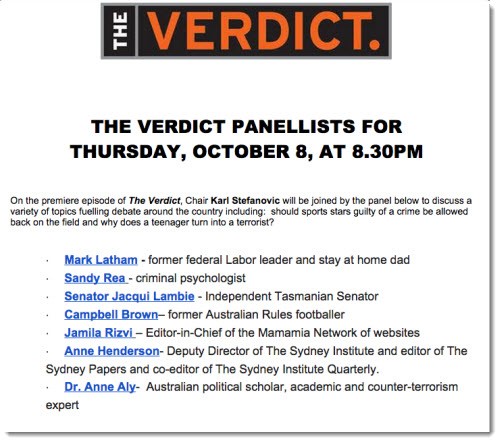 The Verdict – from the far right all the way to the loony right. Good spread

Stefanovic & Latham in the same studio – not as potentially entertaining as David Marr & Piers Akerman formerly sharing the sofa on ABC’s ‘Insiders’.

Huh, I think I’ve actually had a few facebook discussions with that Augustus chap.

Drinking blood? At least it is fresh, unlike black pudding, so beloved oop Norf in the UK.

“And now a word from our sponsor …. Prozac…”