Turnbull sets terms for a reset of terrorism rhetoric

The response to Friday's shooting in Parramatta demonstrated how Malcolm Turnbull is fundamentally altering the way the government discusses terrorism. 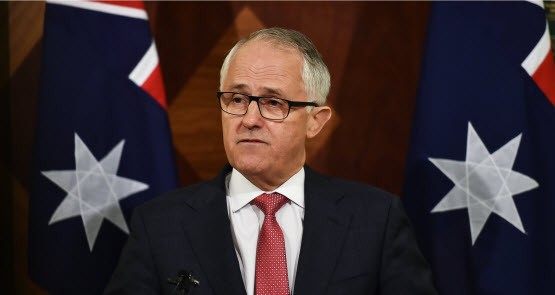 The first evidence that Malcolm Turnbull was determined to take a different approach to how the government spoke about terrorism emerged quickly in the days after the removal of Tony Abbott: the phrase “death cult” vanished entirely from the government’s vocabulary. Its last use was by Abbott in Port Moresby on 10 September; between variations like “apocalyptic death cult” and “Daesh death cult” — someone had belatedly told Abbott “Daesh” was a derogatory term for Islamic State, so he embraced it long after other leaders — Abbott had used the phrase dozens of times.

That was in keeping with Abbott’s approach to terrorism, which consisted of relentless hype. Not merely was Islamic State a “death cult”, it had “far-reaching tentacles” and was the greatest threat in history, an “existential threat” as Attorney-General George Brandis claimed. It was a greater threat than the Soviet Union, according to Julie Bishop, and one that had been produced by Arabs themselves, in her view — in Bishop’s account, Islamic State had emerged from the Arab Spring; the role of the Western invasion and occupation of Iraq was irrelevant, apparently. The government’s language about terrorism was so facile and absurd that Turnbull publicly criticised it at the time.

Abbott also used terrorism to attack the Muslim community, saying in February “I’ve often heard Western leaders describe Islam as a ‘religion of peace’. I wish more Muslim leaders would say that more often, and mean it” — an astonishing statement given the frequency with which Muslims leaders across Australia have repeatedly criticised IS and specific terrorist incidents, such as the Charlie Hebdo killings.

This represented a significant change in tone for Abbott, who in 2014 had repeatedly sought to use moderate, inclusive language about the Muslim community, in line with his “Team Australia” theme. But the experience of nearly losing his leadership and the poor polling that continued after that led to a shift in Abbott’s political tactics to embrace a more aggressive stance toward Muslim Australians. “Team Australia”, already on the way out due to relentless mockery, was dropped altogether by Abbott in his post-spill Dead Man Walking phase.

While security agencies would have been happy to see IS elevated to the status of the greatest ever threat to civilisation — which would tend to mean greater receptivity to claims for more funding and more power from the likes of ASIO, the AFP and state and territory police forces — there were warnings as early as last year that any targeting of Muslim communities would undermine agencies’ relationships with them and damage their capacity to gather intelligence. Rather than heed that advice, Abbott decided to recklessly target Muslim leaders to shore up his own terminal political fortunes.

What turned 15-year old Kurd Farhad Khalil Mohammad Jabar into a killer, one who callously, and apparently randomly, murdered Curtis Cheng isn’t yet clear. As soon as he was identified by the media, he was described as “radicalised”. That term is thrown about with abandon by politicians and the media, although the actual process is poorly understood and one of the world’s foremost terrorism authorities disputes the fundamental idea of “radicalisation”. The recent history of terrorism, in which mental illness and drug use play as significant a role as extremist interpretations of Islam in driving individuals to launch attacks, further confounds the “radicalisation” narrative.

But in the Prime Minister’s response to the murder on Saturday morning, there were no death cults, no tentacles, no existential threats, and no criticism of Muslims. Turnbull’s language was very different to that of Abbott. “It is also important that to remember that the Australian Muslim community will be especially appalled and shocked by this. As Commissioner [Andrew] Scipione and the Premier have noted, we must not vilify or blame the entire Muslim community with the actions of what is, in truth, a very, very small percentage of violent extremist individuals. The Muslim community are our absolutely necessary partners in combatting this type of violent extremism.”

Turnbull then returned to that theme a minute later, adding: “It’s also important to understand the critical importance of the collaboration, co-operation with the Muslim community. Efforts to blame or vilify the Muslim community are utterly counterproductive.” It was also reported that Muslim community figures participated in a conference call between Turnbull and state and territory leaders.

As intelligence and law enforcement agencies can attest, how we talk about terrorism is an important factor in how we try to stop it. From a national security perspective, rebuilding the relationship between governments, their agencies and the community that is most affected by “radicalisation”, however defined, is crucial. Tony Abbott, obsessed with scraping the bottom of the political barrel for anything that could shore up his position, would never have done it. Turnbull, with altogether better political stocks and the confidence of his party, can continue what Abbott tried clumsily to do in 2014.

Finally some adult responses.. we can assume I hope that Abbotts khaki election strategy has been jettisoned..now we need to get out of the middle east and stop bombing people..

Is Lady Penelope to be reprogrammed too?

As an editorial in the SMH put it succinctly, “If you treat people as outsiders, you create outsiders”

One of the few good thing about this tragedy, is that it happened after Abbott had been booted.
I dread to think what sort of hysterical inflammatory bile, our previous PM would have sprayed via the media megaphone.

Turnbull demonstrated maturity and intelligence with his response. Let’s hope this filters through to better overall communication with Australian Muslims.

Abbott would’ve used this tragic event as leverage for god only knows what.