A ‘secret’ trade deal and the damage done

If trade ministers have reached a deal on the TPP, it will just be the start of a process by which Australia's national interests will be further damaged. 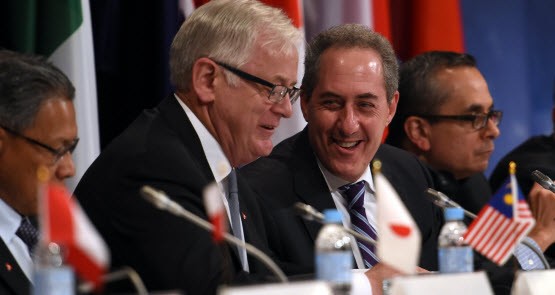 There are confusing reports today out of Atlanta, where trade ministers from 12 countries are rushing to finalise an agreement on the Trans-Pacific Partnership ahead of the Canadian election — the Canadian government is negotiating while officially in caretaker mode, which has prompted one opposition party to say it will refuse to be bound by the deal — and the building 2016 presidential/congressional elections races in the US.

An agreement that leaves intact Australia’s current position on biologic drugs — under which competitors cannot develop similar drugs based on the same clinical data for five years — is said to have been reached, which is likely to infuriate the US pharmaceutical industry and the politicians it funds in Washington: they wanted the US standard of 12 years’ protection imposed via the TPP. Whether other snags over access to North American agricultural markets have been overcome remains unclear. A media conference to announce the conclusion of the deal, which has been years in the making, was postponed indefinitely this morning Australian time.

While the government will boast about hanging tough on biologics, they were never the biggest problem in the TPP — although accepting the US position would have led to a dramatic blow-out in the Pharmaceutical Benefits Scheme that would have flowed directly to the bottom lines of big pharmaceutical companies.

The real threat from the TPP to Australia was always in broader intellectual property restrictions that the United States wanted to impose, of which biologics were just one example; the Productivity Commission has identified intellectual property — particularly in the Australia-US Free Trade Agreement — as an area where Australia’s national interest has been harmed by so-called “free trade agreements” (more accurately, preferred trade agreements, as the PC calls them, or “managed trade” agreements, as some economists suggest). The other threat, of course, is the investor-state dispute settlement mechanism, whereby companies will be able to sue governments, using hand-picked pro-business arbitration panels, for any public policy changes that cost them money, meaning multinational tax laws, climate action policies and attempts to protect public health can become the basis for billions in compensation payments.

There’s one positive to any conclusion to the TPP, however: citizens of the 12 countries will finally be allowed to see the treaty. In Australia, the Department of Foreign Affairs and Trade has negotiated the entire agreement in secret; the only way Australians have been allowed to see what their own and other governments were proposing was via draft chapters published by Wikileaks. “Negotiated in secret”, however, is a little inaccurate, because while voters have not been allowed to see the treaty, major corporations and peak US industry bodies have not merely been allowed to see the text, they have, in fact, dictated it to the US government. Emails of the US Trade Representative (USTR) obtained under freedom of information laws show industry groups celebrating the inclusion of text they have drafted in the US’ proposed TPP draft: “Someone owes USTR a royalty payment. These are our rules,” one US chemical company executive wrote with delight when they saw a chapter on rules of origin. “This is a very pleasant surprise.”

While big American companies have been allowed to draft the text, the Productivity Commission here has repeatedly complained about the poor quality of “free trade agreements” and the overhyping of their benefits, and in particular criticising the government’s process around the TPP. In July, commission chairman Peter Harris outlined a detailed process whereby the PC could independently assess complex agreements like the TPP. “We think this type of post-negotiation assessment offers a pragmatic, workable approach, and — provided the pre-negotiation analysis is comprehensive and rigorous — could be completed in around four months,” Harris said. “I understand the TPP will have around four months in front of the US Congress, so this would appear reasonable based on other countries’ practices.”

So far, the government and Trade Minister Andrew Robb have shown no interest in allowing the PC to vet their often wildly over-the-top claims about the benefits of any trade agreements. DFAT — which has minimal economic expertise — has in the past expressed angry resentment that the PC has assessed bilateral trade deals and found them of minimal benefit. If a deal has been concluded, there will no longer be any excuse for Robb to withhold the deal from PC scrutiny — except if it’s a bad deal, the harmful parts of which he wants to keep hidden.

And bear this in mind about the TPP and all other trade agreements involving the United States: even after other countries have signed up, the US arrogates to itself the right to not sign up itself until it has vetted each countries’ implementation of the treaty, and, if necessary, direct countries it believes have not implemented a treaty in accordance with the interests of US firms. This process, known as “certification”, means that no matter how much or how little Australia caves in on crucial issues, the US will attempt to use its own interpretation of the treaty to direct Australia on how to legislate its implementation.

If there’s a deal today, the TPP isn’t over by a long way. And for Australia’s national interest, it will only get worse from here.

The whole process is a disgrace and shows once again how successive Australian governments (both sides) seem happy to hand over our sovereignty to the big corporations.

How is it possible that ANY Australian government can sign a trade agreement without the whole process being voted on by both houses of our parliament?
Surely this is totally undemocratic?
Why can’t the Productivity Commission analyse the whole deal (as you say America can), before the agreement becomes set in stone?
Isn’t this wholesale derogation of responsibility to the Australian people bordering on treason by this government?
The whole process is mind-blowing!!

DFAT has “minimal economic expertise”? Nonsense! Why, their mercantilism is honed by some of the finest economic minds of the 17th century!

Nothing further to add to my coimment to the Editorial – this stinks to high heaven .
But what I find weird is the pig headed determination to foist this idiocy on the electorate by our… what’s the word .,, representatives.

You will have to pardon my ignorance. You see, I’ve always thought this was the whole point of Trade Agreements. (TTP) Usually our politicians enter into Trade Relations/pacts with countries far bigger and stronger than ourselves. Once we’ve sold our mineral wealth off to foreign companies the same countries decide to really hammer the Bejezus out of us by using their superior knowledge of historical evidence. Added to which we have fifth-rate politicians with all the street-smarts of a a second hand toothbrush.

It’s all to signify what a bunch of amateur poliicians we are.

Where’s your sense of humour, Bernard? Common now we Australians get a thrill watching our birthright being pissed away. By bloated little gnomes like Andrew Sindodinos
(Sic)