Turnbull on the tram ... God's team ... Bauer's adult employees in a colouring-in competition ...

That’s what I like about … It’s fortuitous timing that both the AFL and NRL grand finals are on this weekend, as well as Australia playing England in rugby union early on Sunday morning. It’s a festival of sports that should interest most of the population. Earlier this week Prime Minister Malcolm Turnbull made a rare oratorical stumble at the Dally M award night, and this morning he is in Melbourne to mark the AFL grand final between Hawthorn and West Coast, with no awkwardness so far.

The PM has shown that his newfound power has not gone to his head, tweeting a photo on the tram this morning — his fellow commuters seemed unperturbed, with one even reading what Tony Abbott had said about Turnbull on 3AW in today’s Age. The PM made a subtle dig at Victorian Premier Daniel Andrews for today’s Victorian public holiday — Andrews’ dedication to fulfilling an election promise no one asked for has been roundly criticised by local Liberals and small business owners. 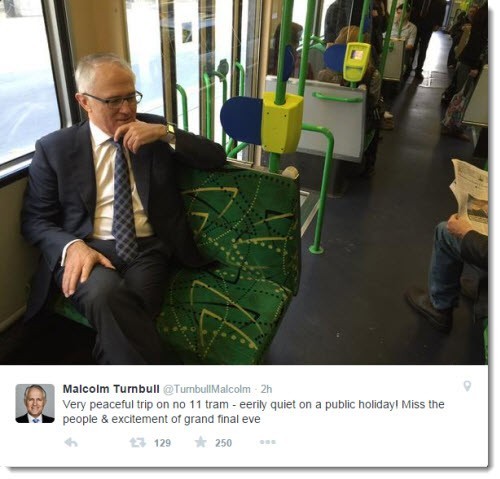 Yesterday Turnbull showed his colours, saying he tipped West Coast in the AFL and the Cowboys in the NRL, in light of the allegiances of his colleagues — it’s all about playing it safe in the party room. And this tweet from Ken Wyatt last week does show that there are quite a few West Coast supporters in the party room, so it’s a good idea. 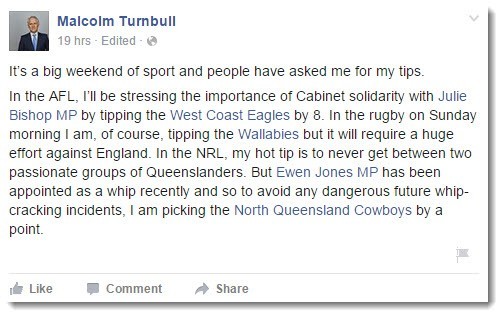 Ms Tips must admit that our knowledge of NRL is but a little, but even we know it seems strange to play a grand final between two Queensland clubs in Sydney. Considering how long Queensland has dominated State of Origin, though, maybe playing away won’t affect the performance of either of the clubs. Ms Tips thinks that the Cowboys are the ones to tip on Sunday — they’re Thurston for a victory.

Also on the topic of he NRL, a tipster has sent us this photo from Stanthorpe in Queensland, maybe there will be divine intervention: 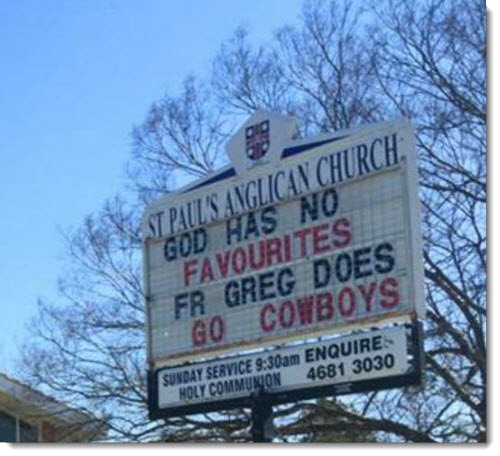 You get a prize, you get a prize. A tipster tells us a new morale-boosting effort at the ABC isn’t having the desired effect:

“ABC insiders are underwhelmed at the announcement by befuddled head of television Richard Finlayson that there will be in house awards for employee of the month and of the year. No one put their hand up for the first monthly award, and staff had to be dragooned into nominating this month. The annual awards, dubbed the BellBird and Playschool Prizes should be a real hoot.”

Colour us perplexed. But when it comes to staff morale boosting gone wrong, Bauer definitely takes the cake, announcing to staff that October is the “Month of Me”:

“With the start of October this week, we are pleased to announce our third annual wellbeing initiative for Bauer staff, Month of Me.

This year the Month of Me team will be coordinating a range of great opportunities including walks, challenges, cookbook sales  as well as special one-off events and offers to encourage you to focus on your own health and well-being and much, much more. This year you will all have an opportunity to put a sense of calm and clarity in your day by colouring.  Come and join a colouring group or just enter our colouring-in competition… come on, we know you want to!

The Month of Me is only for October so make the most of it!”

If only October is the Month of Me, does that mean the other 11 months of the year must be completely devoted to the company, with no calm or clarity?

Tips for young lawyers, and old? In a letter to the ASX yesterday, high-priced Sydney law firm Gilbert and Tobin revealed that it was acting for a company (called Thorpe Holdings, and associated with secretive US and European private equity giant KKR) that had raided the share register of Oz Minerals on Wednesday night and Thursday morning, snapping up a 10% stake.

“As a result of on-market purchases of OZL shares by Thorpe Holdings during normal trading on 29 and 30th of October 2015,” the letter explained. Oops, that’s either getting ahead of themselves, or perhaps Gilbert and Tobin can predict the future.

it looks good to see our PM as an ordinary bloke riding the tram but surely there are minders just out of the frame. What if I boarded the tram and wanted to sit next to him?

Ken – bloke reading the paper? No doubt security detail. Person taking the photo? Probable security detail. And of course, there will be an unmarked vehicle that will trail this tram just so…