The NSW Greens are proceeding with their plan to withhold funding from the federal campaign after Lee Rhiannon refused a federal peace offering to restore part of her former portfolio. 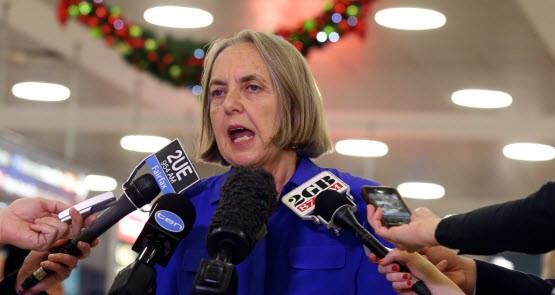 A fight is brewing between the New South Wales and federal branches of the Greens, with leader Richard Di Natale refusing to cave to the NSW branch’s demands that the education portfolio be returned to Senator Lee Rhiannon.

Last month, Crikey reported that the NSW branch of the Greens was threatening to pull its entire election campaign fund from the federal campaign after Rhiannon lost her portfolio responsibility for tertiary, technical, and further education to new Senator Robert Simms in a reshuffle. The Greens announced the decision in a post-party room briefing with journalists on the day Malcolm Turnbull was sworn in as Prime Minister.

Both Rhiannon and Simms — who replaced South Australian Senator Penny Wright towards the end of her term — are up for re-election at the next federal election. Rhiannon has had an extensive history in the education portfolio, and there is concern in the NSW branch that without a major portfolio, Rhiannon might struggle to retain her Senate spot at the next election. Di Natale’s office has argued that it is important to give Simms, who has a background in education at Flinders University and the National Tertiary Education Union (NTEU), a chance to retain his spot through a high-profile portfolio.

Crikey understands that the national council asked the Greens party room to review the decision to take the portfolio away from Rhiannon. It is understood that Di Natale declined to give the portfolio back to Rhiannon, but he proposed splitting the portfolio to give responsibility for TAFE issues to Rhiannon and let Simms keep the rest. This is similar to what has happened with the LGBTI portfolio, with Simms keeping the majority but Janet Rice maintaining responsibility for transgender issues.

But Rhiannon turned down the offer. She told Crikey in a statement that it was important for all higher education issues to remain together:

“A key message I  heard over the last four years from the sector was how important it was for higher education to encompass both universities and vocational education. The very strong feeling was that splitting the portfolio would risk downgrading vocational education and fracture a key policy area. As spokesperson, following consultation with students, staff and unions, I convinced my colleagues to modernise the portfolio by renaming it tertiary, technical and further education – to highlight it fully encompassed all aspects of post-secondary education.”

It is understood that the current fight over portfolio responsibility is part of a much larger battle between the New South Wales branch of the party and the broader party, but Rhiannon on Tuesday emailed all New South Wales party members calling for unity in the Greens:

Many of you would have recently seen media reports regarding my handing over of the higher education portfolio to incoming South Australian Senator Robert Simms.

I have been overwhelmed with the support and positive comments received from Greens members, supporters, students and staff regarding my work in the portfolio over the past four years.

Many Greens members in NSW are active in higher education campaigning and activism, either as students or staff, and they have expressed disappointment about the portfolio leaving NSW. Many people, both in and outside the Greens, had ownership over our higher education campaigns. Many people had a stake in it. Like so many other campaigns we Greens are active in, it was exciting grassroots organising. We will continue to campaign on education issues in NSW, as we always have.

With the strong possibility of an early election it is more important than ever that the party remain united and continue that grassroots organising. We have to work collaboratively and put forward our progressive vision for a just and sustainable society, particularly in the face of a re-energised Liberal-National government.

As the Greens lead Senate candidate for NSW I will continue to campaign on all key issues across the state, as well as continuing in my national roles as the Australian Greens spokesperson for democracy, local government, international development & aid, and animal welfare.

I look forward to campaigning with you over the coming months.

Di Natale’s office declined to comment, stating that party room discussions were confidential, and decisions for the NSW state council were their own.

Noone knows who the Greens spokespeople are on specific issues outside of the members of these arcane committees.

As one rusted on Labor hack said to me, “she’s your Kevin. Every party has to have one.”
Another six years? Seriously? NSW Greens, have the gumption to pick another candidate, and then you might keep that seat.

The reality is that The Greens became the refuge for a number of old Marxists including unreconstructed Stalinists and off with the Fairies Trotskyists, so this wouldn’t surprise any competent observer would it?

What is the Greens policy on higher education and vocational training. I have some interest in these sectors and I have no idea what their policies are.
Consequently I would say that Rhiannon should go and go quietly. She looks like just another seat warmer.