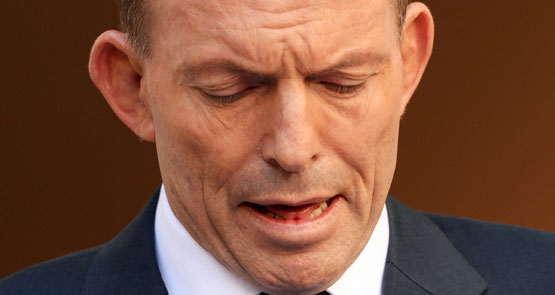 Like most everything about his prime ministership, Tony Abbott’s desire to be known as the “infrastructure prime minister” was a disaster.

In his farewell statement as prime minister, Abbott declared, in listing his achievements, “the biggest infrastructure program in our country’s history is underway”. At various stages, former Treasurer Joe Hockey boasted of an infrastructure program the size of eight Snowy Hydro schemes. But new data from the Australian Bureau of Statistics released yesterday showed infrastructure spending across Australia in the June quarter slumping to its lowest level since late 2006 in seasonally adjusted terms, and just 75% of the level of the last full quarter of the Labor era in June 2013.

The June 2015 result caps a significant decline in public infrastructure spending under Abbott. Infrastructure work done for the public sector by both the private and public sector itself has been consistently below the levels the government inherited from Labor, even ignoring the surges in spending during the financial crisis stimulus package. 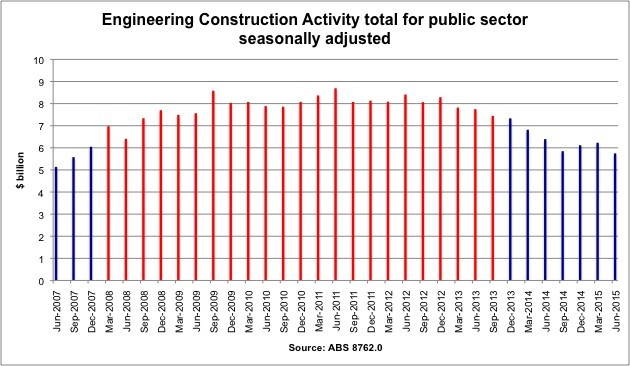 As we’ve noted before, there have been calls from both the Reserve Bank and the International Monetary Fund for Australia to develop a long-term “pipeline” of major projects backed by rigorous analysis. While the Abbott government purported to enhance the independence of Infrastructure Australia, its approach to infrastructure was constrained by politics and Abbott’s own personal view that infrastructure meant roads, even road projects that would actually waste money, like the Melbourne East West Link. One of Malcolm Turnbull’s first substantial policy shifts from the Abbott era was to profess the government agnostic about transport modes when it came to infrastructure funding, and the appointment of Jamie Briggs as Minister for Cities and the Built Environment signals a very different approach to the Coalition tradition of using Commonwealth funding exclusively for regional infrastructure.

The only bright spot in yesterday’s figures was that infrastructure spending in Western Australia, where the end of the mining investment boom has hit hardest, lifted by 8%, albeit not to anywhere near previous levels. But spending in Queensland continues to fall, and is now down to nearly half the levels of late 2013. The Commonwealth’s apparent unwillingness to match its rhetoric with actual dollars — most of the projects “announced” by Transport Minister Warren Truss in the last two years have been reheated Labor projects — means that the ongoing net fall in private infrastructure investment isn’t anywhere close to being matched by additional government spending.

Today there was probably the best example yet of the Coalition re-announcing Labor infrastructure projects. Territories and Local Government Minister Paul Fletcher gave an “exclusive” to The Australian about “greater use of technology to improve the flow of vehicles” on major roads. According to Fletcher, “if you have got a choice ­between allocating capital to building a new road or building new lanes or allocating capital to information technology that allows an existing road to be used more ­efficiently, then it’s worth understanding what the choice is,” and that he would be he would seeking “early advice from his department about what work had been done on this issue here”.

Fletcher’s right about the benefits of road IT: relatively small investments in traffic management IT can yield huge benefits. How do we know? Because Labor put over $60 million into a trial of “Managed Motorways” in 2011, and Infrastructure Australia undertook detailed assessments of individual projects and found huge benefit:cost ratios in 2013. So Fletcher will find plenty of detail about projects ready to go when he seeks his advice.

Only problem is … the Abbott government cut all the funding in the 2014-15 budget, so Fletcher will have to find the money from scratch. He might need some “early advice” on that, too. This is one reheat that might take a very long time in the microwave, Minister.

He didn’t mean “Defenestration Prime Minister” did he?

Rudd’s NBN, a quality communications network, would have earned Abbott the title had he not been the eternal wrecker of good Labor policy.

Abbott kicked an own goal and is now remembered for nothing constructive.

It’s becoming apparent as more information is released about rAbbott’s time as leader that with one or two exceptions, he had more success with failures.

Fun as it is to kick the Abbotrocity’s corpse before it gets all squelchy, we should not think we’ve emerged into any sunlit uplands.
Listening to Malcontent with FranK on RN this morning was like trying to extricate oneself from cold molasses.
Almost made Stumblegums seem preferable.
Almost.

Interesting analysis, but not a lot of support to the data. There is a considerable lag between approving a project and the eventual spending, so I believe the premise of the article is flawed.
I’m not sure if there would be a different outcome, but you really need to look at the projects value of the projects approved rather than the spending.