Peeling back the layers on Bill Shorten. 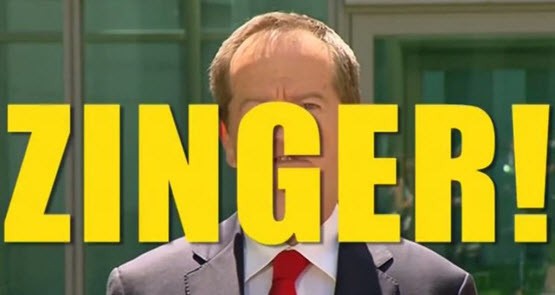 Author and journalist David Marr, one of this country’s finest writers, has penned a Quarterly Essay on Bill Shorten entitled “Faction Man, Bill Shorten’s Path to Power”. Like all his other Quarterly Essays — on Kevin Rudd, George Pell and Tony Abbott — it’s a superb read. Last night he discussed it with journalist Julia Baird at Gleebooks in Sydney’s Glebe.

Asked what advice he would give Opposition Leader Bill Shorten, Marr didn’t hesitate: “Find in public some of the sharp good humour that you show in private. Stop looking like a visitor in the world that you are trying to dominate. Stand up straight and occupy the space, show your steel and find the words.”

The former union leader has an unfortunate wish to be seen to be a good boy, Marr says. “But in my view he would be more respected if he could show the mongrel in the man. I think he would be much more likable if we could see the claws.”

In the essay, he tackles Shorten’s most unfortunate habit, that of sounding wooden and scripted — a vocal tic beautifully satirised by television comedian Shaun Micallef in a segment entitled “Bill’s Zingers”. In his show, Mad As Hell, Micallef sends up Shorten’s laboured and not-very-funny statements, like: “We have got a Minister for Education who is doing more texting than Shane Warne.”

But Marr said last night that when Shorten spoke from the heart, as in his budget replies, or in his farewell to Tony Abbott on the floor of Parliament, he could be very eloquent.

In the essay, Marr says Shorten does have a good sense of humour. When Micallef thought that the show might win a Logie award, he asked Shorten to record an acceptance video. The politician agreed, and, in the video, he holds a Logie, saying: “Thank you. I’m going to keep this for myself. I don’t see why I should give it to Shaun Micallef. After all, I’ve been writing half his material.” (Mad As Hell lost to The Voice).

One of Shorten’s most marked characteristics is his capacity for making a deal, Marr says. In the essay, he writes:

“Ahead of Shorten lies a challenge he’s never faced before; an absolutely open contest. Each step of the way until now has been won by deals, faction plays and the occasional walkover. He’s as tough a backroom fighter as federal politics has turned up in a long time. A Shorten speciality is a brutal backroom contest that hands him a public victory ‘unopposed’. He is the member for one of the safest Labor seats in the country. He was the first leader of his party to win his position in a ballot. But that was not open either; 86 members of caucus had as much say as — and outvoted — 30,000 rank and file members of the party. Now Bill Shorten faces the nation.”

Shorten’s family circumstances are common to many politicians, Marr writes.

“Shorten is one of that interesting pack of politicians born of determined mothers and largely absent fathers. There are so many: Barack Obama, Bill Clinton and Tony Blair are distinguished alumni. Among recent Labor leaders in Australia are Rudd, Albanese and Shorten. Among the qualities these men share are self-discipline, boundless ambition and an appetite for approval on a national scale.”

The former union leader told Marr that one of his heroes was Napoleon. “Over coffee he cites the Corsican’s maxim; find your enemy’s weakest point and concentrate your attack there. That would be Tony Abbott.”

Asked about Shorten and Abbott’s Catholicism, Marr says that although they were both educated by the Jesuits, the most progressive Catholic order, they had different experiences. “As the Shorten boys arrived at Xavier [College], Tony Abbott was leaving Riverview, its sister school in Sydney, as a committed warrior in Bob Santamaria’s fight against the Red Menace and the collapse of Western civilisation. But Xavier was a different place. The school wasn’t fighting the modern world tooth and nail. Vatican 2 was accepted.”

In the essay, Marr mentions that Shorten married his second wife, Chloe Bryce, in an Anglican church. On a practical level, he was pleased to find someone who would marry two divorcees. But also philosophically he had become estranged from the Catholic Church’s teachings on IVF and reproduction, blended families, homosexuality and marriage equality, he said. But Shorten is a big fan of the new Pope.

Another strong theme in “Faction Man” is betrayal.

“All his life Shorten has left behind people who feel betrayed by him. He denies casting people off when they are no longer of any use. He insists he keeps in touch, even now, with old campaigners from university and the union. But there have been so many new best friends over the years. ‘You can’t keep in touch with everyone’, he says. ‘I get that there is disappointment amongst some people. They look at me and say, well, he’s here and I’m there, and what happened?’ Many he’s dazzled and dumped understand. They recognise that the intimacies formed in political brawls are intense but may not outlast the campaign.”

Ultimately, however, Shorten “stands for nothing brave,” Marr said. On issues such as metadata retention, the stripping of citizenship and national security, he’s supported the Coalition, instead of defending principles of “lawfulness, decency and civilisation”.

In the essay, Marr writes that his subject “represents no challenge to capitalism”:

“He is AWU not CFMEU. Since he birched Latham a decade ago for veering too far left, Shorten has stuck to the middle ground. His politics are blue-collar conservative. If he is proposing policies now that were fringe back then — like marriage equality and renewable energy — it’s not because he has shifted. They have moved to the centre, where he has always been standing. He has no radical designs, no great plans for reform. His goal is power for Labor and Bill Shorten, and decent administration for Australia.”

Highlight of the night was an audience member who said that he had never agreed with much of what Marr wrote and had taken the train to last night’s talk with low expectations. “I was wrong,” he told Marr, adding that he’d enjoyed the discussion. For an author, there can be no higher praise.

Bill, give us a vision to make us want Labor.

Of course, in his bio of Abbott, and on episodes of QandA, Marr said Tony Abbott would surprise us all, and be a PM much more to the left/in the labor mood than we’d expect. He’s a great writer, but after that doozy I’m not sure why he’s being given such unquestioned credibility across the press for his character assessments.

Bill Shorten is like most other people – complex and not easy to analyse. Marr is entitled to his point of view, but IMHO Shorten will be a better administrator of the country’s fortunes and government than either Rudd or Turnbull.
Sometimes the quiet achiever is preferrable to the megaphone who says a lot, but doesn’t ‘get things done’!/:

A good PM does not need to be charismatic – as long as he/she is not toxic and holds as closely to the truth as a politician is capable.

Since ‘dealing’ his way to the leadership, as the Abbotrocity thrashed & crashed about, all gumBoil Shlernt has only needed to do to seem prefereable is not fall out of chair. Does anyone – apart from his great-great granny CML – think he’ll have a hope of survival now?