Should Turnbull fear a Bernardi party?

There have long been suggestions that Cory Bernardi might defect to Family First, but might he start a completely new party by cleaving off the Coalition's hard-right conservatives? 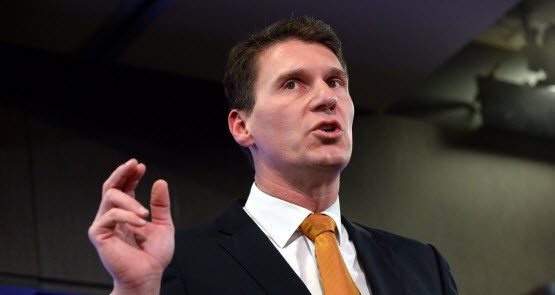 Faced with life under the impeccably liberal Malcolm Turnbull, conservatives have lost confidence in a Liberal Party they had hitherto assumed to be leading them into a golden age; so much so that there have even been suggestions of a permanent split. Would arch conservatives really be better off outside the tent, and, if so, how badly would the Liberal Party miss them?

How did talk of a new party come about?

Among the many things conservative pundit Andrew Bolt had to say about the leadership change was warming to a suggestion, made spontaneously during an appearance on the Ten Network’s The Project, that South Australian Senator Cory Bernardi could emerge at the head of a breakaway party. Speaking shortly afterwards on Bolt’s own program, Bernardi warned that alternative parties would indeed emerge if the Liberal Party failed to reflect “the views of the silent majority”, although he denied having any plans of his own. Bernardi had proved himself an awkward fit for the Liberal Party even when Tony Abbott was leader, having resigned from a shadow parliamentary secretary position in 2012 after Abbott criticised his assertion that same-sex marriage would lead to polygamy and bestiality.

If he goes, will there be trouble?

There have long been suggestions that Cory Bernardi might defect to Family First, but that party’s narrow concern with family values might not be an ideal fit for a talk-radio constituency that is more concerned with climate scepticism and a hard line on immigration. Pragmatists in the Liberal Party might well take a benign view of a new party coming along to poach that segment of its base, as it would then be free to pursue the middle path followed by David Cameron in Britain and John Key in New Zealand. Any lost votes would presumably flow straight back as preferences, at least in the lower house. It would also diminish the base of internal opposition to Malcolm Turnbull, and any moderates who might succeed him, and the attendant threat of destabilisation.

If he stays, will it be double?

Arch conservatives may have resolved to keep their heads down for the time being, but new strains will surely emerge as suitably contentious issues rise to the top of the agenda. So long as Bernardi and his ilk are seen to be marginalised, this need not cause the Liberal Party too much harm. John Howard once described the party as a “broad church” that accommodated classical liberal and conservative tendencies, and said it was “at its best when it balances and blends those two traditions”. Certainly the Tony Abbott experiment has suggested that the conservative tendency has the potential to cause electoral damage if it is not kept in check, but that could equally be said of the party’s free-market liberal strain — as Turnbull may yet discover if he turns his mind to industrial relations reforms of the kind favoured by the party’s key backers.

Why might a “broad church” be thought preferable to the Westboro Baptist variety?

The most interesting questions raised by Cory Bernardi and others who sit on the ideological fringes of major political parties are often overlooked. They relate to the structure of the political system and the incentives they create for those seeking to advance their agendas. Democracies in the English-speaking world are typically founded on the principle of majority rule, which encourages diverse interests to present a united front to as broad a range of voters as possible. This is in contrast to the proportional representation systems typical of continental Europe, which give parties the freedom to carve out a distinctive ideological niche.

A case in point is Britain’s Labour Party, which in the space of a decade has been led by both Tony Blair and Jeremy Corbyn. Corbyn’s recent rise to the leadership has prompted fears of a split, but the party has been here before: in 1981, when a leftist ascendancy caused centrist rebels to form the Social Democratic Party. Under Britain’s single-member electoral system, the principal achievement of this party was to increase the size of Margaret Thatcher’s majorities. Such concerns are mitigated in Australia by preferential voting, but competing parties of the centre right and right would still have the effect of diluting the energies of the anti-Labor cause.

So does talk of a new conservative party simply amount to hot-headed fringe-dwellers blowing off steam?

Possibly, but if conservatives lose too many battles in the war for the soul of the Liberal Party, they will be increasingly attracted to the idea of a hard-edged party of the right as a counterweight to the Greens in the Senate. But here too, incentives are shaped by the electoral system, the future of which is an unknown quantity. The existing Senate system famously provides opportunities for new parties to get a foot in the door through preference-harvesting, but that’s unlikely to offer much encouragement to a new conservative party.

Micro-party beneficiaries of preference-harvesting tend to be ideologically innocuous, as they are best placed to gather preferences from both ends of the spectrum. A more polarising party with a reasonable base of support could actually find Senate reform to its advantage, as it would presently stand to lose out from preference snowballers as much as anyone else. This is exactly the situation faced by the Greens, who are enthusiastic advocates for reform. In any case, it would make sense for any prospective Liberal Party splitter to know what rules they will be playing under before deciding whether to jump ship.

Happy to be corrected, but I would have thought Bernardi was an awkward fit for Family First anyway, given that party’s links to Evangelical and Apostolic Christian groups. I don’t think you should underestimate their antipathy to Catholicism, even if it’s expressed in Bernardi’s pungent terms.

I think that the conservative wing of the Liberal Party is much better at working the machinery of the party than it is at winning elections. So the best they can hope for is to put one of their own in the Lodge and then work hard to stop him (for it will inevitably be a him) shifting too far to the centre.

Should they suffer the misfortune of getting a committed conservative into the leadership, the result would be, well, we’ve just seen the result. Howard best demonstrated the sort of leadership the right can cope with – a sense that he is one of their own but who must be allowed to reach out to the centre in order to be effective.

The real problem the conservatives have got is that they think they are the suppository (love that!!) of truth with God on their side. So they can’t compromise and can’t win the centre.

They are reduced to clever procedural internal manoeuvres such as ambushing pro marriage equality MPs on the first day back from the winter recess. On one level, this was a success in that they believe the plebiscite will fail (Get praying everyone) but a failure in that I’m sure it convinced a few more undecided MPs that Abbott was incapable of reaching for the centre and would lose the 2016 election.

To call people with their minds rusted on to the 19th century ‘conservatives’ is simply bad English. The proper word to describe them, is ‘reactionaries’.

“Speaking shortly afterwards on Bolt’s own program…“?!? Did you mean the four hours a week, Mon-Thurs, tongue bath on the Poison Dwarf Price’s prog on 2GB?
Funnily enough, twice in the last week, once with Rat Hately & again with the Hobbesean (nasty, brutish & short) Price, Blot decried any suggestion of having a radio show of his own – the abysmal failure of the Melbourne talk station (?name?) being uppermost in his mind.
If only enough people could right to Borey Carnadi’s blog and encourage him to form a Falangist party, the body politic might be spared his irksome presence for ever.
On facial features alone, not to mention the creationism, Hastie Tasty in Canning would be an ideal recruit as its Defence Minister

Corgi Bernadi is not Santa..