If Turnbull really is committed to open government, there are some concrete steps he can take. 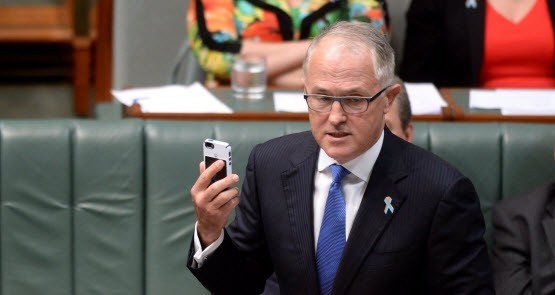 If Prime Minister Malcolm Turnbull is committed to open and transparent government, as he claims to be, there will be a number of Abbott-era changes he will have to wind back in order to make it a reality.

As part of his ascension to the top job, Turnbull decided to bring responsibility for public data policy into the Department of Prime Minister and Cabinet. It is expected much of the work for this will be conducted by the Digital Transformation Office, Turnbull’s pet project while he was communications minister to transform the way the government deals with the public. One of his major undertakings while he held the Communications portfolio was to begin to make more government data — like raw data sets around geospatial data, finance, energy and infrastructure data — available to the public.

In his speech announcing he would be challenging Tony Abbott for the leadership of the Liberal Party, Turnbull said Australia needed “an open government”, but Turnbull has been advocating open access to data in government for much longer.

“The current Australian government’s principles on open public sector information state that open access should be our default position,” Turnbull said in a speech in 2014.

The principles state that the Australian government should make data available to the public provided there is “no legal need” to protect the information. But the Abbott government threw up many legal barriers to accessing information that is in the public interest, and attempted to make it harder to access information through freedom of information processes.

By the end of Abbott’s reign, the phrase “on-water matters” became a joke, catch-all phrase for the government seeking to avoid transparency at any cost, but it was a pattern of behaviour that began with the government’s “tough on borders” approach to stop reporting on boat arrivals in Australia and give the illusion that the “boats had stopped”. It extended to the government’s information blackout on everything happening in offshore immigration detention centres, and more broadly to national security reporting. Most recently the government has made it tougher for whistleblowers to report issues in detention centres without facing jail time.

At the same time, the government has attempted to make it much tougher for journalists, or members of the public, to be able to access information through the freedom of information process. Legislation introduced without warning last year would shut down the Office of the Australian Information Commissioner (OAIC), set up by the Rudd government in 2010, with many of its functions to be passed on to other Commonwealth bodies. The legislation has yet to pass.

When a citizen is unable to get the information she wants out of a department through a freedom of information request, for example, under the current system, she would be able to go to the Freedom of Information Commissioner in the OAIC and request a review for free. Under the new proposal, she would need to go to the Administrative Appeals Tribunal and pay an application fee of over $800.

The 2010 changes to FOI were already improving the way freedom of information requests are used. In his last annual report before leaving the role, FOI commissioner James Popple noted that between 2009-10 and 2013-14 the number of FOI requests made to Australian government agencies or ministers jumped from 21,587 to 28,463, and over the four years there was a 108.9% increase in FOI requests that weren’t related to someone’s own personal information.

Use of the review process also boomed by 376.4% over the four years, as a result of people not having to pay the fee to the AAT to have their reviews examined.

The government’s decision to shut down the OAIC came out of the blue. The most recent examination of the FOI process — the Allan Hawke review in 2013 — made a number of recommendations around fees for processing FOI applications, including a $400 review fee, but did not call for the office to be shut down. In an interview with The Guardian Australia yesterday, former information commissioner John McMillan said no one in government had ever explained where the idea had come from to abolish the office.

The idea could have potentially come from bow-tie fan and former head of the Attorney-General’s Department Roger Wilkins. In an interview with Crikey‘s sister publication The Mandarin last year, Wilkins said he didn’t see the need for all these additional oversight bodies when an ombudsman would be enough:

“I’ve always advocated for a robust ombudsman. An ombudsman deals with maladministration — it should be where these issues are dealt with. The presumption should be that if people have a complaint about the way in which the public service has behaved, go to the ombudsman.

“I don’t know why we need all these other mechanisms. It seems to me that the ombudsman has been a successful mechanism around the world, and I’m not sure why we need everything else.”

The legislation to make FOI requests harder has sat dormant in the Senate since last year, and there is little support from Labor, the Greens or the crossbench for the OAIC shut down. It created a practical problem for the government because the OAIC was not given funding in the 2014-15 budget as it was due to be shut down. In the 2015-2016 budget, the government threw the office a lifeline in the form of $1.7 million in funding until the legislation could pass. The office went down from 23 staff to just 11, and McMillan and Popple left, with all responsibility for the OAIC now falling to Privacy Commissioner Timothy Pilgrim.

Now under Turnbull, and with Wilkins gone from the Attorney-General’s Department, there is hope for a new approach for FOI.

Peter Timmins, a lawyer with decades of experience in the field of freedom of information law, told Crikey that in addition to abandoning plans to shut down the OAIC, he would like to see Turnbull do a complete overhaul of the Freedom of Information Act. The act was first written in 1982 by the Fraser government, and while the changes in 2010 did add some new aspects to the law, it still includes language that predates the internet era and the technology revolution Turnbull often cites. Matters such as record keeping for services such as Skype, Slack, or Turnbull’s favourite, Wickr, have not been properly considered as part of how the government should retain information.

Timmins has also suggested that FOI should move from the Attorney-General’s Department into PM&C, with Turnbull to take it away from just being “lawyers’ business” and become truly about the information.

Freedom of Information’s place under the AGD has presented challenges in the past. When Crikey began seeking to get a freedom of information decision by Brandis’ office reviewed by the OAIC, it was mentioned that there could potentially be a conflict of interest given the OAIC reports to Brandis’ office.

Turnbull might be receptive to change on open information. Timmins spoke to Turnbull in July about the situation, and wrote to Turnbull calling for an overhaul of the act:

“The Act reflects the times when the Fraser government introduced it for example providing access to documents not information, with antiquated provisions that refer to computers as we thought about them in the 1980s. There is no mention of data sets (contracts, grants and much else) in the limited pro-active publication requirements, let alone machine readable formats.”

Turnbull, at the time, said he would go through the information provided and report back, but has not said anything on the matter since.

When asked, a spokesperson for Brandis would not confirm whether the government still intended to proceed with plans to shut down the OAIC.

“The government is committed to transparent, accountable and open government. The OAIC continues to operate and its privacy functions continue to be funded on an ongoing basis. Additional resources were also provided to the OAIC for the continued exercise of FOI functions in 2015-16,” the spokesperson said in a statement.

The Australian government was also invited by then-US secretary of state Hillary Clinton to join the Open Government Partnership in 2011. As of 2015, Australia still hasn’t signed on. In a brief published under freedom of information, the government, as of October last year, was still considering whether to join the 65 countries already committing to open, accountable government.

Your metadata fair game, but Brandis’ own off limits

My recent experience was instructive. I sought a copy of the text of the agreement of 8 August 2014 between Australia, Belgium, the Netherlands and Ukraine that the results of the investigation into MH17 would not be published unless all parties to the agreement agreed. That gave Ukraine, as the prime suspect, an effective veto. My initial request was to DFAT. They passed it to the AG’s office who in turn passed it to the AFP. They refuse tho release the document. I sought review from the Commissioner who upheld the AFP on the grounds that its release would “affect foreign relations”. Foreign relations with whom was unspecified, but Ukraine and the US would be at the head of most lists.
I was told that I could go to the Tribunal, but that it would cost me more than $800 in a filing fee. I can’t afford that. As the media still refuse to even discuss the existence of the agreement, let alone press for its release, that particular sorry chapter in Australia’s history will remain a secret. This is not the only example of such suppression with the MH17 inquiry, but it makes the point.

JO’N makes the point that, I think, that one reason why the number of FoI requests increased is because governments – no matter the stripe – are so determined to keep the electorate in the dark no matter what the issue.
It is the nature of autocracy.

He’s like a Marvel comic book character..”The Splayner” all he needs to do is splayn things better.. early election..you bet you are..

I’d hope, Josh, that at least you can understand Turnbull’s belief stated in a speech in 2014 that “open access should be our default position,” does NOT mean there’d be open access on EVERY occasion?
We should be thankful it doesn’t mean that, shouldn’t we, even if many of Crikey Land Denizens can’t understand.