It would appear the Murdochs have become one of the first families in the world to extract more than $1 billion in salary benefits from public companies. 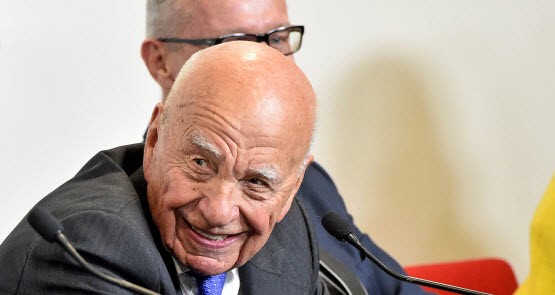 A few weeks before Rupert Murdoch’s 2014 AGMs of 21st Century Fox and News Corp, Crikey published this story documenting how Murdoch family salaries had cracked A$600 million over the past 16 years.

The data is irrefutable, but amidst an unprecedented crackdown on questions and debate at last year’s AGMs in Los Angeles, Rupert did issue a confused half-denial of this story, which wasn’t able to be followed up.

With another year of figures now belatedly in the public arena, it is quite easy to re-cut the pay data and come up with a much bigger headline number.

Courtesy of the weaker Australian dollar, and when measured in 2015 dollars, it now looks pretty clear that the Murdoch family has helped itself to more than A$1 billion in salaries.

And these figures are only going to get larger now that Lachlan Murdoch is back on the payroll as an well-paid Fox executive, just like his younger brother, James.

The precise Murdoch family salary figures since 1998-89 are US$522 million, and that breaks down as follows:

With the Australian dollar tumbling to just 70 US cents and the Murdochs getting paid in US dollars, this total figure of US$522 million over the past 17 years converts to A$745 million.

Factor in the time value of money and seven-figure salary packages that Rupert also pocketed before 1998-99 and it would appear the Murdochs have become one of the first families in the world to extract more than $1 billion in salary benefits from public companies.

And with a net worth of more than $10 billion, they don’t exactly need the dollars, but if anything their salaries are only going to go up in 2015-16.

After Lachlan Murdoch’s return as an executive was announced earlier this year, 21st Century Fox released this regulatory filing explaining the new identical salary deals for Lachlan and his younger brother, James. The key disclosure is as follows:

“Each Executive (James and Lachlan) will receive a base salary of $3,000,000 and will be eligible to receive an annual bonus with a target of no less than $8,000,000 and a maximum payout of no less than $16,000,000. Each Executive will participate in the Company’s long-term incentive performance stock unit program (the ‘PSU Bonus’) and be eligible to receive for each fiscal year a PSU Bonus with a target of no less than $9,000,000 (the ‘PSU Target Value’). The maximum opportunity for such PSU Bonus (the ‘PSU Maximum Opportunity’) shall be no greater than 150% of the PSU Target Number.”

That sounds like a minimum of US$20 million each for the boys, so the Murdoch family are headed for a record salary haul from Fox and News Corp of close to A$100 million in 2015-16, especially if the Australian dollar remains weak.

Shareholders wishing to complain about this can head to the 21st Century Fox AGM at Fox Studios in Los Angeles on November 12. As usual, registration will take place in a nearby parking lot as Rupert continues his tradition of trying to discourage shareholders from attending.

It was quite convenient last year having the Fox and News Corp AGMs on consecutive days in Los Angeles, but this year they are appropriately being treated as completely separate companies with News Corp shareholders gathering earlier in New York on October 14.

The Fox proxy statement was finally released yesterday and the delay probably reflected the difficult negotiations with aggressive hedge fund ValueAct Capital, which has now scored its founder Jeffrey Ubben a seat on the Fox board after agreeing not to buy any more shares or criticise the company.

Interestingly, there are no shareholder resolutions at Fox this year seeking to separate the chair and CEO role, or unwind the Murdoch family’s undemocratic gerrymander, which gives them close to 40% of the votes when they only own about 14% of the stock.

It’s a different story at News Corp, where the proxy statement reveals another shareholder resolution to unwind the gerrymander.

A similar resolution went close to prevailing at last year’s AGM after traditionally supportive Saudi billionaire Prince al-Waleed bin Talal’s sold most of his 6.6% voting stake before the AGM to institutions that voted against Rupert’s wishes.

It may be another close-run thing this year, although the vote is only advisory so success wouldn’t formally enfranchise the 70% of News Corp shares that currently don’t get a vote.

What’s the opposite of Schadenfreude?

Would people really be interested in the income of the Murdochs? Would really anybody envy them?
Rupert was driven all his life by the obsession to out do his father. The price he paid for achieving his ambition was very high. First of all he had to pay for it with his self respect. Whether or not he has been involved in illegal activities, is irrelevant – he certainly violated all definitions of decency and morality in setting himself up as a demagogue to peddle his brain washing of a large number of people by appealing to intolerance and prejudice. Above all, he deeply hurt his mother, a lady loved and admired by all.
Sorry, Rupert. You can buy a lot of things with your millions, but happiness is not one of them.

Not to mention the $882million he managed to squeeze out of Australian taxpayers in 2014.. the sooner his “jawbone” flatlines the better..

So Murdoch is filthy rich – so what? He can show his bank statements to the whole world but does anyone actually respect him as a human being?