Canada definitely does not want to become the United States -- but is it ready to return to liberal government? 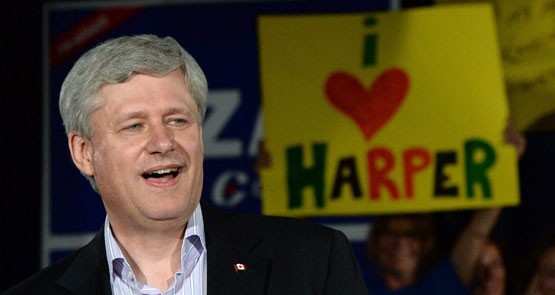 “This is the first three-way horse race we’ve had in years. We’re loving it.” In the BBQ-Bar, downtown Windsor, just across the river from Detroit, Jon is filling me in on the Canadian election. He’s co-publisher of the Windsor Independent, Windsor’s alternative paper, done in the standard style — Letraset layout, retro graphics, head shop ads, Dan Savage-esque sex column — and co-organiser of its hipster quadrant (Walkerville) festival. He’s one of those guys: hip but savvy, a journo but a business head, focused on making this mid-size town get to the front rank.

He’s also, in past weeks, become consumed by the country’s epic election, an 11-week slugathon, in which Conservative Prime Minister Stephen Harper is trying for a fourth term, to cap off his decade in power. “That’s a long shot.” Jon is no fan of Harper’s policy or record, and in that, he’s with the majority of Canadians east of the Great Lakes. But he’s fascinated by the man himself, and in that, too, he is in the majority. Harper has dominated Canadian politics since the early 2000s, and the Canadian political imagination as well. He’s set himself against what Jon calls “the Laurentian elite”, the well-connected upper-middle classes from Toronto up the St Lawrence River to Montreal and Quebec, whom Harper has scorned as the rulers of “a north European socialist state that doesn’t work, and they don’t care that it doesn’t”.

But he’s been stymied for most of his decade in power by lack of a majority. This time around, coming off terrible polling, he and the Conservatives are going for broke — they could either gain a slim majority and push forward, or they could fall to third-party status and be irrelevant for years. “So it’s hard fought,” says Jon. “Have you heard about this thing about the niqab? Do you know this countryman of yours named Lynton Crosby?” Oh, Canada.

More about Crosby in a moment, but first here’s why the Canadian election is so improbably interesting: Canada, like Australia, is a new world society that adopted the Westminster system, on independence. Unlike us, it never abandoned the first-past-the-post system, and so parties have risen and fallen spectacularly over the last 30 years. This time around, third runner, the New Democratic Party (a late labour party offshoot from the Liberals), has come into lead or second place, while the Liberals, dominant for decades, fell to as low as 18% and worked their way back to the high 20s. “Then,” says Jon, “the once-socialist NDP really moved to the centre, and became budget balancers, and the Liberals moved to the left — they want to run deficits to create a recovery. So it’s anyone’s race.”

Indeed, it’s a little more complex than that. Watching one of the debates a couple of nights ago — there are seven of them, two in French (can we have that please, how good would that be, to watch Bill Shorten speak French for an hour?) — it’s clear the Liberals have a more complex approach. They want to sign the Trans-Pacific Partnership and other free-trade agreements and rebuild the economy — Harper’s greatest problem being a terrible economic record, deflating the economy as the resources boom ran out. That is essentially a way round the protectionist/globalist impasse the left finds itself in, because it acknowledges that being part of such global deals may be necessary, but that homegrown social policy can then fill the gap created by dislocation, with new jobs, training, infrastructure, etc.

But Harper is a master politician and so six weeks in, he started on a different tack, when the courts struck down an arbitrary law that had said all women wearing niqabs must remove them for citizenship ceremonies. The law had been challenged by one such woman, and the ruling was a godsend. Harper has run with it ever since, making it an issue of national identity, demanding that the opposition parties commit to changing the law properly, etc, etc. “This was two days after Lynton Crosby arrived,” said Jon laughing. “It’s the — what does he call it?” “The dead cat on the table,” I said, wearily. “The dead cat on the table!” Has it worked? Of course it has. The issue was a nightmare for NDP leader Tom Mulcair. Agreeing and getting it off the table would have driven some of his social leftish voters to the Liberals. But taking a firm line against it, which he has, is costing him votes in Quebec, an NDP stronghold.

“Harper is … you’ve got to give the guy credit,” Jon says. “He’s from the elite, was a liberal, quit uni after two months and went west, to Edmonton, and worked in a mail room. From there he got into politics. He’s an outsider.” He is, to a degree, but less than he likes to project. The mail room, after all, was in the oil company of which his father was a senior accountant. But it’s true that Harper made a conscious choice to reject the eastern establishment, and to adopt the more right-wing, individualistic way characteristic of the Canadian west (save for Commie love-nest Vancouver).

He’s an odd-bod, Harper, with the same mix of social-conservatism and economic liberalism as a Tony Abbott, yet with an ease of manner that makes him far more beguiling. With a full head of prematurely grey hair, often going tieless, Greens-style, he looks like a man who owns a mid-sized inner-city digital design studio. Much of his initial appeal was as a problem-solver — someone to cut through the country’s inherited rusty statism and entrenched conservatism. But to stay in power he’s had to use every trick in the book — including proroguing Parliament to head off a no-confidence vote. That and economic malaise has finished him with many of the people once willing to give him a go.

Could he get back in? He could, he could. Because, well — “Why the 11-week election campaign?” Jon smiles. “Ah, well, according to the Fair Voting Act brought in by Harper, if the campaign is longer than four weeks, the spending limits increase pro rata. So he can spend three times what he would on advertising. And he’s barely spent any of it yet. Gotta go. Come to the festival,” he says handing me a pass to the festival, on that weekend, a craft brew, indie bookstore, if-it’s-all-right-with-you-palooza.

But Jon and many others represent Harper’s dilemma right there. They want a more entrepreneurial, less elitist Canada, but they don’t want Harper’s starry-eyed version of a US-style Canada. Why would they? This is Windsor, after all — a place with a vibrant downtown, state reinvestment, buses every 10 minutes, $30 walk-in medical clinics, and a crime rate so low it went nearly two-and-a-half years without a homicide in the 2000s. Detroit, across the river, is a smoking ruin, hollowed out, with marooned communities, no streetlights, and 300 murders a year. Dead cats on the table, dead cat bounce, the niqab striptease — that is all the right has to offer now. We know this, but its rare to see it so starkly illustrated as it is by the two realms either side of this border.

With a genuine 3 horse race this could be interesting. The conservatives are leading in the polls and will probably come out with the most seats after the election but not a majority, in the end the result will most likely be a Liberal-NDP government, that of course depends on how well Bloc Quebecois can poll in Quebec and how many seats they can take off the NDP, that could very much stymie their cause similar to what the SNP did to the Labour stronghold of Scotland in Britain. Although there is much animosity between the mainstream left and the separatist left like the Labor-Green relationship in Australia, the NDP and the Liberals may just need to suck it up and form government with BQ due to their mutual disdain of the Conservatives.

He’s an odd-bod, Harper, with the same mix of social-conservatism and economic liberalism as a Tony Abbott, yet with an ease of manner that makes him far more beguiling……could be describing Turnbull..

While the details differ, The Cannadians like the Australians are not blinkered but completely blindfolded. Anybody to the left of Harper/Abbott is called that dirty word, a ‘socialist’.
The Capitalist v. Socialist argument is old hat – they haggled about the distribution of goods. While all our friends have been asleep, the radical change has been missed. Today, the problem is not the distribution of goods, but THE NATURE AND QUANTITY of the goods themselves, with the trouble being caused by the decadent, profligate, out of control consumerism.
All of us, including our politicos, must come to understand, that the only solution to prevent the threatened turning of our small planet into a half dead global garbage dump, is a total change in outlook and way of life. Finagling with economics will not save us.

“how good would that be, to watch Bill Shorten speak French for an hour?”
I’d settle for hearing him try English, rather than the verbless MBA mush that he pushes forth – it can’t be called speaking as he clearly neither knows nor cares what it might mean as long as the sounds he’s learnt by rote come out in vaguely the right order.
Harper’s demise would help restore Canada’s once high national reputation – trashed, like ours by truly vicious dog whistled policies on clmiate, social cohesion, moral content by the same ilk for the same tawdry reasons, power without glory.