Scott Morrison might be in for a rude shock: his plan to return to surplus via economic growth fits poorly with Australia's current growth prospects, Bernard Keane and Glenn Dyer write. 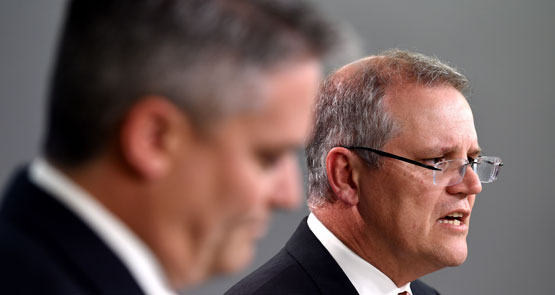 While it’s understandable that newish Treasurer Scott Morrison would be using the same script as his ill-fated predecessor Joe Hockey until he’s mastered his brief, his stint so far is raising real questions about fiscal policy under a Turnbull government. And the latest news from the International Monetary Fund suggests his approach is going to create more problems, not solve them.

Morrison has already made waves with his Hockeyesque mantra that Australia has a spending problem, not a revenue problem. And he’s persisting with the Abbott strategy that tax policy must be a battleground with Labor, in which Labor is incessantly portrayed as the party of higher taxes while the Coalition wants to be more responsible with spending.

Morrison is more correct on spending — and to his credit he’s pulled back from incessantly blaming Labor for it. The budget papers, which assume all the government’s spending and savings measures are passed, show that, at 25.9% of GDP, government payments in 2014-15 and this year will be higher than any year under Labor except the 2009-10 GFC stimulus year. Morrison has already suggested, in fact, they will go over 26%. The Coalition in its current form is a party both of higher taxes and higher spending than Labor.

Morrison’s solution for the path back to surplus — while pretending his is the party of lower taxes — is to talk about higher economic growth. “When you grow income, you grow revenue,” he said yesterday. That’s correct in and of itself, but unhelpful in Australia’s current circumstances. The budget already assumes a return to trend (and above) growth over the forward estimates — 2.75% this year, 3.25% next year, and then projections of 3.5% beyond that. Those assumptions were criticised as heroic the moment the budget was released (Treasury’s 3.5% projection looks particularly wishful thinking). The case for regarding them as too optimistic has only strengthened since then. In particular, the Reserve Bank has repeatedly mused about whether Australia faces a lower rate of growth than we’re used to, one closer to 2% than 3%.

That has obvious implications for employment, but also for fiscal policy, given lower growth will mean lower revenue — however heretical the idea of a revenue problem might seem to Morrison. And the Reserve Bank’s concerns were reinforced yesterday by a paper from the International Monetary Fund detailing the impacts on economic growth of commodities-reliant countries like Australia of lower commodity prices. The paper suggests over the next two years lower prices could shave between 1%-2.25% off annual GDP growth. And there’s a threat to Morrison’s plans that is the same as the one Wayne Swan struggled with in trying and failing to return to surplus: low nominal growth. The budget forecast nominal growth of just 1.5% for 2014-15, but that’s forecast to shoot back to 3.25% this year and over 5% in 2016-17. But so long as inflation remains very low, then nominal growth will stumble on at current levels or lower, adding further pressure to the budget.

Given all that, it’s important to remember how inexperienced Morrison is: he has only been in politics since 2007 and only been a minister for two years — and those two years were characterised by the Abbott obsession with mindless slogans and denial of basic facts. It’s unsurprising that Morrison is still habituated to that style of slogan-led policy. But as the Hockey experience shows, the treasurer’s words and performance can affect the economy by making consumers gloomy and business worried even when the underlying economy is much stronger than the doom and gloom merchants (the like of Goldman Sachs and Citigroup) are willing to admit. Sloganeering — Morrison’s already got his own, “work, save invest” — might be a quick way for Morrison to undermine his own strategy.

Meantime, his boss has sought to kick-start the economic reform process by calling a snap summit of key stakeholders. In one moment, Turnbull has shown more creativity on economics than we saw from Abbott or Hockey at any time since Hockey proposed his one good idea in opposition, a financial services inquiry. Which, by the way, we’re still waiting for Morrison to release the government response to: Hockey was on the verge of releasing it when Abbott was knifed. Morrison also has the Harper competition review response (which is a lot more than just the effects test) to produce. Well thought-out government responses to both reports will be a key moment for Morrison to establish his bona fides as a proper reformist treasurer rather than one merely committed to looking after the government’s mates, which was the Abbott way.

And Turnbull has already sent a big signal to the business community by not renewing Maurice Newman’s role as head of the PM’s Business Advisory Council. Newman is a climate sceptic of the hard right with little to offer on the economy. That tells us that Turnbull is open to advice from all sectors of business — another message Morrison and his ideologically rigid Treasury secretary John Fraser might do well to heed.

“Hockey was on the verge of releasing it when Abbott was knifed.”

Enough of the “knifed”. Abbott was not knifed or assassinated. Neither was Rudd. Their egos might have been terribly wounded but that was because both were over-inflated by their sense of self-importance.

Just when you need a Martin Parkinson!!!!

Morrison’s new slogan should be – “Budget surplus? Where the bloody hell are you?”

Anyone talking about “growing the economy” in the face of our gigantic private debt load and impending mining boom collapse needs to be institutionalised.

Turnbull would do well to get rid of Fraser next.