Private Media's CEO leaves the building. Plus other media tidbits of the day.

Kibsgaard departs as Private Media ditches CEO role. The CEO of Crikey parent company Private Media leaves the building at the end of the week, company chair and owner Eric Beecher announced to staff in an email yesterday afternoon.

Jason Kibsgaard, who replaced former CEO Marina Go in June last year, was the third CEO for the company since 2012, when Amanda Gome left the company after disagreements with Beecher and the board over strategic direction.

Kibsgaard will not be replaced — the plan is for each publication to operate with a publisher responsible for commercial development. These publishers will report directly to Beecher and the board. Beecher says he plans to be more directly involved in the business. “Private Media has to change to succeed,” he wrote in his email to staff. “We have to become leaner and more agile, move faster and draw on the creativity and insights of everyone. We must be open and transparent at every level about our strategy, tactics and numbers.”

Kibsgaard joined the company in early 2014 as chief operating officer after several years in executive roles at ad agencies. During his tenure the company launched The Mandarin, led by publisher Tom Burton. But in recent months, Kibsgaard has focused aggressively on helping the company reduce costs — a process that appears to be continuing.

At a recent staff meeting, Beecher said three years ago the company had developed aggressive expansion plans, which necessitated the introduction of a corporate layer to help drive revenue growth. Faced with declining ad rates in the online advertising market and the rapid pace of technological change in the media industry, revenue grew, but not as quickly as the company’s cost structure. In recent months, Beecher told staff, the company had been focusing on reducing its costs to the level they had been several years ago.

This year Private Media has sold off several of its mastheads. Property Observer has been spun off by its founding editor Jonathan Chancellor, and Daily Review, which was founded as Crikey’s arts portal, was taken over from Private Media by its editor Ray Gill. — Myriam Robin

Bishop’s companion. Since Julie Bishop started stepping out in public with Melbourne property developer David Panton last year, the media has oscillated between the formal “partner” and “boyfriend” to describe him. After he was snapped sitting next to Bishop at the UN yesterday, today’s media coverage has him in the limelight once again. News Corp and AAP have tended to stick to “partner”, while at Fairfax and outlets like the Daily Mail, “boyfriend” has been the go …

Mercer’s shit list. Yesterday Crikey’s Tips and Rumours column noted PR flack Lyall Mercer’s tendency to not co-operate with the ABC on investigations into asylum seeker conditions on Nauru — Mercer represents the Nauruan government (as well as groups like Hillsong and the Queensland LNP) and has numerous times told the ABC’s Hayden Cooper to to piss off. “Due to continued unbalanced and inaccurate coverage of Nauru by the ABC we will not respond to this request,” he was quoted as saying on 7.30 on Monday — and it wasn’t the first time.

But Cooper isn’t alone in drawing Mercer’s ire — one doesn’t even have to send in media questions to earn it. Several months ago, The Guardian Australia’s Paul Farrell (sarcastically) tweeted: “Lyall must be busy preparing his next fact filled release”. He got the following emailed response from Mercer:

I though your public tweet — ‘@LyallMercer Lyall must be busy preparing his next fact filled release’ — was inappropriate. The clear sarcasm reflects on your objectivity and balance, both essential to good journalism.

I acknowledge that the Guardian has an obvious perspective about issues but I thought this went too far. The Government of Nauru — like all governments, companies and organisations who are featured in the media, deserve the right to communicate their points of view, and their views are as valid as those who have opposing viewpoints.

If you prefer we don’t send you the ‘facts’ from the perspective of the Government we’d be happy to oblige.

Regards Lyall Mercer On behalf of the Government of Nauru”

Ubben v Murdoch.The Murdochs’ 21st Century Fox announced a “standstill agreement” with ValueAct Capital’s Jeff Ubben (one of the more aggressive hedge fund value managers) overnight that will keep his stake in Fox to 7%, and stop him agitating for change in Fox’s business strategies, or even threaten the Murdoch clan’s control of Fox. There really is nothing like spending more than US$3.7 billion buying B-class voting shares in a Murdoch company to get the clan’s attention.

The announcement overnight from 21st Century Fox baldly stated that the company’s board would be expanded from 12 to 13 to allow Ubben to be nominated to the company’s board of directors. They certainly wouldn’t be as accommodating for Crikey founder Stephen Mayne. The Fox filing with the SEC says Ubben will remain a director of the company while ValueAct owns 5% or more of Fox. If it falls below that level, he will have to leave the board.

ValueAct has previously won board representation at companies including Microsoft, where it helped remove Steve Ballmer as CEO, and Willis, where Ubben helped create the insurance group’s merger with Towers Watson. Besides News, ValueAct also has stakes in Rolls Royce, Adobe and American Express. Ubben is seen as a supporter of Fox’s newish CEO James Murdoch, and ValueAct is likely to support James’ moves for Fox to have a more aggressive strategy for distributing TV shows directly to consumers or through Hulu, the streaming service it owns jointly with Disney and Comcast. Fox has tried to buy control of Hulu, but its partners have said no. — Glenn Dyer

Pursuit is part of a marketing campaign for the university conducted by McCann Melbourne. The website will be updated daily, with all content published under a creative commons licence.

The University of Melbourne also funds (and houses) The Conversation, which seems similar in style. But it looks like Pursuit will be far more closely tied to the university — it’s housed within the university’s main website and features Melbourne branding prominently. — Myriam Robin

Musical chairs. Speaking of new gigs, former Bulletin editor John Lehmann is The Australian’s new deputy editor, replacing Peter Fray, who’s off to UTS. Since 2013, Lehmann has been editor-at-large of The Daily Telegraph. He’ll be replaced in that role by Nick Tabakoff, who recently rejoined News Corp after a stint at the Commonwealth Bank. He was the Oz’s media editor before that. — Myriam Robin

Front page of the day. Yes, yes they do. 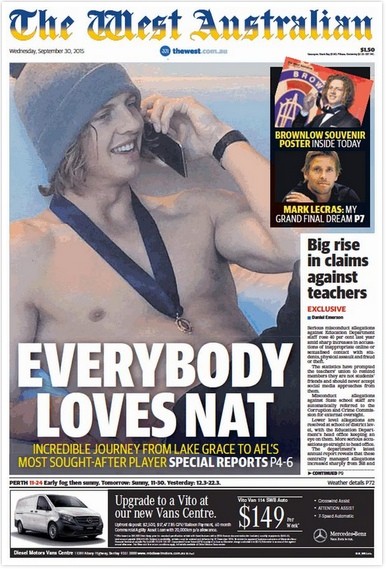 Media briefs: <em>Tele</em> interviews a juror … Fox gets a new constituency … PVO all day every day …

I’ve always considered “boyfriend” and “girlfriend” a teenage type of thing. Presumably Fairfax and the Daily Mail are trying to make the relationship sound a bit trashy and light-weight.

Kibsgaard departs … I’m pretty ignorant of corporate structures, but I was impressed by the idea of abolishing the position of CEO. I don’t know this one (or indeed any others), but it struck me as an idea that many other companies might explore. There are many millions of dollars per position to be saved here, and man some of those characters are pointless, visionless parasites.

I seem to be missing the logic behind Lyall Mercer’s dummy spit(s).

“The Government of Nauru — like all governments, companies and organisations who are featured in the media, deserve the right to communicate their points of view, and their views are as valid as those who have opposing viewpoints. ”

Somehow seems to translate to:
Because we don’t like your viewpoint (or consider it to be unbalanced) we will stop giving you enough information to actually write a balanced report….