Along with the Biebs, Malcolm Turnbull's women cabinet ministers also made a splash.

With the dust settling on the new Prime Minister and his ministry, former PM Tony Abbott snuck in the odd “snipe” during his chat/therapy session with Ray Hadley on 2GB, claiming that the “sacrifice” of his chief of staff Peta Credlin or former treasurer Joe Hockey would have made no difference to those “with ambition”.

Turnbull spent his second week as PM announcing $100 million to help address domestic violence, joined by Minister for Women and Employment Minister Michaelia Cash, up six places this week into sixth, who also hinted that convicted abuser and US singer Chris Brown might not be allowed into the country for his upcoming tour; a hint that Immigration Minister Peter Dutton was quick to take up. Cash also discussed workplace reforms, specifically removing penalty rates, describing them as outdated and a deterrent to weekend work, but acknowledging any changes would probably be taken to the next election (an election! How quaint!).

As debate rages at the UN about Russia’s support for the Assad regime in Syria, and how to bring any form of peace to the embattled country, Foreign Minister Julie Bishop came in third this week after she announced a timeline for a bid for a non-permanent seat on the Security Council. Bishop also responded to New Zealand PM John Key after he said over 200 New Zealanders have been detained or deported since Australia’s new immigration laws were enacted last December.

Health Minister Sussan Ley has jumped up 18 places this week as the Medicare review from yesteryear rears its head, but this time no co-payment is in sight, instead focusing on the Medicare Benefits Schedule and unnecessary treatments and tests. Environment Minister Greg Hunt said he “killed” the idea of a review into the Bureau of Meteorology under Abbott’s government and that the government may invest in wind farm technology as well as emerging renewable technologies.

New South Wales Premier Mike Baird, back in our index after a brief break thanks to a new Federal ministry, has been busy at Australia’s first shark summit, concentrating on protecting surfers and swimmers. 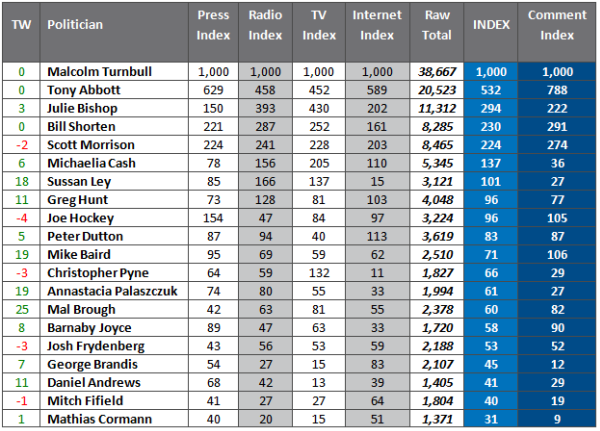 Further evidence of dust settling as Turnbull and Abbott see a drastic reduction in mentions on social, although, to be fair, Justin Bieber is in town …

… And, of course, we are all caller Chris on 2SM last week, who swears he predicted a one-term Tony and has decided his next prediction will be the return of Kim Beazley.

A regular week for the Biebs, with over 1 million mentions on social media (worldwide) and enjoying the Australian sun, I’m sure, while he gives fans tips on how not to annoy him too much. Thanks, Biebs! 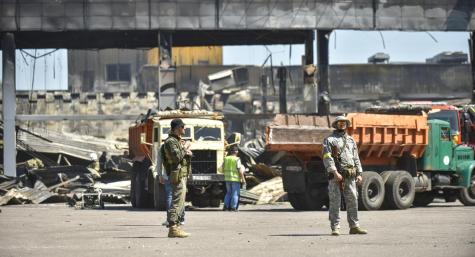