PR comments are for those on Team Australia. When you want ask the Nauruan government for a media comment (say, a response to reports aired on 7.30 last night of rape and sexual abuse of asylum seekers on Nauru), you get the country’s Australian PR flack, Lyall Mercer. And if you work for the ABC, it turns out you get nothing at all. Mercer replied to ABC journo Hayden Cooper’s questions with an email that said: “Due to continued unbalanced and inaccurate coverage of Nauru by the ABC we will not respond to this request.”

“We can only assume that the ABC does not wish to report the facts and that political activism has replaced ethical journalism, therefore we will not be cooperating on this occasion,” Mercer said.

It’s not the first time Mercer has butted heads with Cooper, telling the journo earlier this year “How dare you ask questions like this? We will be making an official complaint to the ABC. Do not contact us again.”

So who is this Australian who acts as a gatekeeper to the Nauruan government?

Mercer is based in Brisbane and runs his own public relations company, where his clients include the Nauruan government, the Hillsong Church and the Queensland Liberal National Party. Mercer’s Twitter account is now private, but he’s previously used the platform to berate journalists who reported on Nauru. In 2012, Mercer was paid by Channel Nine’s A Current Affair to organise an interview with the wife of convicted murderer Max Sica.

While Mercer’s tweets are private, the Republic of Nauru account seemed to respond to the story overnight and this morning: 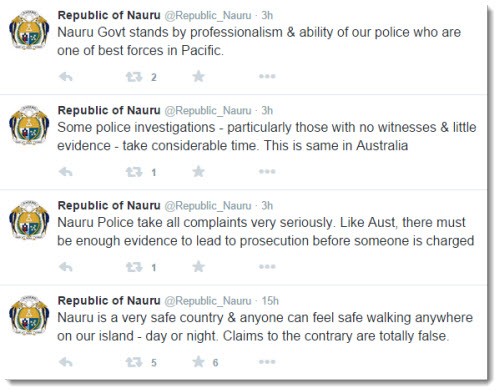 This account has also previously criticised the ABC, saying “they hate balance”.

The Australian press is already severely limited in its ability to report on what happens in detention centres — access to the centres is impossible, and staff who speak to journalists face jail time under the new Border Force Act.

Hush your lady mouths. More on the story Crikey broke yesterday about American anti-choice extremist Troy Newman, who has written about the need to execute abortion providers and how women who have abortion are murderers. An enraged Right To Life Australia yesterday fired off a media release accusing Crikey of lying about Newman (and misusing the word “refute”), but it failed to identify where we’d said anything incorrect or dispute our account of Newman’s extraordinarily vile writings. The story prompted Labor’s Terri Butler to write to Immigration Minister (and abortion opponent) Peter Dutton saying she was “concerned that Mr Newman’s presence in Australia will cause significant harm to our community” and asking that cancellation of his visa be considered. That prompted Right To Life to launch an attack on … not Butler, but ALP women’s group Emily’s List, during the course of which the group compared abortion to live export slaughter. And in the course of our interview with Right To Life’s Katrina Haller yesterday, we twice asked her whether she thought calling for the execution of abortion doctors might encourage extremists or the mentally ill to engage in violence. She ducked the question both times.

Party time at AGNSW? We have previously reported on the way staff and volunteers are increasingly disgruntled and disillusioned with management at the Art Gallery of New South Wales, with a tipster now telling us:

“The last couple of weeks has seen the Gallery spend funds which were donated to the Gallery’s Foundation being spent on staff farewells — I’m wondering if the ATO is aware of this? The rest of the redundancies are due to finish at the Gallery on 15 October. There are no curators left at the Gallery’s as they have all been made redundant. So sad for those that care about art and culture! Particularly concerning to Foundation benefactors is the fact that funds donated are being diverted from their purpose – to acquire works of art for the collection – to day to day staff expenses. If the gallery has an income problem, a clean breast should be made of this and fund raising can be conducted for this purpose.”

We asked the gallery if it was spending donated funds on staff farewells, but were told “there have been no recent redundancies announced nor recent farewells for staff made redundant,” and that it was incorrect that there would be no more curators at the gallery.

Dob in a mate. Yesterday we reported that the new Australian Border Force restrictions for employees would also apply to external contractors for the department. Now we hear from a tipster who knows one such contractor at a tech company:

“They’ve all been given forms to sign where they must confess any and all drugs they take or have taken. They are also expected to name everyone they know who they ‘suspect’ of smoking marijuana or taking other drugs.”

A department spokesperson got back to us yesterday, confirming the tip was correct:

“Measures in the Integrity Framework include random and targeted drug and alcohol testing, mandatory reporting of serious misconduct or criminal behaviour and integrity testing. The Integrity Framework applies to ‘Immigration and Border Protection’ (IBP) workers, who are employees, contractors and service providers who have access to Departmental premises, information, assets and systems.

“The implementation of the Integrity Framework is established through a range of mechanisms which can differ depending on the employment relationship. Elements of the Integrity Framework are being implemented on a risk basis, and the Department will work with service providers. Where service providers already have drug and alcohol testing programs in place the Department would not ordinarily seek to duplicate testing.”

Now we wonder how much of a risk it is if external tech workers may have smoked dope once?

Ask me anything, but not that. US presidential candidate Hillary Clinton took part in a Facebook Q & A last night, and while she took the time to answer questions about how much she loves her granddaughter (a lot) and how young people can change the world, there were still quite a few questions from journalists left unanswered: 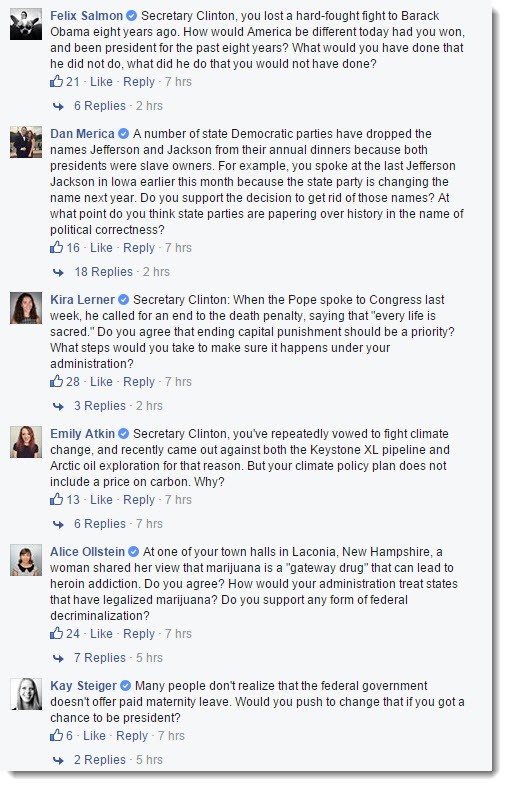 So Crikey ‘broke’ the Troy Newman story. Silly me, I read about it in a Medianet presser yesterday morning. Tut Tut.

The world, and amerika, dodged a bullet when Clinton lost so I think the answer to [email protected] would be – dead in the water, or close as makes no difference.
Never mind the morons getting off their lard arses to vote for the Donald – if Clinton snaffles it the Benighted States will drag the rest of us down with it.