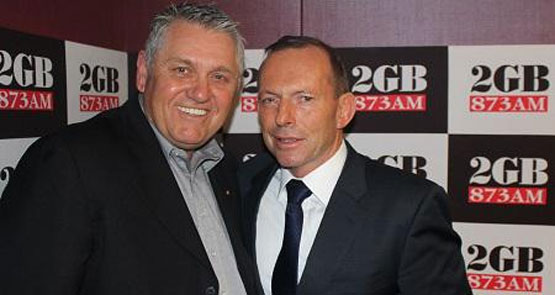 When Treasurer Scott Morrison turned up for an interview with 2GB’s Ray Hadley after the leadership change he wore a hard hat for protection, but former prime minister Tony Abbott was in dire need of a towel after the sponge bath he received at Hadley’s gentle hands.

When Abbott lost the leadership two weeks ago, he said there would be “no wrecking, no undermining, and no sniping” of Prime Minister Malcolm Turnbull. Since then, the member for Warringah has only spoken to his preferred media outlets: The Australian, The Daily Telegraph, and today, 2GB. While Hadley asked Morrison to swear on a Bible during a combative interview in which Morrison used the passive-aggressive “mate” around 18 times in 18 minutes, the mood in 2GB’s studio for Tony Abbott’s first radio interview since losing his job was much more somber and conciliatory. Hadley first asked the former prime minister “Are you OK?”

“Yes I am, Ray, and thank you for your concern. I always knew that politics was a pretty brutal business. It’s a game of snakes and ladders and yes I’ve hit a snake. It’s a bruising business to lose the prime ministership but on the other hand it’s a tremendous honour to have the prime ministership and I could probably dwell on some bad things if I wanted to but I would rather focus on the privilege, the honour, of being the PM of this great country for two years.”

It didn’t take long for Abbott to slip back into the old language of “stopping the boats” and talk of pink batts. There was not a mention of any death cult. And while not directly attacking his former ministers, Abbott has made a number of comments that will be perfect fodder for Labor in the run-up to the next federal election. Most of the I-can’t-believe-it-isn’t-sniping was directed at Morrison, who denies Abbott’s claims that the then-social services minister had warned his office about Turnbull’s plans to challenge for the leadership on the Friday before the spill.

“Certainly there was a conversation as I understand it between Scott and [Abbott’s chief of staff] Peta Credlin. He’s obviously put one construction on the conversation, my office put a different construction on the conversation. It’s probably a bit counterproductive to revisit all of this now, the last thing I want, Ray, to come out of this interview is a headline ‘Abbott slams Morrison’ because I think you’re going to get — I’d rather focus on the good work that Scott did first of all as minister for immigration and border protection and then as minister for social services.”

Abbott said Morrison was a strong minister, and he would “have a conversation” with Morrison to resolve the issue at some point in the future:

He did, however, get into it when it came to changing the party’s leader without a substantial deviation in policy:

“It’s very important that Liberal members of Parliament stick with the leader and sure there’ll be difficult times, sure there’ll be ups and downs, but people of character and steadiness don’t panic at the polls, they stick with good policy, and the interesting thing is that no policy has changed since the change of PM. Same-sex marriage, the same. Climate change, the same. Border protection policy, the same. National security policy, the same, and if you listen to the PM and the Treasurer, they’re even using exactly the same phrases that [former treasurer] Joe Hockey and I were using just a fortnight ago.”

In his first interviews and press conference last week, Morrison said Australia had a spending problem, not a revenue problem. The similarity between this and the lines run by Hockey and Abbott has already been highlighted by Labor. Abbott said these weren’t slogans but “resonant phrases”. Turnbull has said there will be changes in policy, but in order to appease the far right of his party, and the Nationals, he has committed to retaining much of the same policies as Abbott for the immediate term.

While there are hints of changes at the edges, such as getting rid of climate change sceptic Maurice Newman from the PM’s business advisory panel, Turnbull has announced no substantial changes to policy in the two weeks since coming into government. His first big announcement, of $100 million in funding for domestic violence counter-measures last week, were planned under the former prime minister. It was only that Turnbull’s language on domestic violence was a step up from what Abbott had used in the past.

The deposed leader could only bring himself to mention his successor’s name twice, and called for disillusioned Liberal voters who were so upset by the leadership change to back the new government, even if through “gritted teeth”, to avoid Labor winning the next election.

Abbott revealed that internal Liberal Party polling conducted the weekend before the Canning byelection, and two days before he was deposed, revealed that the Liberals were on track to win 57% of the two-party-preferred vote, as Liberal candidate Andrew Hastie ultimately did. Abbott reflected that he himself had “never been very popular”, but that hadn’t stopped the party winning government in 2013.

Abbott also, incorrectly, suggested the Coalition “effectively” won the 2010 election, but lost the negotiation. In fact, on the two-party-preferred vote, Labor technically won with 50.12% of the vote.

Sacrificing Hockey and Credlin, as many commentators have suggested, would not have saved Abbott’s leadership from those “hungry for advancement”, he said.

“This is a real myth. The idea that people who were hungry for advancement would somehow be mollified if Joe went or if my chief of staff went is just nonsense. When someone is absolutely focused on a particular objective, they’re not going to be put off if they’re thrown a few human sacrifices as it were and, frankly, it’s wrong to feed this particular beast.”

Abbott remains loyal to both Hockey and Credlin. He said he and Hockey were “absolute blood brothers” on economic policy, and for Credlin, “no one worked longer and harder for our success in opposition and in government than she did, and no one’s perfect”. Despite the “blood brothers” bond, though, Morrison has confirmed that Abbott had, in fact, offered to throw Hockey under the bus to save his own political skin.

While Hadley’s show after the interview was full of an outpouring of support and mourning for the loss of the conservative hero of the 2GB base, this is not Abbott’s swan song. There would be no byelection in Warringah this side of Christmas, and the former PM said he wouldn’t go gentle into that good night.

He said, at 57, he is still “reasonably vigorous” and still had something to contribute to public life.

Poor Tony, I guess he will just have to hug his huge parliamentary superannuation payout for solace if he retires… Or do a Rudd…. Abbott doesn’t strike me as the type to forgive easily…

I have two immediate reactions to this.

1. So Credlin was told of the move. Nothing more needs to be speculated. Morrison is right.

2. No change in policy? NO CHANGE IN POLICY?? There is one huge change in policy and that is a return to a government run through cabinet and not through the PMO. An immediate effect of such a policy change is an absence of captain’s calls, no presidential style announcements that cabinet ministers learn from the media and a shift towards asking permission rather than asking for forgiveness.

I would like the media to recognise this change in focus rather than giving air time to personalities and sensationalism.

I have no desire to hear anything more from Abbott at all, unless it’s his testimony before a future royal commission into abuses at offshore detention centres.

I agree with Xoanon.
Its quite sad and deluded isn’t it?

Agree with Xoanon, and I think thousands more would too.