Carly Fiorina narrowly escapes injury. And other media tidbits of the day.

Hadley to Bolt: you should do radio. While much of the media class has watched Andrew Bolt’s implosion over the end of Tony Abbott’s prime ministership with some interest, he’s been having a far more pleasant time palling around with Ray Hadley on 2GB these past two weeks. Last Saturday the 2GB Mornings host aired the second part of his profile interview with the News Corp columnist.

Here’s Bolt on the grief he’s caused News Corp over the years — it provides an interesting response to Stephen Mayne’s piece in Crikey on Friday:

“Rupert Murdoch has guts. He will back you … even if it costs advertising.

“Not many people who would tolerate the legal action to try and silence me. It all costs. It costs so much. And yet he’s done it, and he’s stuck with me. I feel a loyalty to him for his courage … that I wouldn’t give to many others. John Singleton is of the same cast — you cannot cow this bloke. People don’t realise that. Other organisations go to water on this stuff.

“People should realise … if it isn’t for the Murdochs or the Singletons, you wouldn’t hear alternative voices that the political and media class want to crush.

Towards the end of the chat, Ray Hadley asks Bolt if he’d consider going on radio full time. Bolt, who already does a show with Steve Price on Monday nights, responds:

“Yeah, at some stage. But until they pay me a Ray Hadley-sized salary, I can’t afford to drop the other gig.”

But he’d be so good at it, Hadley enthused. “You’re ready … and I think you could have a great impact. Andrew Bolt on radio would be a revelation. I’m not saying what you’re doing now isn’t important. But solo, mainstream …” Bolt promised to listen to Hadley and Alan Jones, to see what he could pick up.

“But I’ve never thought of myself in that position … I’m not into popular culture in a huge way, I didn’t grow up with it. I don’t feel like the every-man in any real sense. The fact that I’ve got where I’ve got is an astonishment to me.

“I used to be the guy who go to parties and think, what am I going to say that’s of remote interest to anybody? I’d stand in the corner near the piano … Now, 30 years later, people pay me … It’s bizarre!”

How’s this for punishment. Tonight on 2Day FM, three hours of mental health advocacy, as the station pays penance for the royal prank call. Instead of pulling the station off air for a time, ACMA mandated the special advert-free programming to air from 7pm. From the press release put out by Southern Cross Austereo:

“We will hear first-hand experiences of celebrities living with mental health challenges including TV host Osher Gunsberg, models Ashley Hart and Nick Bracks, performers Olly Murrs, Troy Sivan and Anja Nissen, and journalist Mia Freedman. Jules and Bianca will be joined by Federal Health Minister Sussan Ley to discuss the brutal statistics around self-harm and suicide amongst the current generation … Jules and Bianca will also speak with experts in mental health including Batyr founder, Sebastian Robertson, Mental Health Australia’s Chris Wagner and REACH Foundation’s CEO Trish Squires. Adding to this conversation is The Ethics Centre’s Dr Matthew Beard who will discuss ethics in the media, what really is “in the public’s interest”, and the basis of good decision making.”

Will it rate? We’ll never know for sure — radio ratings are far more finicky than those for TV. But the station is certainly making a go of it, partnering with Twitter to help spread the word. While it won’t make money off the three hours, surely the publicity can’t hurt. It’s donating air-time adverts to mental health charities and declaring the broadcast part of the launch festivities for national mental health month. — Myriam Robin

Content Creators of the World, Unite! Working in the content mines can be more difficult than you think. Writing for Pacific Standard, Colette Shade talks about the pressures outlets like Politico and BuzzFeed place on their journalists.

Free-to-air takeover. Despite falling viewing levels (the first two nights last week of the new US TV ratings season had a 20% slide in viewers in the key 18-to-49 age demographic), streaming video and the rapid rise of mobile advertising vehicles like Facebook, a contested takeover has emerged in free-to-air TV. Nexstar Broadcasting Group has offered to buy local television station owner Media General in an attempt to break up Media General’s recent agreement to buy Meredith Corp for US$2.4 billion.

Nexstar sent a letter overnight to Media General’s board offering US$14.50 in cash and shares for each share of Media General. That’s sharply lower than the US$17 a share offer rejected by Media General earlier this year without announcement. It values Media General at about US$1.85 billion, represents a premium of 30% over Media General’s closing price last Friday of US$11.15 a share. Including Media General’s debt, it is worth some US$4.1 billion.

Media General earlier this month said it agreed to buy magazine publisher and small local TV station owner, Meredith for about US$2.4 billion in cash and stock. Including debt, Nexstar told Media General that the Meredith deal was bad for its shareholders as it would once again expose them to print media — Media General sold most of its newspapers in 2012 to Warren Buffett’s Berkshire Media Group. — Glenn Dyer

Front page of the day. We couldn’t go past the SMH‘s pretty Mars front page. 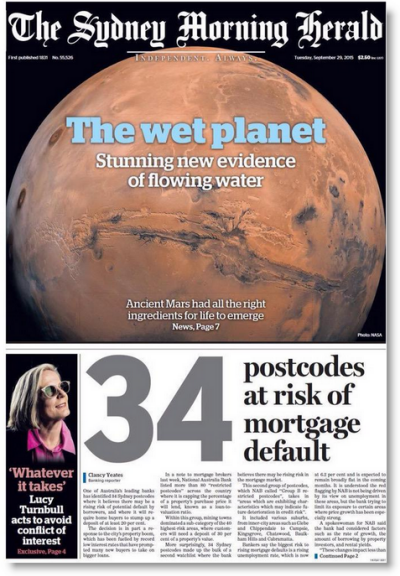 Video of the day. … which leads us to the question: 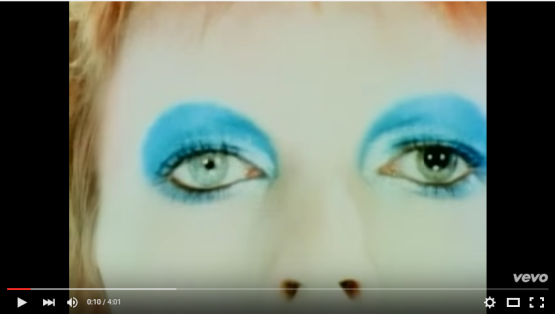 Hadley to Bolt: you should do radio 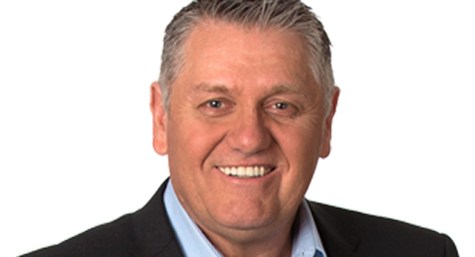 When is an ad not an ad?

Seems Hadley and Bolt have already forgotten Andrew Bolt’s failed stint on that right wing Melbourne talk-back radio station that went under in record time, and that I can’t even remember the name of now.

There’s probably more life on Mars than there is in Blot or Hardly’s heads.

Wot Saugoof pointed out and Blot does four (count ’em & weep) nights per week with the Poison Dwarf at HateCentral.
Like all vermin, Hately is probably accustomed to what he might pick up tongue bathing the likes of Blot & Morriscum.