The latest report on our opera companies shows a tragedy of Wagnerian proportions. 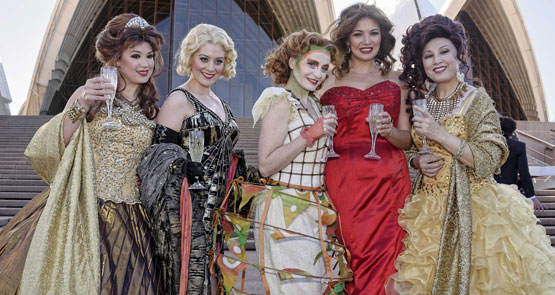 The federal government released the first report from its review of Australia’s funded opera companies on Friday afternoon. The paper shows an art form in deep trouble.

The review was announced by former arts minister George Brandis early in his term. It’s led by well-heeled company director Helen Nugent, who has long experience in the performing arts and chaired a similar review for the Howard government back in the late 1990s.

Nugent doesn’t mince words. Some of the explosive findings of the report include:

The report will be a wake-up call for new Arts Minister Mitch Fifield. It appears to suggest that at least major opera company, Opera Queensland, is effectively broke.

“Opera Queensland’s weak operating performance has led to a significant decline in its cash position, with its needing support from funding agencies to meet its cash flow requirements,” the paper states. “This situation is exacerbated by its having negative reserves.”

The discussion paper says that Opera Queensland is in deep trouble. It has negative net assets and is running a significant deficit:

“In 2013, the company’s liabilities exceeded its assets, producing a negative net asset position. This also translated into accumulated funds going negative in that year, despite a subordinated loan being in place. Therefore reserves were fully used up by 2013. This situation marginally worsened in 2014 as a result of the deficit that was incurred.”

Opera Queensland has recorded losses in each of the last six years, for a cumulative loss of $2.86 million in that time. Its ticket sales have declined 5% a year. Not surprisingly, the report discloses that Opera Queensland has had to ask for its grant funding “in advance” in order to “enable the company to meet its cash flow requirements”.

“Without the ongoing support of government, the company is unlikely to be able to meet its commitments when they fall due.”

But Opera Queensland is not the only company in trouble. Opera Australia, the nation’s largest publicly funded arts organisation, is also running a $2 million deficit and has struggled to make money from its main stage opera productions. Only the aggressive move into musicals in recent years is keeping the company afloat.

The report warns that “Opera Australia’s current position and cash flow situation is becoming increasingly critical”. Opera Australia is also receiving cash advances from the government: “For the past two years it has received a cash advance from the Australia Council against its funding for the following year.” Despite pulling in more government funding than the entire small-to-medium sector of the Australia Council, plus millions in corporate and private philanthropy, Opera Australia has $9.6 million more in liabilities than it has in assets.

The artistic side of the report also makes for depressing reading. Australia’s opera companies are struggling to get people to come and see their operas. Single ticket purchases in Sydney and Melbourne fell from 159,149 in 2009 to 113,846 in 2014, a decline of 6.5% a year.

Unfortunately, the musicals boom is not translating into new opera fans. While plenty of people are lining up to see Anything Goes and South Pacific, the report says that “this has not converted into significantly increased attendances at mainstage opera”.

Finally, opera appears to be artistically moribund. Fewer operas are being performed. New works are not being commissioned. And there are fewer opportunities for singers and other musicians: the number of principal and supporting roles has decreased, and “the number of principal singers employed on a full-time basis has reduced by 27 percent from 2011 to 2015”.

All in all, the discussion paper paints a picture of an art form in a death spiral. Australian audiences are turning away from opera, and the sector has responded by retrenchment, rather than innovation. New audiences could perhaps be won by bold new experiments and by finding new stars, but this is not happening. When Opera Queensland tried a whole season of new works in 2013, the company suffered crippling losses.

There are also fascinating broader implications for the cultural policy debate of the Opera Review. George Brandis’ Excellence Fund will take 28% of the Australia Council’s discretionary funding away from smaller companies and individual artists, while protecting the major performing arts companies.

But after reading the current discussion paper, many in the arts will ask whether opera continues to deserve its whopping subsidies. Despite a subsidy in excess of $190 per seat for the Western Australian Opera and Opera Queensland, public funding is clearly not delivering artistic vision, or a product that audiences want.

Should good money be thrown after bad?

Perhaps most explosively, the discussion paper also opens up the discussion of what should define a “major” company. Questions like this have been off the table throughout the current debate: companies cannot apply to join the Major Performing Arts companies, and none have ever been kicked off the team either. In Opera Queensland’s case, at the very last, questions about whether it should retain major status must now be asked.

Crikey approached Opera Queensland for comment. A spokesperson for the company told us:

“The company’s current circumstances means its cash flow position has to be carefully managed. The company’s tripartite funding agreement with the Queensland and federal governments allows the company to draw from approved future year’s funding to meet the current year’s cash flow requirements subject to the company continuing to meet its reporting obligations, ongoing close monitoring of budgets and projected programs and the condition of (annual) surplus results.”

Opera always was far too expensive. It is first and foremost extravagant, a means for the pretentious rich to pretend to be stinking rich. That is the point of sponsoring Opera, whether it is from the deep pocket of some vain autocrat from the 1700s trying to bankrupt himself, or some modern government trying to do the same.

If there is such a thing as an Arts Dollar, I vote for it to be spread over less demanding arts, while leaving this antique artform to pay its own way on door sales so steep that it services the need for posing rich people to pretend to be stinking rich. If there are not enough of them, well then bye-bye Puccini.

I agree with Roger Clifton again. If Australian governments must subsidise ‘opera’ it should subsidise modest contemporary companies to mount works written after the 19th century.

There is much better art to allocate the dollars to