The Australian anti-choice group Right To Life is sponsoring the tour of an advocate for the killing of abortion providers. 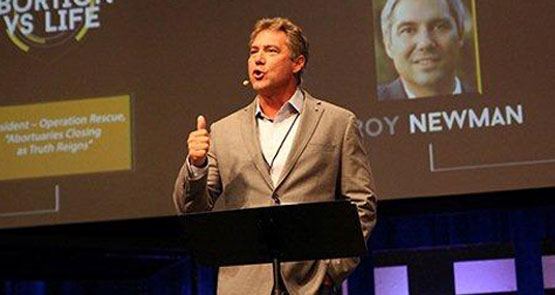 A prominent US anti-choice extremist who has publicly called for the execution of abortion providers and who advocates harassment of abortion clinics will shortly tour Australia at the invitation of anti-choice group Right To Life.

Troy Newman, head of the the group Operation Rescue, will, according to a media release from Right To Life, speak in Melbourne, Sydney, Hobart, Brisbane and Cairns and “will be giving some impetus to the campaign in Victoria against the push to create a huge ‘bubble zone’ around” abortion clinics (Right To Life calls them “abortuaries”). A bill introduced by Sex Party MP Fiona Patten is currently before Victorian Parliament to establish exclusion zones around abortion clinics to prevent staff and clients from being harassed and abused by anti-choice campaigners. An Essential Research poll in July found majority support for the proposal.

Newman is a long-term anti-choice campaigner and is the co-author of Their Blood Cries Out, published in 2000 and updated in 2003. In it, Newman argues that abortion providers should be executed:

“In addition to our personal guilt in abortion, the United States government has abrogated its responsibility to properly deal with the blood-guilty. This responsibility rightly involves executing convicted murderers, including abortionists, for their crimes in order to expunge bloodguilt from the land and people. Instead, the act of abortion has been elevated to a ‘God-given right’ and the abortionists canonized as saints. Consequently, the entire nation has the blood-red stain of the lives of the innocent upon its head.”

Newman also compares women who have abortions to murderers:

“Why, then, do we consider any differently the women who seek to hire killers to murder their pre-born children? Why the hesitancy to say that not only the mothers, but also the fathers who willfully abort their babies, are guilty of murder?”

In fact, one of Newman’s chapters is called “Moms Who Murder”. He goes on to argue “the argument can logically be made that abortion is a sacrifice to demons” and that terrorist attacks, school shootings and AIDS are God’s punishment for abortion.

In a follow-up book published by a far-right vanity press, Newman and his co-author Cheryl Sullenger urged anti-choice campaigners to find out as much information about abortion providers as they can and make it public, and to learn (including through freedom of information laws) and publish details of any companies providing goods or services to abortion clinics, including photographing vehicles and patients. Newman and Sullenger boast of circulating photos of Kansas doctor George Tiller and a patient. Tiller was murdered by an anti-choice campaigner in 2009.

In 2001, a security guard outside a Melbourne abortion clinic was murdered by a Christian terrorist planning to slaughter everyone inside the clinic.

Newman has helped fund a recent smear campaign directed at Planned Parenthood in the US by a group called the Center for Medical Progress. The campaign, involving secret videos, has been used by Republican politicians to try to stop funding for Planned Parenthood on the basis that it sells aborted baby parts for profit. The claims have been repeatedly discredited.

Right To Life’s Dr Katrina Haller said Newman had only recently come to the group’s attention, via the Planned Parenthood controversy. In response to Crikey‘s questions she appeared unfamiliar with Their Blood Cries Out, although she was aware of Newman’s link to Tiller’s clinic. She says Right To Life believes abortion providers are guilty of homicide and ideally should be charged with murder, but Right To Life strongly opposes the death penalty. “We believe in the sanctity of life, which begins at fertilisation, and we certainly don’t advocate the killing of anybody,” she said. “They have a different culture in America where some states have the death penalty. We’d like abortion providers to stop providing abortions and start caring for women and children.”

I wonder if the government has been asked to stop this person’s visa as they did with US rapper Chris Brown?

I know I’m being simplistic but isn’t this promoting terrorism?

So Chris Brown has been denied a Visa, how about this Pyscho?