Australia should follow the Chinese President's visit to the United States very closely. 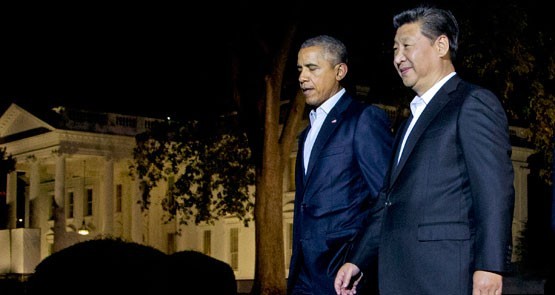 As Chinese leader Xi Jinping begins his official state visit to the United States this week there are a raft of big-ticket items on the agenda, and Australia is caught up in most of them.

There’s the economy (stupid), China’s rampaging military build-up, the intensifying technology battle between the two sides — both overt and covert — and, in something of a stunning piece of timing, Pope Francis is in town (in Washington) at the same time on Xi’s first visit.

Only six months ago China was eyeing the summit (at least in its own mind) as an opportunity to stitch up its much-coveted G2 — the new special different kind of relationship it craves. Its ascendant leader, all-powerful Xi Jinping, was readying to eclipse American lame duck President Barack Obama.

Since then Obama as finally started kicking goals — Cuba, healthcare, marriage equality and of course the US economy — as China has faltered.

And Xi has been fighting ongoing faction battles with the Communist Party, a fight made more difficult by his ongoing anti-corruption campaign, which has fractured his aura of invincibility. China has also kicked some own goals — building islands in the middle of mainly empty seas, closer to Hawaii than Beijing, amped-up repression of anyone and everyone it doesn’t like.

As a consequence, the Obama administration has abandoned its almost timid attempts to try to build a constructive relationship; realpolitik has re-emerged as the reality of China’s recalcitrance has sunk in.

As Crikey as previously noted, while Chinese aggression in the South China Sea is egregious and poses longer-term problems, it is cyber warfare that is the most immediate threat. The two sides were hoping to reach a detailed agreement on the trip; that now looks unlikely.

But it’s the Chinese economy, of course, that most concerns Australia. The problem is that China’s currency, given its economic situation, would likely fall in a free float. It has also dawned on the US that the Xi administration is not charging ahead with economic reforms promised two years ago.

For Australia, the sliding and restructuring of the Chinese economy will continue to pummel our own, and the lack of reforms will make it more difficult for Australian companies to crack non-resources-based areas, booming agricultural produce sales aside.

Policymakers and the slow-on-the-take-up bureaucrats in Canberra have underestimated China’s problems. The unwarranted optimism that Joe Hockey has continued to spout about China right up to his timely demise suggest the warning signals have not been strong enough.

China is not about to collapse, but its real growth is now or headed towards 4%-5% about year,  half what it was for preceding 20 years. Its top leaders — including Xi — are all now admitting that the place is in a fair bit of trouble. Undertaking, or more correctly, being forced into massive adjustments of economic drivers such those China is now experiencing is no teddy bears’ picnic, as China’s leaders are fast coming to realise.

The masses of middle-class Chinese people who were going keep the economy pumping at 8%-10% simply do not, at this point, exist — hence the ghost cities, empty shopping malls and plane-less airports.

This, of course is why new PM Malcolm Turnbull (has he uttered the word mining since he took office?) has flicked the switch to technology and innovation.

The upside for Australia is that as China falters, increasing numbers of Chinese are looking for escape routes, and Australia is pretty high on the list. And, thanks again to the Chinese, as property becomes more expensive for Australians, people from China are not seeing the same price hikes as their currency stays relatively stronger than ours.

The raw investment numbers tell the tale: according to new figures released this week by research group Kroll, China has become Australia’s chief source of approved proposed investment, supplanting the United States for the first time. Chinese investment in Australia increased 75% from US$11.3 billion in 2013 to US$19. billion in 2014. And the bulk of this — a cool US$8.8 billion — was in property

Protests against Xi in Washington Friday (US time) by all sorts of groups are planned against the appalling repressive polices of the Chinese government. They do not just affect the Chinese. If Thailand’s police forces are to believed (and that’s only a maybe), Muslim groups, including people from the Chinese Muslim Uyghur community who have been radicalised by Communist Party oppression, are responsible for the August bomb blast in central Bangkok that killed 20 people.

So perhaps self -interest at least will force Australia to start taking a more consistent and public line against China’s human rights abuses, in lockstep with our close ally the United States.