Thank goodness, there is still plenty of sexism about

Are Australians actually curbing their sexist behaviour so they won't be called out in the Ernies? 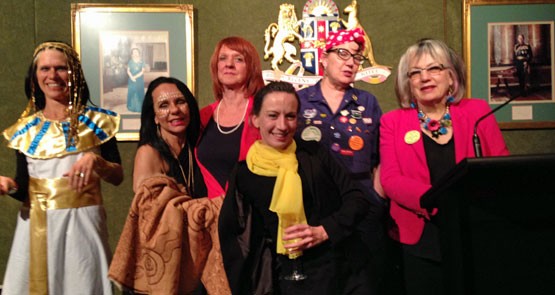 Have the Ernie Awards become a victim of their own success? Has the campaign to shame public sexism had the effect of actually reducing sexist behaviour?

Ernie Awards convenor Meredith Burgmann raised this possibility last night when announcing the Judicial Silver Ernie, usually a goldmine of material — who could forget “rougher-than-usual handling”? “The Judicial Ernie used to always win the Gold Ernie because judges just said terrible things. But these days it’s hard to find nominations in the area, and we now have to include police and litigants,” she said.

Similarly, trade unions “have cleaned up their act”, and the nominees for the Industrial Ernie were mainly organisations or businesses rather than individuals, Burgmann said. Could we see the day when the Ernie Awards are cancelled due to lack of material?

Well, no, because one category that never runs out of material is the Political Ernie, which is always a mile long. This was won last night by former prime minister Tony Abbott, who, when asked to nominate his greatest achievement as minister for women replied “repealing the carbon tax”. He was also nominated for going to a fire station on International Women’s Day and receiving an award for his volunteer services. I think it’s safe to say that for this audience, the Mad Monk will not be missed.

Runner-up in this category was government whip Scott Bucholz, who asked Assistant Treasurer Kelly O’Dwyer to express more breast-milk so she could attend a parliamentary sitting.

The other big news of last night’s awards was that there is an Ernie Awards musical in development and also that NSW Labor politician Penny Sharpe is starting up a LGBTIQ version of the awards, which will surely have excellent cocktails.

Last night’s dinner was held at New South Wales Parliament House with about 300 women and a few men. The awards were started in 1993 by Burgmann, then a NSW Labor politician, and others to celebrate the retirement of the Australian Workers Union secretary Ernie Ecob, who had said that women only wanted to be shearers for the sex. Burgmann replied: “But that’s what we thought the sheep were for.” The awards (motto: Keep Them Nervous) have grown so popular over the past 23 years that there are now several categories, with a Gold Ernie for the best overall winner.

Winners are decided in a “boo-off”, with the guests loudly booing the nominations. If it’s a close result, the final two are read out, with “boo monitors” deciding the winner. There’s always a dress code – this year, as it has been 25 years since the late Joan Kirner became premier of Victoria, we were asked to come as our favorite female leader. This led to an outbreak of spots (Joan’s trademark), a few Julia Gillards, but my absolute favorite was the woman who wore a black pantsuit, tied a long yellow scarf around her neck and came as Jacqui Lambie.

The overall winner, the Gold Ernie, was given to Football Federation Australia for paying the Matildas only $21,000 per year and for refusing to pay them maternity leave.

The Media Ernie is also a full category, but do we have to include Piers Akerman, Ray Hadley and Steve Price — aren’t they just trying a bit too hard? If Piers Akerman can out Peppa Pig for “pushing a weird feminist line”, isn’t he just too silly to be counted? Anyway, this year it was won by The Australian newspaper’s obituary page for beginning its obituary of award-winning author Colleen McCullough: “Plain of feature and certainly over-weight …”

The Industrial Silver Ernie went to Soho Nightclub, which, a week after the owner’s son was convicted of a notorious sexual assault on the premises, produced a highly offensive ad. In it, a scantily clad young woman appears to be passed out on the ground with her legs slightly spread and her fingers gesturing a peace sign. After a backlash on Twitter, the ad was taken down; the nightclub has since closed.

The Judicial Silver Ernie was won by Detective Inspector Michael Hughes, who, speaking after a murder, said that women needed to take precautions not to be randomly attacked, including never being in a public park by themselves.

The boos for the Clerical Silver Ernie (The Fred) resulted in a dead heat between serial nominee Fred Nile MP for referring to childcare centres as “day orphanages” and school principal Omar Hallak, who reportedly banned female students from participating in running events because it might cause them to lose their virginity (he later denied it).

The only category not to be decided by booing, the Good Ernie, goes to the man who says something supportive of women. Last night it was won by former AFL player Luke Ablett, who said, “Another woman killed by a man and we are talking about why women shouldn’t walk in parks. What is wrong, Australia?” Runner-up was Today Show presenter Karl Stefanovic for highlighting sexist double standards by wearing the same suit for a year (and no one noticed).

All up, another fabulous night and yet another sore throat from all the prolonged booing. Cory Bernardi, I hope your ears were burning.

Women ‘getting pissed and making fun of men’? Fabulous

Margot’s not often inaccurate (thankfully) however, she’s missed the GLORIAS – the diverse in gender and sexuality version of the ERNIES that Penny Sharpe MLC has actually been running for several years now and currently has nominations open for the awards night in November. Piers Akerman will be pleased to note just how often he appears in both award night lists.

Isn’t saying there’d be fabulous cocktails at the lbtgq night a bit stereotypical?

always a spot of fun in a depressing landscape

Thanks! I didn’t know about the Glorias but do now.