The Pope touches down in Washington, D.C. And other media tidbits of the day.

The tyranny of print deadlines. Today’s Power Issue of the AFR Magazine was compromised by the surprise ousting of Tony Abbott as Prime Minister, as has been widely reported. The annual list originally designated Abbott as the most powerful person in the country, with his chief of staff Peta Credlin as the third most powerful person, and the pages were printed — but not bound — before the coup last week. The list published online today has been adjusted, as has the front page of the magazine, but the list in the magazine still has a full-page picture of Abbott as top dog. Malcolm Turnbull is now listed as the most powerful person, with his deputy Julie Bishop getting a boost from 13th to third. The magazine also features an insert with the revised list, analysing the transfer of power that went with the leadership coup.

Mumbrella‘s Tim Burrowes has slammed the decision to print the magazine with the outdated list, writing that it shows that cost factors have outweighed credibility:

“The unspoken rule used to be that if you had time to do something about it, you did, even if it was expensive. (I’ve worked on magazines that reprinted after the publisher decided a headline was too saucy; even this month we reprinted a conference brochure after spelling somebody’s name wrong.)

This time, Fairfax decided that the cost of credibility was too high. It’s the most extreme example I’ve seen to date.

Welcome to the new economics of the newspaper industry.”

This is not the first time this year the list-makers at the Fin have been caught by late-breaking news. In May, Gina Rinehart lost almost $6 billion of her wealth in a family court case days before the BRW Rich List was due to be released. She still managed to keep top position though. — Sally Whyte

Good news in the Mail. There was the sliver of good news among another gloomy trading update from the Daily Mail and General Trust in London overnight (it owns the Mail Online, the world’s most visited news website). The weak ad situation for its newspapers first mentioned in the July update has continued, but there have been signs of an improvement in the last four years as under-pressure UK supermarkets fightback with an ad blitz against super discounters Aldi and Lidl.

The company’s management said underlying ad revenues were up 5% in the last four weeks because of what are being called the UK “store wars”. But the improvement will have to step up and continue to offset another weak performance so far in the company’s financial year, which ends on September 30.

The overnight update reported that ad sales at the Daily Mail and Mail on Sunday remained under pressure over the summer, down 11% or 19 million pounds (or well over $40 million) in the first 11 months of its financial year to the end of August. And DMGT said a strong performance at its Mail Online arm — where ad sales jumped 16% or 9 million pounds (more than $20 million) in the year to date, was not enough offset the tough print newspaper trading.

Sales were down 4%, despite a 10 pence hike in cover price to 1.60 pounds at the Mail on Sunday in April. The falls in revenue and circulation left overall sales across the Mail business 5% lower over the first 11 months to the end of August, while at its wider DMG media division, which holds the Mail business as well as the Metro free-sheet, underlying turnover dropped 3%.

In another big development, the Mail Online has poached one of Britain’s most abrasive right-wing commentators from the Murdoch clan’s The Sun. The Guardian reports this morning that Katie Hopkins will leave The Sun at the end of this week to start at the Mail Online in November:

“The columnist, who most recently sparked outrage by comparing migrants crossing the Mediterranean to cockroaches, is believed to have been attracted by the opportunity to publish her views to a global audience. ‘I’m delighted to be joining Mail Online,’ said Hopkins, confirming the move. ‘I can now write columns that immediately respond to the news of the day. I’ve been tremendously impressed with Mail Online’s digital footprint and I look forward to adding my voice to their ever-growing audience.'”

Video of the day. The Australian Border Force has shared a “case study” of a greenie “radical” Karen, who seems very amused by all the attention (see story above). In that spirit, we present to you this video of “radicalised” Zoe, who, along with five other activists, scaled Shell’s Arctic drilling rig, the Polar Pioneer, in the Pacific Ocean as part of a Greenpeace protest. Who knows, Zoe, with impressive feats like that, surely it won’t belong before the ABF puts your name up in lights. 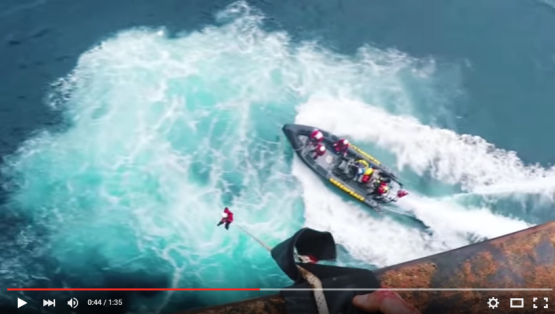 Front page of the day. Mr Bergoglio goes to Washington. 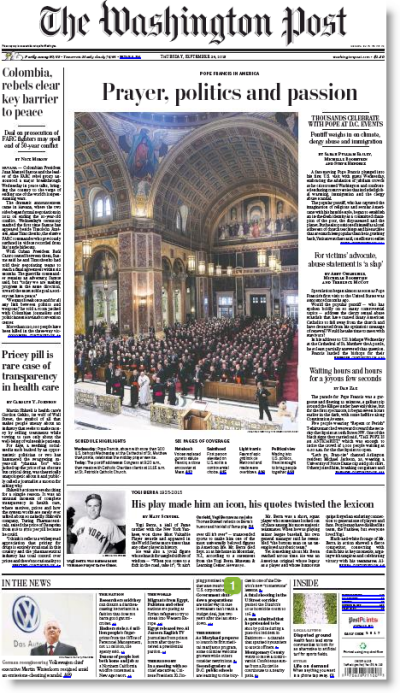 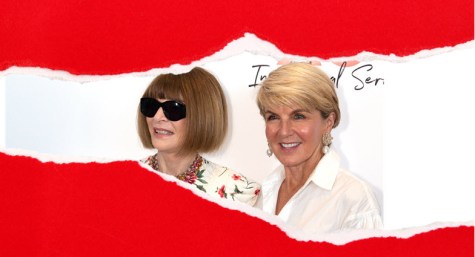 How much has this latest Keystone Border Farce Cops episode cost us?
Please tell me the ABC hasn’t been reduced to making another series of “Yes Prime Minister(Abbott)” and we’re all part of it?