Bust out the black lipliner, Treasury’s going back to the ’90s

The head of Treasury seems obsessed with slashing and burning the budget and industrial relations -- regardless of the facts, Bernard Keane and Glenn Dyer report. 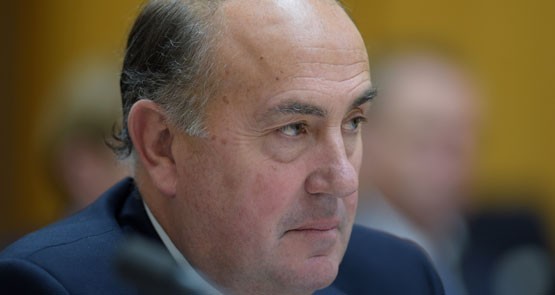 It seems clear that Treasury secretary John Fraser regards the ascension of Scott Morrison as a great opportunity to reset economic debate — reset it back to the early 1990s.

A couple of months ago we noted how Fraser — who grew up, in career terms, in the Treasury of John Stone (the reactionary Treasury secretary who went on to become a Nationals senator) — seemed to be intellectually stuck in the 1990s, before climate change was a policy issue, back when the reform mantra was to slash spending and deregulate industrial relations.

Both of those agendas ground to a halt under former treasurer Joe Hockey — spending actually rose as a proportion of GDP compared to the Labor years, and the government ran a mile even from the relatively anodyne recommendations of the Productivity Commission’s draft report on industrial relations reform. But now Fraser has a new Treasurer to shape into his own throwback image.

This is what he reportedly told the Australian Financial Review’s Geoff Kitney in a piece published today — bearing in mind Kitney has paraphrased much of what he said:

“Tight budgets in Ireland and Britain — which were condemned by critics as taking ‘austerity’ measures — led to strong economic growth and this showed that ‘tough policies can beget good growth’, Mr Fraser said. The Ireland economy is now expanding at more than 6 per cent and Britain at 2.6 per cent, more than double the euro-area economy. Mr Fraser said the performance of the US economy, which has unemployment of 5.5 per cent compared with Australia’s 6.4 per cent, was ‘testimony to their more flexible product and labour markets’.”

Let’s subject that to a bit of a reality check. Since mid-2012, the UK has averaged growth of 2.1%, compared to an average of 2.5% here. And the Tories proved no more successful at cutting the UK deficit than Hockey proved at cutting our own. The UK deficit actually went up in 2013, to 8.3% of GDP; in August this year, there was a big fall in receipts, which means Chancellor of the Exchequer George Osborne is unlikely to meet his goal of getting the deficit down to 3.7% of GDP this year. In comparison, Hockey’s 2014-15 deficit was 2.5%, and this year’s forecast was 2.1%.

Unsuccessful at deficit-cutting, unsuccessful at growth — but Fraser thinks it’s a model anyway. Ireland has indeed returned to strong levels of growth, and true its deficit is no longer 32% of GDP (created by the need to bail out its banking sector), but it’s still over 4% of GDP this year, and unemployment is still 9.5%. As for the US and its lower unemployment rate, it’s still running a deficit of 2.8% this year — following deficits of 10.1% of GDP, 8.5% and 4.1% since 2012. A 2.8% budget deficit here would be another $11 billion pumped into the economy; a deficit of 8.5% last year would have seen an extra $940-oddbillion pumped into the economy.

This isn’t the first time Fraser has invoked the UK and US experiences as a guiding light for Australia to follow. Indeed, Fraser seems quite enamoured of the Cameron government, lauding its policies on labour markets and education in other speeches as well.

But Fraser’s argument is a little hard to follow — austerity is apparently the way to higher growth and lower unemployment, except all the examples he cites had massive deficit spending far above our own.

Fraser also seems to think we need US-style industrial relations laws, seemingly, despite both the Productivity Commission and the Reserve Bank going to pains to note flexibility of our current workplace relations framework. Indeed, the RBA repeated this just yesterday, with its head of Economic Analysis, in a discussion of the bank’s business liaison program, saying

“Liaison tells us that wages are playing a more significant role in the adjustment of the economy to the lower terms of trade and the transition from the investment to the production phase of the mining boom than they have in previous episodes of structural adjustment. For example, the recent emphasis on cost cutting in the mining sector has led to job losses, but there are also many examples of mining and mining service firms negotiating lower wage outcomes with existing workers and employing new workers on significantly lower wages to help keep mining operations open in the face of significantly lower commodity prices.”

The Reserve Bank can see the flexibility in the economy and the workplace that Fraser struggles to see. Perhaps he’s forgotten what it looked like — he spent a decade working at the most inflexible of organisation, a Swiss bank — UBS — which had to be bailed out after losing more than US$60 billion in numerous US investment adventures. That’s despite him sitting on the RBA board and attending the board meetings where this flexibility has been discussed (we know that because the low wage growth and work place flexibility is mentioned in board minutes). Perhaps Fraser disagrees with the RBA’s view? Or perhaps he prefers not to let the facts get in the way of ideology.

It will be interesting to see how long John Fraser lasts as head of Treasury. His Stone-Age past and his apparently selective approach to economic data suggests that it won’t be long before he collides with the broader-minded econocrats in the PM’s department.

Yet further proof, were it needed, that economists only exist too make astrology seem dependable.

Further proof that economics is bullshit and that the people who appointed this nincompoop are idiots ie Abbott and Hockey, no doubt with help from Credlin.

Thank you gents; I read these articles and I am certain many like me despair of the paladins helm of this country.
There is one ray of hope though…
“Fraser also seems to think we need US-style industrial relations laws, seemingly, despite both the Productivity Commission and the Reserve Bank going to pains to note flexibility of our current workplace relations framework.”
Do I hear a Workchoices Mk2 being suggested? It lost one prime minister his seat and government, another will go the same way, Messiah or not, if he is so stupid to got that track.