Will he or won't he? Turnbull, so far, upholds his predecessor's approach to same-sex marriage. 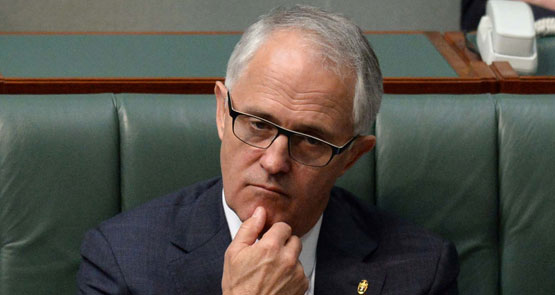 Despite Prime Minister Malcolm Turnbull suddenly supporting Tony Abbott’s expensive “people’s vote” on same-sex marriage to be held after the next election, the Greens are still hopeful the pro-gay marriage Prime Minister might let the Parliament decide before then.

Turnbull defended his about-face on the issue, saying:

“Why is the opposition afraid of the people having a vote? Why don’t they want all Australians having a vote? There is no greater virtue in a free vote here or a plebiscite. They are each means of resolving the matter. One of them, I grant you, is more expensive. Nonetheless, it is a very legitimate and democratic way of dealing with it.”

Expensive, it will be. The Australian Electoral Commission has estimated that the cost of a plebiscite held outside of a federal election would be $158.4 million. Before Turnbull became prime minister he argued that a plebiscite was the wrong decision, as it would mean that the issue of same-sex marriage would be a “live issue” plaguing the then-Abbott government right up to and into the next election campaign. But in order to keep the far right of his party from revolting, Turnbull has jumped on board Team Plebiscite (along with Team Direct Action and Team Monarchy).

At the same time last week, the Greens reshuffled portfolio responsibilities, giving LGBTI issues to incoming Greens Senator Robert Simms. Simms is replacing South Australian senator Penny Wright for the remainder of her six-year term, and he will be up for re-election at the next federal election.

Simms told Crikey he hoped the change of PM would mean there would be room for a new policy on same-sex marriage.

“[Turnbull] doesn’t have the bizarre kind of ideological opposition to marriage equality that Tony Abbott had. With Tony Abbott out of the picture, I think there is the opportunity for the Parliament to have another look at it, and I hope Malcolm Turnbull gives his colleagues a free vote and allows the Parliament to decide,” he said.

Simms said that Australians wanted to know when the switch was made from Abbott to Turnbull, it wasn’t just “swapping Speedos for a suit” but was making a significant policy change.

“This would be an opportunity for Malcolm Turnbull to do that. His rhetoric over the past week has been to push the issue into the never-never, but I don’t think that will wash with the Australia people. People actually want a change of direction because [Abbott’s] policies were so out of step with the Australian people.”

Essential polling this week, however, showed that even among Greens voters, there is strong support for a plebiscite. A total of 67% of all voters back a national vote, versus just 21% wanting it to be decided by Parliament. For the Greens, this sits at 29% for a vote of the Parliament, and 64% in favour of a plebiscite.

There is hope within Turnbull’s own party for an acceleration of the issue. Key backer of the cross-party bill for same-sex marriage Warren Entsch told the ABC he was hopeful Turnbull would look to bring a plebiscite on sooner rather than later, as Abbott had planned.

A Senate report into the issue of a plebiscite from a committee of mostly Greens, Labor and independent senators recommended last week that the government move to immediately introduce marriage equality legislation for a vote in Parliament. The report was criticised by committee member and anti-gay marriage Liberal Senator Ian Macdonald. In his dissenting report, criticising the conduct of the committee, Macdonald inadvertently made the case against holding a plebiscite:

“This is another inquiry which has been an absolute and blatant waste of taxpayers’ money, of valuable and increasingly challenged Senate committee staff time, for an outcome which was predetermined and which sheds little new evidence, thought or debate to a question that has been in the public domain for many years.”

Simms will give his first speech to the Senate on October 13, and he joins the Senate after an extensive career in politics and education, working at Flinders University, and in the offices of Greens senators Scott Ludlam and Sarah Hanson-Young.

While Simms has the LGBTI portfolio for the Greens, Janet Rice will keep responsibility for transgender issues. Simms, most recently an Adelaide City councillor, is working to build his profile nationally in the run-up to the next election, and has controversially been given the education portfolio from Lee Rhiannon to help achieve that aim. Crikey reported earlier this week that the New South Wales branch is considering withdrawing its federal election funding unless Rhiannon is restated into the portfolio. Simms would not comment on the issue, but said he would continue to work with all of his colleagues in his portfolios.

Bob Hope once used the “I’m leaving before it becomes compulsory” line after California decriminalised male homosexuality. Probably thought it a pain in the arse.

So the Electorate now decides who has rights and who does not?

The electorate always decided that through their representatives.

Turnbull is operating like a reverse version of the NBN he helped butcher.. ideas at fibre speed that are then noded down to dial up for his party acolytes..the proposed public vote on marriage equality has every liklihood of becoming a $160million dollar poofter bash..Truffles is starting to look like a Bentley car salesman who could only find work selling Hyundai’s.. or in the case of direct action Lada’s…