Is Hockey going to be named ambassador to Japan? ... will Cory leave the Libs? ... BOM under threat ...

“There is increasing talk in diplomatic circles that Joe Hockey may not be the lock for the US Ambassador’s job that has been reported. As one former senior diplomat said just last night ‘You make deals over London or Paris, not Washington’. Conjecture, and it just that at this stage, is that Michael Thawley, the man Peta ‘two years in a leaky boat’ Credlin brought back to government from his life in US private enterprise to head the PM’s Department, may go back to the job he had under John Howard. It’s a role that needs top drawer gravitas and credibility (Joe Hockey anyone?) and story goes that Thawley has the deep relationships in Washington that would return Australia to DC’s top tables, something the country has struggled to do since Kim Beazley took over, the snipers add.

“The Japan envoy’s job is open now, as well, and more than person has noted that might suit the soon to be former member for North Sydney a little better. As important as that post is, it’s still more about trade and economics — things Hockey knows at least a bit about — than defence and diplomacy. Of course it could just be collective wishful thinking.”

We’ll keep you posted on the postings.

‘Culinary Sharia’ and Bernard Gaynor. Liberal Senator Cory Bernardi has left the door open to leave the Liberal Party, as in yesterday’s weekly newsletter to his supporters he said that conservative voices shouldn’t leave politics:

“Whilst it is easy to walk away, conservatives simply cannot vacate the public square. Our voice is needed now more than ever to ensure the customs, traditions and conventions that have built our civilisation are protected for future generations.”

He didn’t mention the Liberal Party or Malcolm Turnbull at all in the newsletter, saying:

“Political engagement is a critical part of the process — both within the formal party structures and through external organisations. But we must also engage the vast majority of the community who are not politically minded.”

So while we’re still left wondering, Bernardi heads up yet another day of hearings for the third-party food certification inquiry today, focusing on what he wanted it to be on all along — halal certification. The Australian Crime Commission and the Australian Competition and Consumer Commission appeared this morning, with former Senate candidate for Family First and secretary for Katter’s Australia Party Bernard Gaynor appearing this afternoon. Gaynor will address his 221-page submission, titled “Halal Certification: Behind the veil of culinary sharia”.

Gaynor writes that his submission shouldn’t be seen as anti-Islamic, because he’s against religious certification of any food, but he starts by saying the first Islamic terror strike on Australian soil was in 1915 and moves onto saying Man Haron Monis attacked the Lindt Cafe in Sydney because it wasn’t halal. We wish we could tell you more, but we couldn’t really bear to read much further. 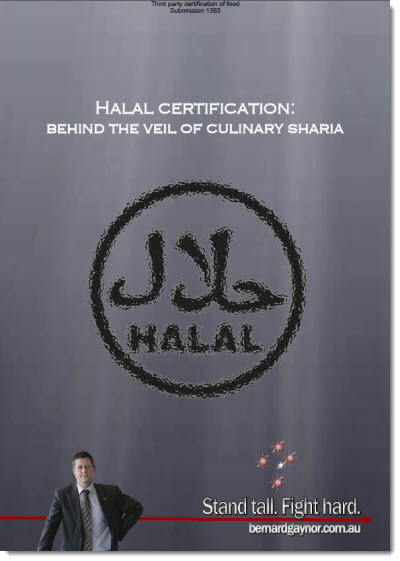 The inquiry is also hearing from Wayne Karlen, who lodged a complaint against former Fairfax columnist Mike Carlton last year with the Human Rights Commission, saying Carlton’s article and the cartoon accompanying it caused offence to Australian Jews. His submission encourages  the Senate inquiry “to make it clear to the public that foreign laws including Islamic Law have no standing in Australia and that the Australian Government will not bow to Islamic Law or other foreign laws with respect to Third Party Certification of Food in Australia”.

BOM shelter. Documents obtained by the ABC through freedom of information laws show that Tony Abbott’s own department discussed investigating the Bureau of Meteorology over reports in The Australian that the agency was exaggerating the effects of climate change. Weeks after the reports, which the Bureau of Meteorology denied, Abbott’s office considered whether it could use a task force to do “due diligence” on the bureau’s records, a move that was rebuffed by Environment Minister Greg Hunt. Crikey has previously reported that Bureau of Meteorology staff felt under pressure to play down the effects of climate change, with a high level of scrutiny on reports about weather events — if Abbott had succeeded, the pressure would have been even more acute.

PM for rich gays, according to Katter. While we’ve heard quite a bit from the Senate crossbenchers about the change of leadership in the government, very little has made it to the mainstream media from independent federal MP Bob Katter. And that’s probably a good thing. Katter attacked new PM Malcolm Turnbull’s proposals for innovation and liberalism in local newspaper the Herbert River Express last week:

He also said that poor people didn’t have the luxury of innovation. “Malcolm couldn’t have sent out two worse messages — innovation and liberalism — that’s a luxury that a rich person can get away with, but the poor will punish the people in power.” 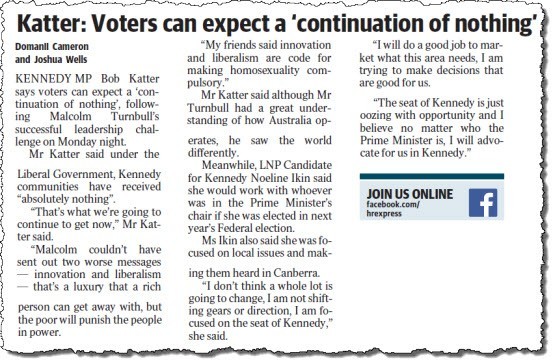 Yes, they share the boats. Yesterday we reported that the Australian Border Force had transferred two of its brand-new Cape Class patrol boats to the navy, and a tipster told us that it was because the ABF did not have the staff to crew all eight boats that had recently been handed over to the new paramilitary agency. Border Force media got back to us confirming that two boats had been transferred, but denied that it was because they didn’t have the budget or staff to run the boats.

A spokesperson told Crikey that the Cape Byron boat had been on loan to the navy since July this year, and another would be on loan from October 1, with both vessels returning to the ABF at the end of next year:

“ABF works closely with ADF in protecting Australia’s borders. In particular the ABF Marine Unit (formerly Customs Marine Unit) and the RAN have long standing and complementary capabilities which form a core part of Australia’s border protection arrangements. The temporary transfer of two Cape Class vessels to RAN operations will further enhance inter-operability of personnel and equipment to meet this goal.”

Crikey understands that the navy’s Armidale class patrol boats are still not up to scratch, after it was reported last year that they were “riddled with defects”. So while the ABF maintains that it has the budget and the crew to run the boats, its resources are almost one and the same with the navy.

Border Farce Rules. Speaking of Border Force, the transition from Customs to Border Force has been anything but smooth, but this piece by Australian cartoonist and comedian Jason Chatfield, published this morning, shows just how the changes are affecting service delivery. Chatfield’s passport was confiscated because the United States government, in accordance with protocol, had trimmed a few millimetres off his photo in order to indicate he was an Australian citizen but a US resident.

He squinted at the fat photo of 21 year-old me, then back at the tired, bedraggled 31 year-old me standing in front of him.

He said ‘Remove your glasses please sir.’ I obliged.

He then said, ‘Well this is your passport, but I’m confiscating it. It’s been tampered with and that’s a Federal Crime.’

Read the rant about the Border Farce. I get that they are idiots, but, seriously, do you think the US would put up with other nations cutting bits off their passports? Who the f*ck do the Yanks think they are taking bits off pages of foreign nationals’ passports?

Abbott’s gleeful knee-JERK reaction to Newman’s hubris is reminiscent of Howard’s attack on the CSIRO.

Thanks for the lead on Gaynor’s submission re ‘culinary sharia’. I looked it up. What an outstanding literary work, setting a standard of writing and analysis not seen since…I don’t know, maybe since research, analysis and cogent arguments were invented. Seriously, do these people have staff? Library access? Critical faculties?