Donald Trump has cracked it with Fox News. And other media tidbits of the day.

Mitchell’s junior to Oz Media. According to a well-placed source, the Oz will soon announce a new journalist on its media desk. We hear Fin Street Talk editor Jake Mitchell — who is the son of Oz editor-in-chief Chris Mitchell — has been lured to the broadsheet. We tried to firm this up asking everyone you would expect to know first thing this morning, including the editors of both papers, Jake Mitchell himself etc., but no one got back to us before deadline.

The section has been somewhat depleted in recent years. Media and marketing writer Lara Sinclair left a few weeks ago — it’s now down to editor Sharri Markson, Darren Davidson and Michael Bodey.

We would say it must be tricky reporting on media when your dad is one of the industry’s most powerful figures, but Mitchell has done it before at Fairfax — he used to be one of the Fin’s media writers. He moved off that round and onto Street Talk in September last year, as Crikey reported at the time. — Myriam Robin

Woz Bolt that won it. Lots of people have been saying the influence of tabloid columnists like Andrew Bolt is likely to decrease under a Turnbull government. This morning, Andrew Bolt’s column says that’s not the case at all — saying it was he and fellow shock jock Alan Jones that “housetrained” Turnbull, after all.

“So, yes, I should feel like Samson after a haircut. But here’s the funny thing. We’ve actually won. Me and Alan. We’ve house-trained Turnbull.

“Remember what Turnbull used to be like? He headed the Australian Republican Movement and even donated to Labor’s campaign against the Howard government. He trashed opponents of same-sex marriage. He backed Labor’s carbon tax.

“But we knocked him into shape, Alan and I. Now behold our neo-Turnbull. This new model refuses to back Labor’s carbon tax and promises to let the public, not the politicians, decide on same-sex marriage.”

You can read the rest of Bolt’s ideas on how to housetrain PM’s here. — Myriam Robin

You’ll never believe it. Mamamia says it’s quitting clickbait, according to a guest post on Mumbrella by the network’s head of editorial strategy Kate Spies:

“The clickbaiting trend is well on its way out. The feedback we are getting from our readers is that they want to be served genuinely interesting content that engages them; they’ve had enough of clickbaiting.”

Over to you Fairfax. — Myriam Robin

Veiled digs galore. A key factor in the decline of print media journalism has been the “slow, hubristic, determinedly ponderous response by established print media journalism companies to the gigantic evident changes in consumer behaviour and revenue value”, Kim Williams said in a speech yesterday. “This slow, often rejectionist response has challenged their very survival. There is a serious question mark hovering over whether many print media companies do indeed have the relevant capability to innovate and genuinely reinvent themselves.”  — Read the full piece on The Mandarin

Danby strikes out. Labor MP Michael Danby has this ad in the Australian Jewish News today … 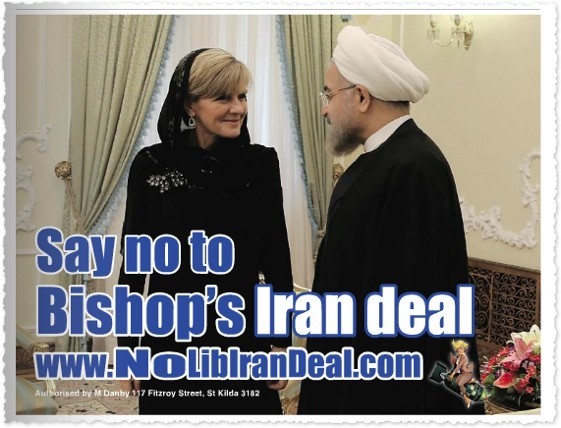 You’ll note there’s no Labor Party logo on the ad, and for good reason — Labor has expressed “grave doubts” about intelligence sharing with Iran but not opposed negotiation completely.

Danby yesterday issued a press release on his own opposition to any deal. “While claiming to be Israel’s friend, the Liberals appear intent on speeding up Iran’s passage from pariah to international acceptability despite the fact Iran has done little to show the world it deserves losing pariah status, ” he said in the release.  “Malcolm Turnbull can be a friend of Israel or a friend of the dangerous Iranian regime. He cannot be both.”

Labor’s actual foreign affairs spokesperson is Tanya Plibersek. Her last statements on the deal were in June, where she said any deal needed to curb Iran’s nuclear ambitions. — Myriam Robin

Lovers’ tiff, temporary separation, or perhaps even divorce? Donald Trump has announced he won’t darken a Fox Cable News TV studio, again. Have the Murdochs and their Fox News cable behemoth lost their capacity to strike fear into the hearts and minds of Republicans of all stripes, or just the billionaire big wig?

Trump, who is leading the slowly shrinking pack of Republican presidential hopefuls, tweeted last night (our time) that he won’t appear on any of the Fox network’s shows “for the foreseeable future”. He accused Fox News of treating him “very unfairly”. That’s a bit rich coming from the Donald. After all, he said some pretty nasty things about Fox host Megyn Kelly, in and after the first debate screened by Fox in August. And he has said some pretty nasty things about other candidates, the media, Mexicans and other hispanics, foreigners generally and people who speak Spanish.

This week he’s been at it again. On Tuesday night Trump again got into host Megyn Kelly, calling her a “lightweight” and suggesting she take a vacation. That was after Monday night telling Fox host Bill O’Reilly (the doyenne of Fox hosts) to have some “knowledgeable talking heads” on his program instead of “Trump haters”. So Trump is redirecting his TV appearances. Last night he was on The Late Show with Stephen Colbert (which he apparently liked and praised today). Next Sunday night he is on 60 Minutes in a sit-down interview.

And the reaction from Fox? Well, a spokesman told the media Trump’s attacks on the likes of Megyn Kelly and The O’Reilly Factor were “stale and tiresome”. The spokesman continued that Trump’s decision to no longer appear on the network was a knee-jerk reaction to being dropped from O’Reilly’s show today. Trump “doesn’t seem to grasp that candidates telling journalists what to ask is not how the media works in this country”.

Now what is interesting will be the reaction from the real powers at Fox: network head, Roger Ailes, and the men to whom he reports, namely Lachlan Murdoch, James Murdoch and of course Big Daddy Murdoch. Are the Murdochs willing to “divorce” the Republican frontrunner at this stage, and deprive themselves of any clout if Trump happens to win the nomination?

Video of the day. Peter Greste’s colleagues secure a pardon in Egypt, as he found out last night while wrapping up the pre-recording of The Chaser’s Media Circus on the ABC. The episode airs tonight, but the ABC released this clip early … 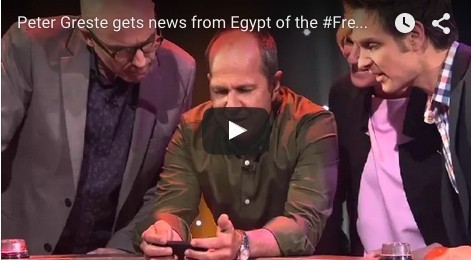 Some commentators have been remarkably direct in weighing up human lives against the numbers.

“I may come out tomorrow if I can find me a quote that scares,
Oh, I’d step out in style with my sincere smile and my dancing bear.
Outrageous, alarming, courageous, charming
Oh, who would think a Blot and bear
Could be well accepted everywhere
It’s just amazing how fair people can be

Seen in the rightest papers where shock-jock faces all shop to share
Making the grandest entrance is Andrew Blot and his dancing bear
Believe us, won’t they?
They heed us, don’t they?
Oh, who would think a Blot and bear
Could be well respected anywhere
It’s just amazing how fey people can be

Once again Michael D Danby falsely infers that he speaks on behalf of the Australian Jewish community regarding Australia’s engagement with Iran.

For the record, Danby speaks only on behalf those dwindling numbers of Aussie over 60’s Zionist bigots, who accept every foreign policy pronouncement coming out of the appalling ethnic cleansing/apartheid Israeli Government led by the accused war criminal Netanyahu.

It’s estimated that more than 60% of Australia’s Jewish community of 115K strongly disapprove of Israel’s human rights breaches against the Palestinians, and want an end to the illegal occupation & the return of East Jerusalem to its rightful Palestinian inhabitants.

Of course you won’t be surprised to learn that my repeated approaches over the past 2 years to the Executive Council of Australian Jewry (ECAJ) that an independently run poll of Australia’s Jews on this topic, has received no response.

“Tanya Plibersek. Her last statements on the deal were in June, where she said any deal needed to curb Iran’s nuclear ambitions.” This quote perfectly encapsulates the problem Australia (and its media) have in assessing issues regarding both Israel and Iran. What precisely are “Iran’s nuclear ambitions”? All 16 US intelligence agencies have twice unanimously reported that Iran ceased its nuclear weapons research in the 1990s and was not interested in its resumption.
Israel on the other hand has the world’s 4th largest stockpile of nuclear weapons. No Australian government of either coloration dares to even mention this fact.
Add to this the fact that only two weeks ago Australia was one of only 8 nations (along with Israel, Canada, the US and four colonies of the US, to vote against flying the Palestinian flag outside UN buildings. It is not too hard to infer who which tail wags the Aussie dog on matters relating to the Middle East.

Looks like Chris Mitchell has scored a KO as Bolt has buckled so soon. Bolt has totally dissembled in next to no time. A wonder to experience! What more could I hope for?

Thanks to Kevin Herbert for giving us Crikey readers a perspective from the mainstream Jewish community.

Anyone who has any doubts as to the appropriateness of the rapprochement with Iran only need look at those who miserables who are steadfastly opposed to the deal: Saudi Arabia, Israel & the US Tea party Republicans… oh & Michael Danby.